The First Trip After COVID

I once interviewed an Iraq war vet who confided that when you are in a war zone your brain focuses entirely on one thing — surviving. It's afterward that the impact of the emotional toll hits you.

For well over a year the COVID-19 pandemic has forced us into a survival situation as we were constantly informed about infection spikes, death counts, hot zones, color codes and safety protocols. We washed vegetables as if they were radioactive, fought over supplies of toilet paper and bathed in hand sanitizer. We heard about dreadful symptoms and were convinced we had all of them. And a new term entered our collective vocabulary, "long-haulers."

Now, as we emerge from the darkest hours with mass vaccinations that allow us to return to more of a degree of normal activity, it's time to play catch-up — like traveling on a plane for that long overdue family reunion.

For our family that meant gathering to celebrate my nephew Dylan's 30th birthday, my brother-in-law George's 70th, Thanksgiving, Christmas and New Year's all in one. And that required that I fly from Los Angeles to the Bay Area.

What I quickly discovered was that the waves of anxiety that passed once I had my second vaccination came flooding back. I suddenly forgot how to pack, how to order a Lyft pickup, how much time to allow to get to the airport, check my bag and get through security. What would the health protocols be? How much time would they require? Would they ask for my CDC card as proof of vaccination? Would they take my temperature before I was allowed to get on the plane? Would the center seat be filled? Every detail seemed to increase my apprehension for what I was about to do.

To my surprise, the airport — at least at the Southwest terminal — was practically deserted. Security (I do have TSA Approved) took no time at all. No CDC check. No temperature control. In fact, the security personnel seemed happy to have something to do.

After breezing through the security check, I strolled down usually bustling walkways with hardly anyone in sight except the gift shop display featuring bobble-head dolls of Joe Biden and Kamala Harris that greeted me with forever frozen smiles.

Obviously having allowed much more time than I needed, I decided to stop at one of my favorite lounges for breakfast — the Rock & Brews — with its multiple TV screens that traditionally blast concert footage. The normal seating area was entirely cordoned off, and a young woman directed me to the man behind the massive, totally empty bar. He offered to sell me one of three pre-cooked sandwiches and was more than happy to mix me up a bon-voyage bloody mary. Even in a paper cup, here was something that finally felt like a familiar part of airport travel. Seated at an isolated table with the visages of Jimi Hendrix, Jim Morrison and Paul McCartney looking down, I munched my gold-foil-wrapped breakfast sandwich and enjoyed my drink socially distanced in the airport's safe-sip zone. The five or six other people there represented the first "crowd" I'd encountered.

With time left to kill I set off to explore the concourse. But with the greatly reduced number of flights, what I mostly found was a wasteland of empty seats. That being said, you have to give Southwest Airlines credit for their irreverent sense of humor. Glowing signs amid the empty seats proclaimed: Stretch out, relax. Welcome to the great wide open. Zero people. 100% armrest space.

As it turned out, there were actually about 100 people making the flight to Oakland. As a little extra protection I had purchased Southwest's "Early Bird" option, which automatically puts you in the first boarding group. (There are no reserved seats on Southwest).

What shocked me was that when everyone in Group A cued up people were asking, "What number are you?" "Thirty-five." "Oh, I'm right behind you." Any semblance of social distancing went out the window. Forget 6 feet. We were barely 6 inches apart! We stood that way while the pre-boards were escorted down the ramp.

I was very happy when I was finally able to take my window seat. Then a woman took the aisle seat.

"This is the first time I've flown in over a year," I offered as a bit of conversation.

"Oh, I've been traveling all the time," she said. "The whole pandemic is way out of proportion. They're not telling us the real truth. People die from viruses every year. My kids both got it. It's nothing."

I considered entering into an argument about COVID protocols versus personal freedom, fact versus conspiracy, science versus politics. Instead, I slowly pivoted closer and closer to the window. When the woman began to cough I slipped on the second mask I'd brought.

"Oh, don't worry," she said, noticing my less-than-subtle body language. "I cough all the time."

After what seemed like an eternity the plane leveled off and I pushed the flight attendant button. By this point the woman's mask had slipped beneath her nose.

"And then there's the whole global-warming thing," she observed.

By this point the flight attendant had arrived and I said I needed to find another seat.

Was I overreacting? Is it possible she was putting me on the whole time? I don't know. But after a year of paranoia, getting out of that seat felt like pure survival instinct.

The Oakland terminal was a good deal more busy with people coming and going. Thankfully my checked bag arrived quickly. I grabbed it and made for the exit. After I waited for a few minutes at the curb my sister and brother-in-law drove up. I loaded my bag in the trunk, shed my mask(s) and enjoyed the first family hugs in more than a year. I had arrived.

Before you travel, check with your airline to see what COVID-19 protocols are still being practiced and plan accordingly. 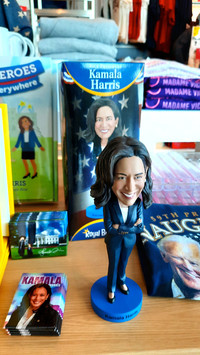 A bobble-head doll of Vice President Kamala Harris was recently among the few gifts for sale at the usually busy Los Angeles International Airport. Photo courtesy of Jim Farber. 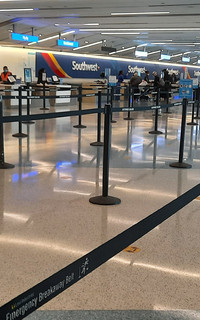 The ticket counter at Southwest Airlines in a terminal at Los Angeles International Airport was recently eerily quiet. Photo courtesy of Jim Farber.