Known for iconic structures such as the Golden Gate Bridge and colorful neighborhoods like Fisherman's Wharf, San Francisco is surrounded by natural beauty, making it one of America's best cities in which to get out and enjoy a hiker's paradise. Memorable times and beautiful scenes await on local trails that can enhance a visit to the City by the Bay.

One of the most nature-rich areas of San Francisco is the Marina District, where you can find relatively affordable motels and be close to Marin County, where 50 percent of the land is preserved park space. Marin is home to Muir Woods, where you can crank your head up to see some of the world's tallest redwood trees. And check out the wild Marin Headlands, just across the Golden Gate Bridge.

On weekends I often take San Francisco's Muni Bus 76X to the Marin Headlands' Fort Cronkite parking lot at Rodeo Lagoon. Picnic benches, restrooms and the Marine Mammal Center are open daily 10 a.m. to 4 p.m. Hundreds of rescued sick and injured California seals and sea lions are rehabilitated here. Take a docent-led tour before or after your hike. Be sure to bring water and food, and print a map of the area before you go. Keep your eyes open on the trails, for you never know what Mother Nature might present that day.

A favorite trail in the Marin Headlands is the Miwok loop — about 5 miles with 1,100-foot elevation gain and views that include the San Francisco skyline, Golden Gate Bridge, and miles of undeveloped protected land and wildlife, particularly seabirds along the coast such as the elegant brown pelican that is known for diving into coastal waters for schools of fish.

One Sunday I started out on the Miwok loop trail (named for the indigenous people) from my usual spot at Rodeo Lagoon. This loop includes part of the Coastal Trail and small offshoot trails with spectacular views. Walking north, I veered to the left around the first Coastal Trail sign, (about an eighth of a mile up from Rodeo Lagoon), and the trail led to a stunning coastal view of bird rocks dotting the landscape. Waves crashed against jagged rocks below high cliffs and above were blue skies, cumulous clouds and brown pelicans flying north in V formation.

That windy day I watched a fisherman raise his arm and extend a line over the cliff's edge. His line moved with the wind, and his body swayed forward. I feared he'd tumble over the cliff as his gaze followed a target. My gaze followed his shoes that gripped the rocky edge. His eyes fixed beyond the cliff as pelicans circled above. The fisherman yanked his line with difficulty. He'd caught something!

More pelicans circled by the dozens. A group of hikers watched, and a man shouted, "The fisherman caught a pelican's wing and the injured bird is floating!" People peered over the cliff's edge, where a pelican surrendered to the choppy waters, unable to fly. It was an impossible area for a rescue. What appeared to be hundreds, perhaps thousands, of pelicans flying north stopped to circle their injured mate then flew off, allowing new pelicans to circle.

Adjacent to San Francisco's Marina District is the Presidio of San Francisco, part of the National Park Service, which offers 300 acres, 24 miles of trails and eight scenic overlooks. The California Coastal Trail starts at the 25th Avenue Gate near Baker Beach. It is a 2.4-mile relatively easy walk, offering Golden Gate Bridge views along rocky bluffs with windswept Monterey Cypress trees and singing native birds. Get a map at the Presidio Visitor Center and discover hidden gems such as China Beach and Andy Goldsworthy's natural art. He uses nature as his canvas, creating works such as "Wood Line," a graceful sculpture of eucalyptus branches "drawn" on the forest floor parallel to the Presidio's oldest path, Lover's Lane.

The Presidio lies within the Pacific flyway, and more than 200 species of birds have been identified here. Allen's hummingbirds are common in spring and summer. Chestnut-backed chickadees, scrub jays and house finches are common year-round. Look up and you'll often see red-shouldered hawks soaring above the Pacific.

Lands End Trail is 3.4 miles and starts near the famed Sutro Baths near the Cliff House, where you can walk down steep steps and see where San Franciscans once swam. At one point the baths accommodated 10,000 bathers. A visitors center offers maps and memorabilia. Then take the dirt trail, winding above ragged bluffs as you pass wildflowers, trees, birds and more superb bridge views. This is another spot where you need to be sure to stay on the trail and away from the edge. 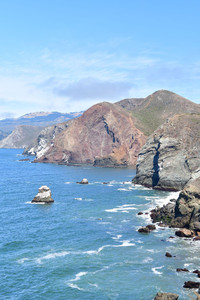