From Accident to Embarrass, No Name and Hell -- Unusual Town Names

Vacationers seeking a double thrill enjoy an exciting whitewater rafting trip on the Colorado River followed by a zip-line ride over the canyon through which the rapids race. Eating rather than excitement is the goal of folks in North Carolina, while visitors to a tiny community in Minnesota have an immersion in Finnish culture.

These travel experiences sound interesting, and where they are located adds even more to their appeal. They're among countless towns and communities throughout the United States whose names are delightful and droll, sometimes comical and curious.

Consider the Colorado destination. When Interstate 70 was being laid out there, a future exit was located near an unnamed village. Highway planners identified the off-ramp as "No Name" and the term stuck. Despite that affront, No Name is not a no-show when it comes to attractions. Nearby parks offer hiking, biking, rock-climbing and other outdoor pursuits as well as lovely waterfalls and breathtaking views.

The tale of the North Carolina community began when a settler thought the mist rising from a creek resembled meat-cooking pits he had seen. He called the stream Barbeque, and that name was adopted for the community that grew nearby. Visitors today can enjoy North Carolina-style barbeque in its chopped, sliced or pulled manifestations.

A small community in Minnesota holds the title of coldest place in the continental United States. When French animal trappers who came to the area had trouble navigating a river, they called it Embarras. Later immigrants from Finland arrived in the town of Embarrass (an S had been added) to work at mines and logging camps. They built houses, barns and saunas using traditional methods and materials, so today visitors can enjoy an introduction to a slice of Finnish culture.

A very different lifestyle greets visitors to a community in Pennsylvania whose name has a double meaning. One explanation is that it was located at the intersection of two major roads. Another is that when the community was a British colony, social interaction among people — called "intercourse" at that time — was an important part of the culture. The lifestyle of the Amish who live in Intercourse today has changed little over time. Manicured farms have no electricity, horses pull plows and buggies take the place of cars.

Other communities with enticing names have their own engaging stories. A small town in New Mexico originally was called Hot Springs because of mineral-rich thermal waters that spas claimed could cure "anything that ails you." In 1949 the producers of the "Truth or Consequences" radio program sought a town willing to take on the show's name as a publicity stunt. The people of Hot Springs agreed and the rest, as they say, is history.

No one is sure how Accident, Maryland, got its name. One story is that it came about, well, by accident. After British Lord Baltimore opened western Maryland for settlement in 1774, two men set out to survey the area. When they began to chart the same tract of land "by accident," they decided to call it that.

The name of Boring, Oregon, doesn't describe what the community has to offer. Visitors find an antiques mall, pick-your-own-produce farms, and microbrewery tours and tastings, among other attractions — and they learn that a pioneer named William Boring settled in the area in 1856. Later town fathers, displaying a sense of humor, adopted the motto "The most exciting place to live."

Another idea to cash in on a town name came to an enterprising farmer in Georgia who sold pecans to people driving from the northeast to Florida. He incorporated his farm, named it Santa Claus and became its mayor. Later the land was developed as a housing community with street names like Candy Cane Road and Rudolph Way.

A very different story awaits visitors to a town in Michigan that was settled in 1838 by a man who operated a grist mill. When he ran short of cash to purchase grain he used home-distilled whiskey to pay farmers, some of whom went on a several-day bender. Asked where their husbands were, wives often replied, "He's gone to Hell again."

According to local folklore, when townspeople were seeking an official name for the community the mill owner remarked, "Call it Hell. Everyone else does." Hence a new industry was born, based on tourism. Today people are invited to "Bring your family for a little bit of Hell on Earth" where they mail postcards from the Hell Post Office and enjoy treats at the Hell ice cream store.

In addition to these humorously named hangouts there's an alphabet-long list of other alternatives, from Allgood, Alabama, to Zig Zag, Oregon. Not to mention Looneyville, Texas, and Little Heaven, Delaware, and Money, Mississippi, along with Marmaduke, Arkansas, and Ding Dong, Texas, and Disappointment, Kentucky. The choices cover the country, tempt the imagination and offer a different way to explore and experience the United States.

Not all of these small towns have websites, but here are some that do. 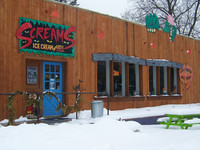 Everyone screams for ice cream in Hell, Michigan. Photo courtesy of Victor Block.