When Norbert Blei wrote his most famous book, "Meditations on a Small Lake," he was attempting to do what Annie Dillard had done in her Pulitzer Prize-winning ruminations on nature and a small body of water called "Pilgrim at Tinker Creek." Blei, who was the bard of Door County, Wisconsin, chose the more circular Little Lake. However, Blei had a problem Dillard didn't have. Tinker Creek flowed in mountains far from a coast. Blei chose a tiny lake on a thin peninsula sticking into gigantic Lake Michigan.

I offer this background because I arrived in Door County to holiday in and on Lake Michigan. True, I could have started in Chicago or Michigan, but this Wisconsin county boasts more than 300 miles of shoreline, one of the longest of any U.S. county.

On my first evening in Door County I boarded a sightseeing boat out of Sister Bay. I arrived early at the Norra Dorr, handsomely decked out in blues and whites, a sharp contrast to the steel gray of the threatening sky. When all of the passengers were on board the pilot announced an itinerary change so that the boat could get out and back ahead of the incoming storm. As I looked out on Green Bay, the water appeared unappreciative of the coming tumult with only an increasing chop.

The boat steamed ahead at a brisker pace than the usual sightseeing barque, so we quickly rounded the headland and turned southwest. I knew this stretch of coast well as my wife and I had stayed at a lodge here two years before and walked the forest trail into town. I climbed to the sightseeing deck. With the wind and now big droplets of rain falling, the deck was all but abandoned except for two young couples in the throes of romance.

Ironically, when I was here with my wife, we intended to do this very boat ride, but unseen storms somewhere over Lake Michigan produced such oceanlike turmoil, whipping the bay with high waves, that no sailing crafts were allowed out of the marina. Now the storm was upon us and the water became choppy as we turned and headed back.

The next morning I was scheduled to kayak to Cave Point, where the wind and Lake Michigan waters have eroded limestone cliffs to create caverns, but the overnight storm intensified and my excursion was called off. That was OK because I had made this kayak journey in the past and I still remember it as one of the best short kayak trips I had ever done in the United States.

Instead I opted for Whitefish Dunes State Park to stroll along the beach as the winds were diminishing and heavy rains declined to a drizzle. The park boasts numerous hiking trails, but I just wanted to walk along the coastline and I got a break because the rain ebbed, although Lake Michigan was still tossing up whitecaps.

Sticking to my aquatic theme, when the sunshine broke through in the afternoon, I made my way to Cana Island Lighthouse, set on an islet about 100 yards across a shallow channel. To get from mainland to isle a John Deere tractor pulls an old hay wagon, now reimagined as a conveyance. This was interesting but not exciting, so on the return I opted to walk. I took my shoes off and stepped into the channel with rolling waves whipping water to my thighs. The biggest problem was the rocky floor, which made the walk substantially more painful than I figured, and I remember thinking at midway this probably wasn't the smartest move on my part.

The next day I met up with a group of runners for a jog through Peninsula State Park. It was a real joy to run under the thick canopy of a coastal forest. Afterward we stopped at a campground because the women in the group wanted to shower. Two of the other runners and I decided to walk to the end of a metal pier and jump into the cold waters of Lake Michigan. Unfortunately for me, while climbing back onto the pier I scraped my arm against a rusty piece of metal, causing a gash and a quick trip to an infirmary for a tetanus shot. Meanwhile, I missed my second scheduled kayak journey, this one to Horseshoe Island. The storms returned and my parasailing trip got washed out as well. So much for my Lake Michigan vacation, but I already know how magical this place can be. As Norbert Blei wrote: "We will return again. Into water." 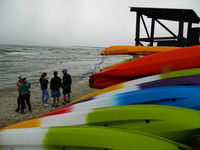 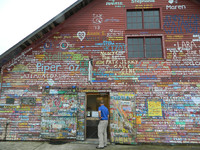 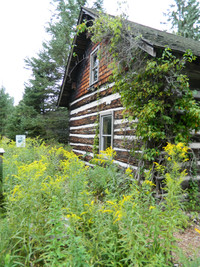