Virginia's Blue Ridge Mountains glimmered indigo as bar-goers sipped "likker" in the "Moonshine Capital of the World," diners slurped signature peanut soup in a grand old hotel and the fiddlin' town of Floyd erupted in a flatfoot dancing jamboree.

It wasn't bootleg booze but homey charm, spirited history and splendid scenery that dizzied me during a visit to Virginia's mountain-rimmed Roanoke Valley. Cloaked in Americana, this area straddles part of the picturesque 469-mile-long Blue Ridge Parkway, a winding road enveloped by forested rolling hills cast in a purplish-blue haze (from trees giving off a natural compound), boasting rubber-necking vistas and dubbed "America's Favorite Drive."

First, brake for buttermilk biscuits. They're a warm, flaky phenom at the Roanoker Restaurant, a nostalgic landmark that has whipped up the same biscuit recipe for more than 70 years. Biscuit bedlam spikes on Christmas Eve, when 3,500 takeout biscuits fly out the door. The owner, a lovely woman named "Butch" Craft, showed me a culinary secret in the kitchen: Dough is still mixed in the same 50-year-old stainless-steel bowl.

Funnily, the town of Roanoke was once named Big Lick — not for finger-licking biscuits but because in the 1850s and 1860s elk and buffalo gathered at the large salt deposits to lick the ground. I learned this tidbit from the mayor while loitering at the foot of — ta-dah! — the world's largest man-made illuminated star. The 100-foot-tall,10,000-pound Roanoke Star — it's like Virginia's Eiffel Tower — was erected on a panoramic peak by merchants in 1949 as a Christmas decoration to kick-start shopping.

"After Christmas, they couldn't find a big enough closet to stuff it in," joked Mayor David Bowers. "Since then, it's become a symbol of our city."

About 20 miles from Roanoke, I ambled through quaint 1772-founded Fincastle (population 350), where a Colonial blacksmith shop, 1897 jail, antebellum churches and frontier homesteads dot narrow lanes. Thomas Jefferson designed the village's second courthouse, since rebuilt after a fire. Peek into the past at the artifact-adorned Botetourt County Historical Museum housed in a former 18th-century law office. Among other curiosities, a period-dressed female mannequin sits in a wooden witness chair from Fincastle's first log courthouse. A sign notes that she was found guilty of "Loud of Mouth" and punished by being tied in a chair and dunked in a pond three times.

Ladies, spout off all you want at Flying Mouse Brewery, tucked in a hollow of the Blue Ridge Mountains and ruled by a steam-punk super-hero rodent mascot named Bartleby Hopsworth, whose image appears everywhere. I squeaked while enjoying the craft Flying Mouse malty ale at the Mousetrap tasting bar. Since it's located a half-mile from the Appalachian Trail, weary hikers often pop in for a cold draft or leave with the brewery's carry-away filled beer pouches.

"This is not a couch potato brewery," owner-brewmaster Frank Moeller grinned. To keep outdoor adventurers fit, Moeller holds 1-kilometer jogs through the brewery with participants quaffing a flight of three Bartleby mouse-labeled beers over three laps.

If you really want a workout, kick up your heels in the offbeat rural enclave of Floyd, located on the lively 300-mile Crooked Road, Virginia's Heritage Music Trail. Try Appalachian flatfoot dancing during a raucous Friday Nite Jamboree at the Floyd Country Store, jumping with banjos, guitars, harmonicas, fiddles and washboards playing bluegrass and mountain music. Foot-stompin' festivities spill into the streets of this one-stoplight town.

As Floyd's official tourism website poetically explains: "Floyd is as much a state of mind as it is a destination." In this free-spirited haven, you'll find a honeybee sanctuary, shops selling hemp apparel and local kombucha, yurts to overnight in and the quirky Republic of Floyd emporium peddling the "Floyd Dysfunctional Family Cookbook."

After Floyd, stop at photogenic Mabry Mill, a century-old water-powered gristmill that grinds corn and may be the most camera-ready locale on the Blue Ridge Parkway. Tourists can get a glimpse of tough pioneer life in this pastoral setting that features a restored 1870s cabin, sawmill, blacksmith's shop and moonshine whiskey still.

Speaking of moonshine, the Roanoke region includes Franklin County, known during Prohibition for producing the highest volume of illegal whiskey in the United States. Today it hypes its heritage by continuing the title: Moonshine Capital of the World. Check out Bootleggers Cafe inside a 1929 Coca-Cola bottling building, where imbibers slug (legal) Lightning Apple Pie Moonshine and eat Rum Runner Fries (spiced rum sauce and sweet potato fries) while reminiscing about Willie Carter Sharpe, aka "Queen of the Rum Runners."

Back in Roanoke, fans of the DIY Network series "Salvage Dawgs" will recognize two other black Labs — Sally the Salvage Dog and Molly May — greeting customers at Black Dog Salvage, a 40,000-square-feet warehouse packed with architectural remnants and vintage finds. The human "dawgs" salvage crumbling farmhouses, hospitals, cotton mills and other structures and repurpose items they collect. Need an embalming table?

"We add value to a cast-off society. Otherwise, this stuff would go to the dump," said co-owner and dawg Mike Whiteside, standing near a wine bar made with an old gas station light post.

Roanoke is a former railroad town, and later at its Virginia Museum of Transportation train buffs drooled over a bevy of shiny locomotives, including an apparently sultry choo-choo.

"This girlfriend could raise the dust. She could shake her booty and she didn't care who was looking," our museum guide crowed. The hot babe was "the 1218," once the most powerful steam locomotive in the world.

After this excitement, I retired to my room in the Florentine marble-floored, 1882-founded Tudor-motif Hotel Roanoke, where Amelia Earhart, Joe DiMaggio and President Richard Nixon once bunked. The hotel, nicknamed the Grand Old Lady, has grown from 34 to 331 guest rooms but still dishes its famous Southern-style peanut soup created in 1940 by the then-hotel chef and served with signature cornmeal-based spoonbread. Each week diners down 140 gallons of the creamy concoction.

Said Stephen DeMarco, executive chef: "People eat the soup for breakfast. They order it from room service at midnight." Even he looked flummoxed.

Sounds nutty, but maybe it's a hangover cure for that Virginia moonshine. 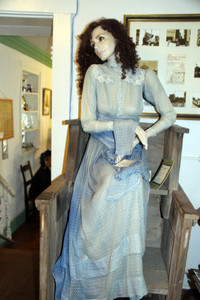 . The museum in historic Fincastle, Virginia, displays its pioneer past. This unlucky woman was convicted of "Loud of Mouth." Photo courtesy of Norma Meyer.

The town of Floyd, Virginia, located in the Blue Ridge Mountains, is a haven of mountain music, natural beauty and free-spirited souls. Photo courtesy of Norma Meyer.