Cuba: A Charismatic Country in the Crux of Change

Waves crash sporadically with a thundering sound against the five-mile seawall, reaching foamy heights and spilling over onto the Malecon — Havana's popular promenade. Couples and habaneros (locals) amble along, while men casually cast their fishing lines and families relax upon the wall engaged in conversation as they peer out into the distance. Others joyously listen to Afro-Cuban beats pulsating past the lull of the water. These vibrant rhythms are the overriding sounds that permeate most of Havana's neighborhoods, restaurants, street corners and historic squares.

As I continue along the waterside, I experience an ebb and flow of time that shifts back and forth from past to present. The cars and taxis passing me on the right are brightly colored 1950 Buicks and Chevys reminiscent of my childhood days in New York. With the absence of cell phones and iPads in the hands of the youth, life could be just as it was some 50 or 60 years ago, except for the array of architecture surrounding me that ranges from Spanish colonial and baroque to neo-classical, art nouveau and ultra-modern.

Thanks to President Obama's opening up doors in 2008 for U.S. Cuban residents to visit their families and for Americans like me in conjunction with humanitarian and educational organizations, I was able to have this unique travel opportunity. I didn't realize that during my 10-day sojourn with U.S. Global Exchange I would develop an increased knowledge and appreciation for the Cuban people and their sense of sustainability and community.

One of the major attractions for me was that Cuba is considered the salsa capital of the world, and dance happens to be my passion. However, the human spirit and vibrant arts scene soon became the more prominent lure.

Many mornings began with an informative lecture by experts who ranged from a noted filmmaker to an urban planner. This was followed by a visit to a museum or local arts group with lunch at a popular establishment. The tour also afforded me the opportunity to have several hours free to explore and observe the sights, sounds and colors around me.

It was easier and more enjoyable to walk when I wasn't on the tour bus because of the lack of public transportation throughout the different districts of Havana. I noticed only two major bus lines. A taxi or Coco taxi (a three-wheeled yellow bubble powered by the driver on a Moped) from the residential districts to Old Havana costs 6 to 10 Cuban dollars. The exchange rate was approximately 90 U.S. cents to the Cuban CUC or dollar.

Near our hotel in the Vedado District, just below the more manicured Miramar, sits Havana's residential area. Off the Avenida de Paseo are mansions, with many behind the main boulevard sadly dilapidated and decaying. I could envision what grandeur and aristocracy epitomized this area in its heyday during the 1930s and '40s. Many of these buildings have been converted into particulares where tourists can stay overnight as well as privately owned restaurants or paladares. Decameron, once the house of a prominent doctor, was one such restaurant. The generous fresh fish entree served with a rice pilaf and squash was a great deal for around $10.

I was taken farther back in time when I entered Havana's grand, well-preserved Hotel National (circa 1930) off La Rampa on the edge of Vedado toward the Central District. A visit to the Hall of Fame featured a massive mural of international stars, dignitaries and notorious characters — the Cuban-born actress Rita Hayworth, Frank Sinatra, Ava Gardner and mobster Meyer Lansky.

Finally I arrived at the Old Town (La Habana Vieja), called a corner of Europe in the Caribbean. Our tour group had visited the day before to familiarize ourselves with this tourist area. Now I was surrounded by an array of artists, musicians and never-ending outdoor cafes along with a slew of shops selling local crafts, books and jewelry. Restoration signs showing the area before and after renovation were apparent throughout the main squares.

A UNESCO World Heritage Site, Old Havana is the pulse and heart of the city. Life flourishes here day and night with appearances by colorful costumed locals and entertainers. It wasn't considered unusual to get up while eating in a restaurant or cafe and start dancing to the musicians playing for diners. At Havana's oldest hotel, Hotel Inglaterra built in 1875, I savored salsa dancing and cafe con leche on several occasions.

At the main square, Plaza de la Catedral, sits the baroque Catedral de San Cristobal where Christopher Columbus was once buried. Our group lunched one day at Ernest Hemingway's hangout, the famed bar and restaurant La Bodeguita del Medio — a fun place of photos and signatures of American and European celebrities covering every inch of wall space.

Not far away stands Plaza de Armas, the oldest square, which dates back to the Spanish explorers of the 1500s. Here there's a distinctly bohemian feel, with artists and book stalls shaded by towering palms.

Cuba sets itself apart with its vibrant communities of muralists and artists in and around the old town and in Havana's outskirts. We visited several, such as Callejon de Hamel and Muraleando, which artfully beautify the distressed neighborhoods. Most memorable was our day trip to Callejon de Tradiciones Community Project in the city of Matanzas, lying eastward to Varadero, the site of Cuba's pristine beaches. The creatively painted murals have become a backdrop for a young Afro-Cuban dance troupe, who offered us local fruit to take back after their engaging performance.

Today Cuba, since the throes of the revolution in 1959 when Fidel Castro created a socialist state, is a country of approximately 11 million people (2.2 million in Havana alone) and of almost constant internal and external struggles and a movement toward change. Much has changed for Brooklyn, N.Y., resident Dr. Juan Emilio Carrillo, who returned to Cuba after living in the United States for more than 40 years to share his roots with his son and wife. He had last visited Havana in 1987, and now he was here with our tour group. He said the city has undergone much advancement in restoration, development of businesses and the general sense of close community among the habaneros.

"I am witnessing more business activity and less overt signs of poverty on the streets in this country than before — especially since 1990, when the Soviet Union dropped out of the picture here," he said. "Even the farmer's lifestyle has exhibited improvement."

This was further evident in our group's side trip on our final day to Alamar's Urban Gardens, a sustainable organic farm developed in 1997 from an empty lot. We donned plastic bags over our feet as we carefully stepped on the softened earth amid greenery on 25 acres of fertile land. Presently 400 tons of produce are farmed here by 162 workers each year. Though the average Cuban income is $20 per month, the farmers outside the city earn around $400 per month.

At our final morning lecture, respected Cuban architect and planner Miguel Coyula stated, "Of course we need a new kind of housing system to be initiated with approximately three houses collapsing daily. We need to move forward with a model that is economically feasible and ecological friendly."

I realized on this day how many diverse perspectives of Cuba I had experienced — from the eyes of the artist and architect to the farmer. As the doors of Cuba continue to open and its economy improves, hopefully more of this vibrancy, creative expression and human spirit will be further revealed for visitors from around the world to experience firsthand.

Global Exchange's Reality Tours for 10 days to Cuba organizes the visas and charter plane from Miami to Havana: www.globalexchange.org, www.realitytours.org.

A visit to Ernest Hemingway's home in San Francisco de Paula, nine miles from Havana, includes the seaside town of Cojimar, where Hemingway docked his boat and socialized with locales. The cost is $40: www.hemingwaycuba.com. 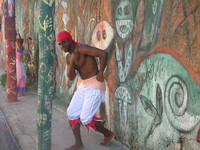 A dancer performs in front of a mural at the Callejon de Tradiciones Community Project in the city of Matanzas near Havana, Cuba. Photo courtesy of Beverly Mann. 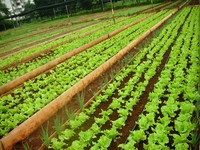