What do Saltaire and artist David Hockney have in common? Their roots are firmly planted in Bradford, England, deep inside the hilly northern countryside of West Yorkshire. Sir Titus Salt, 19th Century leader of the wool industry, political figure and philanthropist, could not have dreamed that his creation, Saltaire, a Victorian model village-turned art and cultural destination would also become a UNESCO World Heritage Site (awarded in 2001) and home to the world's largest permanent collection of works by one of the most celebrated living artists and Britain's most influential of all time, born in Bradford on July 9, 1937.

Saltaire, now a 21st Century model of regeneration, is as striking and inspiring today as Salt had intended when in the mid-1800s he constructed the most modern textile mill in Europe and an adjacent village to house — rent-free — his thousands of workers and their families. Its name is a combination of Salt and the River Aire, the source that powered the mill. The buildings of the former industrial village have remained remarkably intact, and today's Saltaire is a proud reminder of the region's place in history — and a desirable place to live.

Saltaire of yore was designed with the highest standards so that workers could have homes "with amenities essential for a healthy and civilized life" — schools for children, adult education, housing for aging workers, a church, a hospital, a library, a gymnasium and landscaped parks. A humble man of great wealth and strong religious faith, Salt was a visionary ahead of his time who lived modestly, motivated by his belief that people of wealth had the social responsibility to share their success with others. His return was healthy, productive and loyal workers.

Salt had catapulted Bradford to the wool capital of the world with his innovations and technological experimentation in wool production — cashmere, camel hair, worsted wool, pioneering the use of mohair from the Turkish angora goat, and his greatest achievement, uncovering a way to make fine alpaca wool — earning knighthoods from England and France.

So discovering Saltaire during a visit to Yorkshire's famous countryside was nothing short of landing on a Holy Grail of inspiration.

Entering through the sliding glass doors at Salts Mill, once known as the Palace of Industry, I imagined the hum of machinery from the glory days of the mill — now replaced with the quiet footsteps of visitors big and small walking the stone floors of 1853 Gallery, Salts Mills' reincarnation (named after the year Salts Mill opened — on Sept. 20, 1853, Salts' 50th birthday).

The enormous rectangular Venetian building with vaulted ceilings and rows of arched windows and pillars has transformed into a spacious art venue flooded with warm natural sunlight. With so much under one roof, this casual, airy space invites guests to linger in its galleries, cafes and unique independent shops offering all things art — books, posters and supplies as well as locally crafted heritage furniture pieces and antiques.

A mural series by 20th Century British landscape and portrait painter Henry Marvell Carr marvels (pun intended) visitors with his whimsical illustrations of the wool-making process. Another gallery chronicles the history of Saltaire.

David Hockney, though, is the heart and soul of 1853 Gallery, among the few galleries dedicated to a living artist. And it wasn't until I came to Saltire that I realized the extraordinary range of the painter/draftsman/printmaker/photographer/theatrical stage designer. This might well be the only place to fully appreciate the breadth of the 78-year-old artist's works (600 pieces) housed in a single location — from traditional and pop art paintings and prints to Polaroid photo collages he called "joiners," landscapes and digital art. And who doesn't remember Hockney's famous paintings of swimming pools of the 1960s, when he moved to Los Angeles to capture the unique light on America's West Coast?

Hockney's artistic gift was recognized early in his life when he was awarded a scholarship to the prestigious Bradford Grammar School and already began receiving accolades while a student at Bradford College of Art and the Royal College of Art in London.

"Hockney is a technically minded artist and one of many layers," Sue Roe, manager of Salts Mill Gallery, enthusiastically explained. "He is never satisfied with one style of art and always looks to embrace the next new medium. He was also a massive, massive fan of Picasso."

"No one had ever taken a modern slant on printmaking," Roe continued, "... then in the early '70s Hockney went to Paris."

It was around the time Picasso died — but before he could put to use the revolutionary method of printmaking he had devised using multiple colors. Hockney was the first person to use Picasso's techniques and created prints in honor of the great master.

During the mid-1970s Hockney stopped painting for two years to research photography and his theory that artists during the Renaissance (1300-1700) used lenses even though photography had not yet been invented. And by the mid-1980s he was embracing technology wholeheartedly as he began using photocopiers, laser fax machines and laser printers to produce prints.

Then there's Hockney's fascination with perspective, including reverse perspective where he challenges the Western idea of the vanishing point, a method he used in the theater, which he applied to his paintings whereby objects farther away become larger - to pull viewers into his artwork rather than feeling they are outside. Examples of this can be seen at the gallery, including a stunning real-life creation of Hockney's painting, "The Chair."

But Saltaire may not exist today had it not been for the vision of Jonathan Silver (1949-1997). An art lover, antiques dealer and successful entrepreneur, he, too, was a Bradford Grammar alumnus (he ditched lunch hours at school to hang out at nearby auction houses). Although 12 years behind Hockney, it was this connection that would shape Bradford's future as an arts and cultural center.

Fast forward to 1987, many decades following the decline of Britain's textile industry, and an abandoned Salts Mill. With numerous successful business ventures to his credit, Silver took two years off to travel with his family. Returning to Bradford inspired to reinvigorate the region, he (37 years young) bought the mill, a vision that included creating a gallery devoted to Hockney.

As I stood before Hockney's "Arrival of Spring" series, which he had completed during an eight-year return to Yorkshire, I found it hard to pull away from the multiple works that seemed to be the same. They were, but they weren't.

The colorful yet peaceful individual drawings of the same country road in the Wolds captured the seasons' moods as winter changed to spring. Each was done in 2011, on a specific day between January and May. At that moment I realized that the artist had poignantly come full circle, returning to his homeland and, with the Brushes app on his iPad, sketched en plein air the seaside landscapes of his youth.

The notion of retiring does not appear to be on Hockney's horizon. Back in Los Angeles from Yorkshire, the master is busy, once again, on his next works.

The "People and Process" exhibit tells the story of Salts Mill in Yorkshire, England, at the time the most modern textile mill in Europe. Photo courtesy of Athena Lucero. 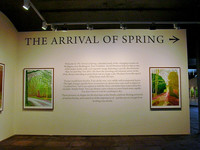