When you think of the great promoters of the West, the films of John Ford and the photographs of Ansel Adams probably come to mind. But in fact, the man who probably had the greatest influence, who introduced thousands of visitors to the landscapes and native peoples, was an enterprising Englishman named Fred Harvey.

Harvey arrived in America in 1852 at the age of 17. But it was in 1876 that he laid the bedrock of what would become a tourism empire when he entered into a contract with the Atchison, Topeka and Santa Fe Railway. This was at a time when train travel was an iffy experience, when you were as likely to die from a derailment or a bridge collapse as you were from eating the food.

Harvey agreed to open a chain of restaurants and hotels (at its peak there were 500) that would offer consistently good food (delivered daily by rail and grown locally on vast Harvey farms) with clean, hospitable lodging, all overseen by a cadre of young women who were demurely clad (like nuns) in black and white — the Harvey Girls.

From the moment you enter La Fonda Hotel on the Plaza in Santa Fe, New Mexico, with its gently curving pueblolike exterior, great wooden beams that overhang the lobby and array of classic posters and contemporary art that adorn its walls, you become part of the Fred Harvey story. Designed by Isaac Hamilton Rapp, the father of Santa Fe style, the hotel was purchased in 1925 by the Santa Fe Railway and leased to Harvey to operate. But in fact, the site had been home to a succession of inns since 1609.

You might also notice a large carved wooden sign that says "Indian Detours." These were the scenic excursions that departed from La Fonda and were designed to introduce visitors to the Native American pueblos, their culture and their craft skills as weavers, potters, wood carvers and silversmiths. If you possess a squash-blossom necklace, a kachina doll, a turquoise bracelet or a Navajo rug, you can probably thank Fred Harvey. Yes, it may have represented a form of cultural exploitation, but it introduced people to the Indian culture of the Southwest while offering Native Americans a chance to earn much-needed money. It also began a tradition that to this day remains the artistic bedrock of Santa Fe's economy.

Today most people fly or drive to Santa Fe, though you can take a train, either Amtrak to the not-too-distant town of Lamy or the newer Rail Runner service direct from Albuquerque. However you arrive, a visit to — or ideally a few nights' stay at — La Fonda will greatly enhance your Santa Fe experience. The luxurious and exceedingly comfortable rooms have recently been freshly renovated and feature furniture and artwork by local artisans.

The artistic theme of the rooms also reflects the influence of architect and interior designer Mary Colter, who oversaw the design for Harvey's destination hotels from 1905 to1946, including El Tovar Hotel and Hopi House at the Grand Canyon and her final Harvey house, La Posada in Winslow, Arizona.

Dining at La Fonda includes La Plazuela off the lobby. Its courtyard setting is especially nice for breakfast and lunch, while the rooftop Bell Tower Bar offers the best place in town to watch the sunset as you sip a margarita.

For dinner? You can't imagine how many options you have, from the classic cuisine of the Compound (on Canyon Road) to the warm and cozy atmosphere of the Pink Adobe. For the famous Santa Fe cuisine head to Geronimo, Coyote Cafe, Santacafe or Restaurant Martin, featuring creations by Chef Martin Rios and his wife, Jennifer.

They are all within walking distance of La Fonda along with the New Mexico History Museum (which offers an excellent Fred Harvey display), the Palace of the Governors and the Georgia O'Keeffe Museum. A bit of a drive will take you to Museum Hill and the four world-class museums there. 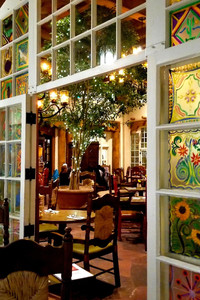 This colorful dining room is among the many options for meals at La Fonda Hotel in Santa Fe, New Mexico. Photo courtesy of Jim Farber.

La Fonda Hotel in Santa Fe, New Mexico, has been the site of lodgings since 1609. Photo courtesy of Jim Farber.