We visit certain cities for the tourist attractions, the vistas, the history or perhaps the nightlife. I often choose a destination based on who was there before me, which is the reason I wanted to come to Lexington, Kentucky, home to the University of Kentucky.

What made Lexington interesting to me was that two iconoclastic — sometimes caustic but always brilliant — women came of age in that Southern city about 100 years apart. The two ladies were Mary Todd Lincoln, wife of President Abraham Lincoln, and Elizabeth Hardwick, a doyen of New York literary life for five decades.

Lincoln's history in Lexington is easy to trace as her childhood home has been restored and is open to visitors. The local history of the more contemporary Hardwick has been entirely lost, so I'll start with her.

The oddity of Hardwick, who has been called one of the most authoritative voices in contemporary American letters, is that she became the ideal representative of the New York Jewish intellectual, although she was neither Jewish nor a native New Yorker. She was a novelist, essayist and literary critic, wrote for numerous magazines and co-founded the New York Review of Books. If that wasn't enough, she married the poet Robert Lowell.

Not bad for a Lexington, Kentucky, gal.

Hardwick was born in 1916. At that time her family lived at 264 Rand St., off North Limestone Street. It is now a vacant lot. However, it was near Duncan Park, which is still a city park. According to Tom Eblan, a journalist and local historian, the park was once the estate of newspaper publisher Henry Duncan, but before that in the 1840s was the namesake of Cassius Marcellus Clay, an abolitionist newspaperman, ambassador to Russia during the Civil War and namesake of the boxer who eventually became Muhammad Ali.

Hardwick graduated from Henry Clay High School. There is still a school by that name in Lexington, but it has no physical resemblance to the building Hardwick attended. After high school she attended the University of Kentucky, where she flirted with Communism. The university has spread across the city, but there are still some structures from Hardwick's time there. In an interview she did in 2007 she said she went there because it was inexpensive and she could live at home.

Although Lincoln lived in Lexington 100 years earlier (born in 1818), it's much easier to discover her life before she became the first lady of the country.

The Todd house was constructed in the early 1800s as a hotel, but Mary's father bought the building to be a family residence. He had 16 children with two wives, so the idea of a big home that was once a hotel might have appealed to him. After the Todds moved away in the late 1800s the building was turned into a bordello. By the mid-20th century it was dilapidated and being used to store lumber. Finally, in 1976 it was restored as the Mary Todd Lincoln house.

Despite all of the odd uses since her time in Lexington, the house is in surprisingly sturdy shape. Much of the flooring is original, and so are the stairs and banister. That's important. Mary Todd married Abraham Lincoln in 1842 after moving to Springfield, Illinois. However, the young couple came back to Lexington on several occasions to stay with her family. So that banister that you will be holding to walk to the second floor is the same one Abraham Lincoln used. I'm not saying that it is a talisman, but if you concentrate you can feel a certain vibe as you rub your hand on the shiny wood surface.

Besides the originality of the building, the curators of the house were able to bring back to Lexington many items that belonged to the Todd family along with personal things Mary gathered as first lady and widow, including pieces of china from the Lincoln White House.

The story often told about Mary Todd, who was an educated and cultured woman (she could speak fluent French), was that she had such a vibrant interest in politics that her father let her sit with the men to discuss the issues of the day. Knowing she could not be president (women couldn't even vote at the time), she would often say she was going to marry a president.

The Great Debate rivals Stephen Douglas and Abraham Lincoln both wooed Mary, and when she chose Lincoln, Douglas said to her, "If you are intent on marrying a president you should have chosen me." Mary had better instincts.

Some airlines fly directly into Lexington. The nearest bigger cities are Cincinnati and Louisville, each about an hour and a half away. 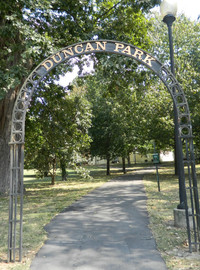