Amazonia: Not a Typical Tourist Destination

When I hike at home no one uses a machete to blaze the trail prior to walking on it. But Souza, our Amazon guide, did, creating a path in the overgrown rainforest step by step, slicing, swatting, swooping, chopping.

The hike was one of four daily activities during our eight-day adventure exploring Amazonia. Calling the Motor Yacht Tucano, an 18-passenger riverboat, home, we traveled more than 200 miles along the Rio Negro, where the only other waterborne human we saw was the rare fisherman in a dugout canoe. For our daily excursions we clambered aboard a small power launch that took us hiking, bird-watching, and village-hopping and on nighttime outings that dramatized the allure of the river not experienced in any other way.

Souza demanded quiet during our launch rides, using all of his senses to read the forest, listening for a breaking branch or a flutter through the trees, sniffing for animal odors, scanning leaves above and below for motion or the water for ripples and alerting us at every juncture of what he has discovered. His most amazing talent was his ability to identify the multitudes of birds traversing the river and forest — gray antshrikes, blue-beaked trogans and the rest, many of whose calls he could replicate precisely.

Our forest walks also were a time for observation, not conversation. On a stop to view teca ants swarming over the bark, Souza wiped his hand across it and then rubbed the ants over his forearms for an instant mosquito repellant.

At one point I looked down and saw a long brown twig draping a log. Souza saw a snake. I looked again and still saw a twig, albeit one that now had an eye. I stepped more gingerly.

We learned of the many medications the forest supplies to the natives, of vines for baskets and brooms, bark for strong rope and plants providing poison for arrows. A long assembly line of tiny leaves paraded up a hill, revealed by a closer look to be leaf-cutter ants that would carry their large, unwieldy load as much as half a mile to their colony.

Each day brought new revelations and insight into our surroundings, whether on land or water, as did our visits to several villages. Commonalities among villages were a dance hall where residents party once a month, a soccer field where youth exercise every day, a schoolroom where students of all grades learn, a clinic that caters to the medical needs of the community, a few requisite churches and a generator. But the differences are notable, too.

The contrast was particularly interesting between one village of no more than 30 families producing a single farm product and a larger "company" town where an asphalt industry thrives. In the larger village are a convenience store, small cafe and bakery. Each hut has its own outhouse, and there are several satellite dishes throughout the community.

The entire economy of the farm community revolves around manioc, a product made from grain that is the mainstay of the Amazonian diet.

There are no stores in this village, no satellite dishes and no outhouses. Residents use the woods that border their village as their toilet.

Although every day was an adventure, nothing compared with the nighttime jaunts. Our post-dinner sojourns pitched Souza and his searchlight against the dark horizon, scanning shoreline and trees in a search for something with which to entertain his eager charges.

An all-pervasive quiet loomed, yet everything, including the sounds, seemed magnified: dolphins snorting, fish jumping, caimans slithering, monkeys howling — all vying for attention.

Eventually the flashlight, seemingly darting randomly above, below and beyond the trees, alighted on a caiman in the brush, his whole snout protruding for a moment before slinking away. Another time the light reflected off a kingfisher's eyes, temporarily blinding him so that we could drift in almost close enough to touch. Then for an encore we watched a spider grab a dragonfly from a crack in a tree directly in front of us and devour it.

During the day the trills, tweets and twerps of the birds dominate the landscape; at night it's the croaks, caws and throaty outpourings of the frogs and caimans. In between our first launch at 6 a.m. and our return sometime after 9, we spent a lot of time eating. The native foods, beautifully prepared and presented, were a surprise so far from civilization.

One hot day we went fishing. I attached the chunks of beef to the end of the line thinking this was strange bait until I remembered our prey. Watching Souza rattle the water with his pole, I followed his lead to make the quarry think a wounded fish was thrashing about. Within a minute I knew I had snagged the big prize: a carnivorous 6-foot piranha.

Souza held it up to a tree and used its teeth like a scissors to cut a branch in two. The truth is that unless they're starving or you're bleeding we're really not in their food chain. Nonetheless, the fried piranhas we had that night as appetizers were scrumptious, their tiny bones crunchy and the meat flaky, proving the adage that more people eat piranhas than piranhas eat people — at least in Amazonia. 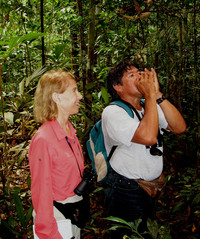 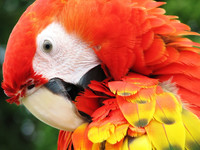