I knew that the Caribbean island of Curacao was unfamiliar to many Americans, but the flight attendant's words still caught me by surprise. Announcing our destination, she stumbled over the pronunciation and admitted, "I don't know how to say the name of that island."

Maybe the name — pronounced cure-a-sow — is a turnoff. Perhaps sun-seekers prefer other islands with more magnificent beaches. But the relatively few vacationers from the United States who visit Curacao are richly rewarded.

Begin with the island's intriguing history and rich cultural tapestry. Add some of the best diving and snorkeling anywhere. Throw in an architectural gem of a mini-city that combines tropical touches with European flair.

After checking out a number of beaches, I concluded that they deserve a better reputation. After all, how many do you need during a stay of a week or two? The 35-plus on Curacao include both broad expanses and tiny swatches perched in little coves protected by craggy cliffs.

Grote and Kleine Knip are not the only places on Curacao to have Dutch names, as the island's history and culture are closely entwined with what today is the Netherlands. Spanish explorers landed in 1499 seeking gold and other treasure. Finding none, they included Curacao on their country's list of islas inutiles ("useless islands").

The Dutch came next. Attracted by Curacao's deep-water port, they took over the island in the early 17th century, and it became a colony of the Dutch West India Co. That launched Curacao's long tradition as an important trading center. In addition to bringing wealth to the island, trade was responsible for attracting immigrants from around the world. The result is an ethnic melting pot that today includes people of more than 50 nationalities.

Some Dutch settlers built stately plantation homes, and a number of these landhuizen (land houses) now serve as restaurants, art galleries and museums. It's worth visiting at least one to recapture that period of Curacao's history.

The island's history also may be explored in other ways. The obvious starting point is Willemstad, the storybook capital that combines an intriguing past with architectural treasures. Many buildings feature a tropical adaptation of 17th-century Dutch design, adorned with fanciful gables, arcades and columns. Adding color is a virtual fruit salad of peach, raspberry and other pastel hues in which many structures are painted.

That chromatic explosion is attributed to a governor-general of the island who suffered headaches that he blamed on the glare of white paint. In 1817 he decreed that henceforth only pastel colors could be used. According to some accounts, the fact that he owned a paint factory in Holland also contributed to his decision.

The Technicolor setting of Willemstad is best seen on foot. The two main neighborhoods, Punda and Otrabanda, are linked by the Queen Emma Bridge, one of three spans named by the Dutch after monarchs.

A "floating market" nestles close to the Queen Juliana Bridge. Because Curacao has an arid climate, much fresh produce is transported from nearby Venezuela in small wooden boats. The fruit, vegetables, fish and other items are sold from stands on the dock where the vessels are moored.

The Mikve Israel-Emanuel Synagogue, which was built in 1732, is the oldest synagogue in continuous use in the Western Hemisphere. Sand on the floor is said to symbolize the wandering of Israelites in the desert during the Exodus. A small museum displays scrolls, Bibles and other religious objects.

Other little museums are gems in terms of their collections. The Curacao Museum provides an overview of the island's lifestyles and customs. The Maritime Museum traces more than 500 years of Curacao's seagoing history, with maps dating back as far as 1666.

A collection at the Sonesta Kura Hulanda Village focuses upon the predominant cultures of Curacao and their African roots. It is ironic that the museum occupies the site of a former slave merchant's home and courtyard, where men, women and children once we sold to the highest bidder.

The most moving display is a full-size replica of the hold of a ship that captures the horrors of how African slaves were transported from their homeland to their new lives. People were crowded onto wood platforms where they could hardly stand, much less sit, during the grueling ocean voyage.

It doesn't take long after leaving Willemstad to encounter a very different environment. Much of the surrounding landscape is barren and dry, the victim of sparse rainfall. In places the terrain more closely resembles a moonscape than a Caribbean island.

Christoffel Park is a green oasis in the stark landscape that is laced with pleasant hiking trails. Countless small lizards and an occasional iguana slither across the path to greet hikers.

I followed a stroll there with a refreshing dip in the sea. The beach from which I swam was pleasant and, unlike many on other Caribbean islands, virtually deserted — something good to be said for Curacao's low profile as an inviting Caribbean vacation destination.

For more information call the Curacao Tourist Board at 800-328-7222 or visit www.curacao.com.

Willemstad, the capital of Curacao, is home to a rich history and colorful architecture. Photo courtesy of Victor Block. 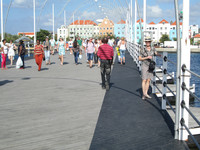 The Punda and Otrabanda neighborhoods of Willemstad, Curacao, are linked by the Queen Emma Bridge. Photo courtesy of Victor Block. 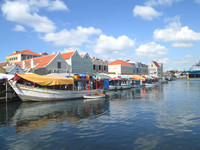