Singapore: Jewel of the East

Drums beat rhythmically as a dozen men maneuvered an undulating 30-foot-long red and yellow dragon along Orchard Road, a tree-lined boulevard known for its upscale stores and hotels. This symbol of strength, power and good luck in Chinese culture was part of a Chinese New Year celebration — just one of the surprises that awaited us in Singapore.

This has become one of my favorite places, but I'll start with the only two drawbacks I can think of. First, Singapore is consistently ranked among the most expensive cities in the world, along with Paris and Hong Kong. Second, due to its proximity to the equator, Singapore's average temperature hovers around a daily high of 88 degrees and a low of 75 degrees, with 84 percent average humidity and rain showers possible on most days. The all-time low temperature is 66.9 degrees.

Modern Singapore was founded by Sir Stamford Raffles in 1819 as a trading post for the British East India Co. The island city state (just 279 square miles) blossomed in just six decades from a place of strife and relative poverty to a global powerhouse for entertainment, education, finance, healthcare, manufacturing, technology, tourism and transportation.

During our visit to the National Museum, we were struck by the magnitude of the country's accomplishments: Singapore is consistently rated as one of the world's safest and cleanest countries; it has the world's top rated airport and airline; its students rank No. 1 in the world for science, reading and math; it is the world's second busiest container port, third-largest global foreign exchange market and third-largest oil and refining center; and it ranks as the eighth healthiest country.

Invariably we found the Singaporeans to be kind and helpful. Fortunately for us, English is their main official language, followed by Malay, Mandarin and Tamil. The country focuses on policies that ensure that people from different countries and cultures can live and work together peacefully. Every July 21 they celebrate Racial Harmony Day, a reminder to themselves of how important this element is to their success.

We opted for an unorthodox way to explore the city by staying in hotels in three different areas. Our first hotel, the Six Senses Duxton, placed us near Chinatown, the elaborate Buddha Tooth Relic Temple and across from the Maxwell Hawker Center, one of the city's best places to try tasty yet inexpensive Singaporean dishes. The boutique hotel is located in a row of carefully restored trading houses, which accounted for rooms named the Opium Room and Shophouse Room.

While much of Singapore has been rebuilt with towering modern buildings, the city now rigorously preserves the remaining historic homes and shops as heritage sites. The NUS Baba House, a carefully restored Chinese home built in 1895, gave us a glimpse into the lives and traditions of a wealthy Chinese family in that era.

Our next lodging, the Capitol Kempinski Hotel, had recently opened after a restoration that combined two historic structures. This location placed us within walking distance of several major museums, the famed Raffles Hotel, St. Andrew's Cathedral and the spectacular bayside Merlion Park, all within a 10- to 15-minute walk.

We headed first thing in the morning to the 160-year-old Singapore Botanic Gardens. We delighted in exploring this UNESCO World Heritage Site, whose 203 acres of tropical gardens offer miles of hiking and jogging trails, three lakes and a spectacular orchid garden.

At nightfall the city transforms itself into a nocturnal kaleidoscope of color. The horseshoe-shaped bay presents a Las Vegas-like fountain show with sound and lights, while the city's signature Singapore Lion spouts a massive stream of water from its jaws as hidden lights paint the statue in endlessly changing colors and patterns.

Small tour boats festooned with colored lights twinkled in the water while in the background the three towers of the iconic Marina Bay Sands Hotel loomed large, topped by an enormous lintel shaped like the bow of a ship. When we visited that lofty perch the 360-degree view of Singapore was overshadowed by the enormous infinity pool that seemed to float in the air 57 stories above the city. Below, the giant, lotus-flower-shaped ArtScience Museum added to our sensory overload as constantly changing colors and textures painted the petals of the structure.

Behind the Marina Bay, on a 250-acre man-made island, are the Gardens by the Bay. We visited the site in the late afternoon in order to appreciate it during the daylight, especially the glass-enclosed Flower Dome and Cloud Forest, with the world's tallest enclosed waterfall. As the night sky darkened, a sound and light show began in the Supertree Grove, where a stand of 100-foot-tall, man-made trees changed colors from lavender to orange to purple to magenta to the rhythm of the music.

We appreciated Singapore's efforts to create an eco-friendly environment. Large, lovely trees graced most streets, while many buildings had walls and roofs covered with plants. In some areas pastel-colored historic shophouse rows stood in stark contrast to the surrounding modern buildings with their stunning architectural designs.

For our final exploration of the city, we stayed at Capella Singapore on Sentosa Island, known for its beaches, golf courses and attractions that include Universal Studios Singapore. A path behind the hotel led us down to a sandy beach and a free shuttle that transported visitors around the island. Our sense of contentment with our elegant room was enhanced by an exquisite meal in Cassia, the hotel's Cantonese-food restaurant.

For more information contact the Singapore Tourism Board: www.visitsingapore.com

The Marina Bay Sands hotel towers over Singapore and provides 360-degree views of the city. Photo courtesy of Doug Hansen. 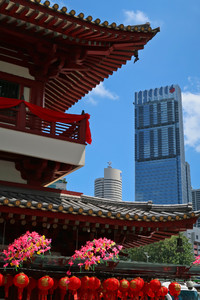 The Buddha Tooth Relic Temple contributes to the beauty of Singapore. Photo courtesy of Doug Hansen.

The Marina Bay Sands hotel towers over Singapore and provides 360-degree views of the city. Photo courtesy of Doug Hansen.