Discover the Greek Island of Ammouliani

In Tripiti Port, situated at the beginning of the Mount Athos peninsula in Halkidiki, the ferry to Ammouliani Island is already docked and the last of the passenger cars is backing onto the boat's platform. I'm struck by the scarcity of infrastructure. There's a short jaunt off the coastal road leading to the ferry ramp that passes a dirt patch that serves as a parking lot; that's it. I wonder about this island about which no one has heard. Mount Athos may be a UNESCO World Heritage Site, but Ammouliani has no fame to claim as far as I know.

It's two minutes before departure. I make a U-turn, reverse the car toward the ramp and back onto the platform, following the deckhand's gestures. The ferry departs on time. I head upstairs to pay for my passage and stay there to watch our approach over the two-mile stretch to the island.

As the ferry leaves the Eastern Orthodox peninsula behind, Ammouliani, formerly a dependency of a Mount Athos monastery, comes into focus. The island was home to only a couple of monks until the 1920s, when refugees from the "Greece-Turkey population exchange" arrived. Today there are about 600 permanent residents, but the population balloons with tourists and seasonal residents from spring to autumn.

Though Ammouliani is only 1.7 square miles, the entire island seems designed for the summer influx since, rather than cringing at the imposition, locals appear to thrive on the spirit of hospitality and merrymaking. An early morning stroll down the steep, nameless streets of the tiny settlement on the eastern shore passes a coffee shop packed with locals puffing cigarettes and sharing gossip. A chat with the corner store attendant reveals what's what, who's who and how Ammouliani's quality of life makes it a great place to live. The people are so affable that it feels like they're old friends and I've been coming here for years.

I'm staying at Helianthus, a guesthouse that stands boldly on the main square it shares with the Church of St. Nicholas and two other stone buildings built by the monks in the 1800s. Over breakfast my new acquaintance, Stratos, explains his connection to the island. His grandparents were two of those Greek refugees forced to leave their homelands nearly a century ago. They resettled here. Stratos' father was born in the very house that's now renovated into the guesthouse.

Stratos invites me for a boat ride around the island, and I accept. His father, a stout man with tanned skin and a shock of white hair, mans the helm. Ammouliani's 22 beaches range in size, and the hilly island's low vegetation reaches down to the clean, soft sand. Cruising around the island I see tiny beaches with remote access sporting the occasional tent beside a kayak that's been dragged onto the shore and laid on its side. We also pass large beaches with bars, restaurants, and rows of numbered umbrellas with lounge chairs and side tables serviced by waitstaff. The shallow, clear water surrounding the island supports boaters, anglers, divers, swimmers and all manner of floating devices for recreation-seekers.

Karagatsi is a favorite beach for locals. It sits at the edge of a campground, where snacks and drinks are sold from a small kiosk and a truck. Closer to town, one of the island's most popular beaches is Alykes. There, the barman at the Savana Beach Bar makes a work of art out of my pineapple cocktail. I dispatch it in no time and then head back to town for dinner.

I've been recommended three restaurants, which fits perfectly with my three-night visit. I notice the menus are translated into Greek, English and German. I'm surprised, since Ammouliani is not what first comes to mind when people think of Greek island holidays. It's not famous like Crete, Santorini or Mykonos, but people from Germany have solidly found it.

Familiar with Greek-style dining, where several small dishes are ordered and shared by the table, I request grilled feta, stuffed peppers, cucumber salad, moussaka and the catch of the day. It's quiet in the early evening. Colorfully dressed patrons stroll in and seat themselves. A light breeze intermittently visits my table at the water's edge, and I savor my last dinner under a starry night sky.

In the morning, I arrive at the ferry dock 45 minutes before departure to find a lineup of vehicles already queued. The frequency of ferry crossings is reduced when the tourist season is over. Seasonal residents close things up before leaving the island themselves until the spring. I recognize Savana's barman in the lineup ahead of me.

When the ferry arrives, vehicles are loaded not in order of arrival but according to size, and the deckhand directs them in like a seasoned maestro conducting Beethoven's Fifth. My little car is one of the last on, squeezed backward into a rounded corner at the end. I exit through the window. Despite the orchestrated chaos, the ferry departs on time. I head upstairs to pay, and stay there for the two-mile stretch to the mainland. Ammouliani has so far avoided aggressive self-marketing, but as the ferry leaves it behind, the island resides quietly in the minds and memories of those in the know. 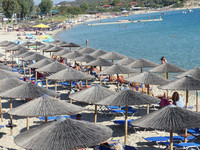 Alykes Beach is one of the most popular on the Greek island of Ammouliani. Photo courtesy of Elizabeth Willoughby. 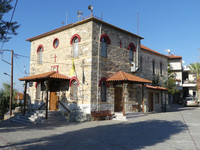 The Church of St. Nicholas, built by the monks in the 1800s, stands in the town square on the Greek island of Ammouliani. Photo courtesy of Elizabeth Willoughby. 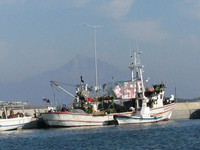 Fishing boats lie at anchor in the shadow of Mount Athos on the Greek island of Ammouliani. Photo courtesy of Elizabeth Willoughby.

Alykes Beach is one of the most popular on the Greek island of Ammouliani. Photo courtesy of Elizabeth Willoughby.