A wonderful assortment of solar system bodies converges high in the southeastern sky this coming week, but to see this, you'll need to head outdoors before dawn.

The most brilliant of these celestial bodies is the planet Jupiter. Jupiter appears so bright for good reason. It's a cloudy world some 11 times the diameter of the Earth that reflects into space more than half of all sunlight falling onto its cloud tops. The only reason it doesn't appear even brighter is because of its great distance from us, right now about 471.6 million miles.

Just to the east of Jupiter you'll spot two fainter planets — Saturn and Mars — each about 14 times fainter than Jupiter, but still bright enough to outshine most in the light of dawn.

Keep an eye on these planets over the next few days and weeks, and you'll be able to watch very clearly the orbital motion of the planet Mars as it appears to drift eastward from Jupiter and Saturn. This, of course, is an illusion caused by our lack of depth perception at such great distances. When the moon returns to this area of the sky on May 12 you will notice that Mars will have tripled its separation from these two giant planets.

If you've got a small telescope, try aiming it at these worlds. Since Mars is the nearest of the three (124.4 million miles right now), and it's a very small world, barely the size of North America, it will appear tiny in your telescope. You will easily be able to see its orange color, but probably not any surface features at this time.

We all know Saturn, of course, as the planet with the glorious rings, and even though this world currently lies at a distance of some 934.1 million miles and will appear small in a telescope, you will have little trouble spotting its spectacular rings.

Jupiter, on the other hand, is quite far away but is such a giant globe that even a small telescope will show some remarkable features. Look for a few pastel-colored cloud bands crossing the face of Jupiter, and nearby, you'll easily spot three or four of its largest moons that change their positions around Jupiter from day to day. It was the movement of these moons that convinced the 17th-century Italian astronomer Galileo Galilei that the Earth could not be the center of the universe, as many at the time believed.

With a camera and tripod, try taking a photo around 40 minutes before sunrise. Though light changes rapidly at dawn, you might start your shots at ISO 100, f/8, with a 1/3-second exposure, and adjust your settings as you go. Because the moon's light is brighter than that of the planets, it's perfectly normal to see the moon appear overexposed on your pictures. 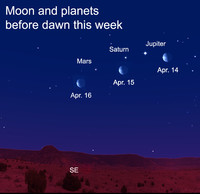 The most brilliant of the celestial bodies is the planet Jupiter.