Do you remember seeing Halley's Comet — the most famous of all celestial nomads — when it swung through our inner solar system in 1986? If you saw it, and even if you didn't, you'll have to wait until July of 2061 to see it when it comes back.

Personally, I'm looking forward to its return. OK, I'll be 109 years old that summer and I'll be quite thrilled just to see the sun rise, but that's my plan, anyway. In case I don't make it, I've got a backup strategy. And you can, too, if you're willing to rise early and head out to a dark, rural location next week.

On the mornings of May 5 and 6, fragments of this most famous of comets will pelt our planet's atmosphere in what astronomers call the Eta Aquarid meteor shower.

Meteors, or shooting stars, are specks of interplanetary dust hardly larger than a sand grain that encounter the Earth at speeds of tens of miles per second. As one of these slams into our air, it ignites and causes the neighboring atmospheric gases to glow. It's this fiery demise that we see as a meteor.

Those of the Eta Aquarid meteor shower are known to be pieces that have fallen off of Comet Halley during one of its many trips past our planet. Each year around this time, these fragments collide with our atmosphere almost head-on at speeds of some 150,000 miles per hour, and the brighter ones can often show a yellowish color.

Though historical records suggest that sky watchers have been seeing the Eta Aquarids since about 74 B.C., the shower was not officially "discovered" until Lt. Col. G. L. Tupman recorded it in the year 1870.

These meteors will appear all around the sky, but you can tell if one is part of the Eta Aquarid swarm by tracing its path backwards. If it appears to radiate from the direction of Aquarius, low in the east-southeastern sky before dawn, it is almost certainly associated with this swarm. If it appears to originate elsewhere, it's what astronomers call a sporadic or random meteor.

To view the celestial show, head away from city lights where the sky is dark and clear. Under ideal conditions, stargazers may see as many as 50 or 60 meteors, or falling stars, every hour coming from the eastern sky. The best times for viewing will be between midnight and the first light of dawn. At that time, the moon will lie near its new phase, so its light will not diminish the sky show this year.

The best part is that all you need to view the shower is your eyes, a lawn chair or sleeping bag and some warm clothing. No binoculars or telescopes are needed to view the shower — they would produce much too narrow a field of view to see the all-sky show. You may wish to have binoculars handy, however, to check out any persistent smoke trails left behind by some of the meteors.

Admittedly, it's not the great comet itself, but it can still be quite a dramatic show. Besides, it sure beats waiting 42 years! 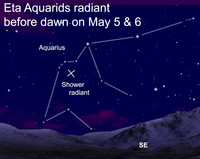 The best time to see the Eta Aquarid meteor shower is before dawn on May 5 and 6.