A Rare Transit of Mercury

A couple of weeks ago, I wrote about the elusive planet Mercury. Have you spotted it low in the western sky during the waning light of dusk? If you have, did you notice that it's appearing lower in the sky each night?

This is nothing to be concerned about. It happens because Mercury is orbiting the sun and, within a week or so, it will cross over to the opposite side of the sun. When it does, it will set before the sun, rise after the sun and be visible at dawn.

We don't usually see is the actual crossover itself. On May 9, however, we will.

On that day, the planet will drift in front of our star on its way westward. Astronomers know this as a "transit of Mercury," a phenomenon that only occurs about 13 times each century.

Since Mercury will appear to be 1/158 of the sun's diameter, you'll need a telescope with a power of at least 50x to see its tiny silhouette against the sun's brilliant face. And, much like viewing a solar eclipse, observing a transit with safety is extremely important.

Never look in the direction of the sun with the naked eye or unfiltered binoculars or telescope, and never use homemade filters, such as sunglasses, double-thickness darkened film, smoked glass, tinted glass or uncoated Mylar. These options may appear to reduce the sun's glare, but they will not cut the invisible radiation (infrared and ultraviolet) that can burn your eyes without you even being aware. Only proper solar filters are safe, and you can find some of the on the MrEclipse website (mreclipse.com/Totality2/TotalityApC.html).

Your first indication that the transit has begun will be the appearance of a tiny notch on the eastern edge of the sun. From the U.S. East Coast, the transit will begin around 7:13 a.m. EDT. The show will already be in progress at sunrise for Midwestern and West Coast viewers.

During the morning hours, the planet's silhouette will appear to drift slowly westward across the face of the sun, reaching its midpoint around 10:57 a.m. EDT (7:57 a.m. PDT). It will appear to leave the sun's disk at around 2:42 p.m. EDT (11:42 a.m. PDT). To learn the transit times for your area of the world, check out Tables 2 and 3 on EclipseWise site (eclipsewise.com/oh/tm2016.html).

Unless you have a telescope and are positive you have a proper solar filter fitted over the front of the instrument, I recommend checking with your local science museum, planetarium or amateur astronomy club (astronomyclubs.com) to find out when and where they will have telescopes set up. To learn more about the transit and techniques for safe viewing, visit the CosmicPursuits site (cosmicpursuits.com/931/guide-transit-of-mercury-may-9-2016/).

Be safe and enjoy this rare sky show! 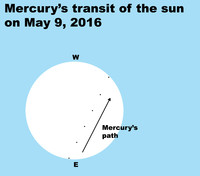 Mercury makes a rare transit across the sun on May 9.