A Stellar Romance ... Well, Sort Of

In just a few days, Saint Valentine's Day will arrive, a time for celebrating the universal emotion of love. And nowhere is love more represented at this time of year than in the starry heavens.

Ask any stargazer about this and most will mention Venus, sparkling in the western sky at sunset. After all, she is named for the ancient Roman goddess of love and beauty, while the ancient Greeks knew her as Aphrodite and the Babylonians as Ishtar. But I'll bet few modern sky watchers would even think to associate romance with the burly celestial hunter Orion, and yet he's the "star" of our story today.

Stargazers from the Earth's Northern Hemisphere can easily find the outline of his muscular body midway up in the southern sky after dark, while from south of the equator, he stands prominently in the north.

Of the several mythological stories we know about Orion, one thing is consistent: He was a real dog. No one enjoyed chasing the ladies more, and he relentlessly pursued the seven sisters of the Pleiades, as well as those of the Hyades — none of whom wanted anything to do with him.

When Orion eventually won the love of Artemis (goddess of the hunt and the moon), her overly protective twin brother, Apollo, sent a scorpion to sting and kill Orion, but the plan failed. So Apollo instead tricked Artemis into fatally shooting Orion with an arrow.

In honor of Orion's great hunting skills, her father Zeus (Jupiter, in Roman mythology) placed him prominently in the heavens, along with his two hunting dogs, Canis Major and Canis Minor. And in a cruel act of celestial taunting, he placed in front of him the sisters of the Pleiades and Hyades — forever beyond his reach. To protect Orion for all time, Zeus placed the scorpion (Scorpius) on the opposite side of the sky so that the two could never interact again.

This week, stargazers can find all these characters in the nighttime sky. Orion is outlined by its familiar hourglass shape; its two northernmost stars mark his shoulders while those on the southern end form his knees. In the middle appears a line of three equally bright stars, forming his belt, from which hangs his sword ... or so they tell us.

Follow Orion's belt stars in the opposite direction and you'll find Sirius, the brightest star in all the heavens and a diamond in the collar of Canis Major, Orion's great hunting dog. Canis Minor appears as a tiny star grouping to its northeast, marked by its only bright star, Procyon.

And the scorpion? Well, you won't find him this week; this constellation rises as Orion sets and sets as Orion rises, just as Zeus had arranged.

This week, if the sky is clear where you live, bundle up and take your sweetie out for a leisurely stroll among the stars ... What could possibly be more romantic! 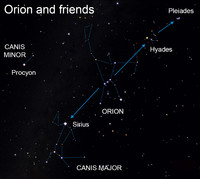