Q: This is a photo of a bar cabinet I purchased in St. Augustine, Florida. When opened, there are two surfaces for mixing drinks and storage for alcohol bottles, also. Each side opens, revealing places for glassware. The inside of the top lid and outside of the closed cabinet lid have carved Asian scenes in relief. The feet represent winged creatures with claws. The wood does show some wear, but overall, it is in good shape.

I was wondering if you could help me find out what it is worth and where I would go to sell it.

A: Many bar cabinets were made in China in the late 1800s to early 1900s. Often, they were made using elm, mahogany or cherry. They were designed for export to Europe and the United States. During the 1920s to 1940s, cocktails were extremely fashionable, and there was a big demand for bar cabinets. There is still interest, but it is much more modest. Because there is minimal demand, selling one can be difficult. Some options include selling on the internet, to an antiques dealer, on consignment with a dealer or at an antique auction.

Similar bar cabinets made in China have been seen on eBay, selling in the range of $200 to $500.

Q: I have enclosed a photo of the mark on the bottom of a pottery figurine I have. It is a boy carrying a smaller child on his back. On the front of the base are the words: "He ain't heavy, Father, he's m' brother." It is about 8 inches tall, decorated with a green glaze and in excellent condition. I think my husband bought it years ago, and I would like to know its history, maker, vintage and value.

A: The Boys Town Pottery Studio made your figurine. Boys Town was founded by Catholic priest Father Flanagan in Omaha, Nebraska, in 1917. He recognized the need for providing help, education, guidance and a home for boys who were orphaned. In 1940, William Wilkins and his father, James, were hired as instructors. They developed a successful ceramic instruction program for some of the boys. Their studio art wares were sold in the Boys Town Gift Shop. After the death of both Wilkins men, the pottery began to decline. It closed in 1993.

Your figurine represents the Boys Town philosophy. It was made in the mid-1900s and would probably be worth $25 to $50. 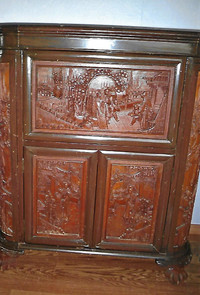 Cocktails and bar cabinets were fashionable in the 1920s and 1940s. 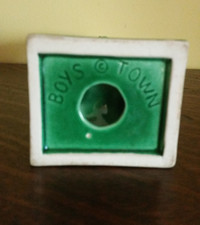