Q: I have enclosed a photo of an antique porcelain pitcher. It is decorated with a scene of a young woman holding a basket. She is wearing a long dress and a head scarf. Above her is a country scene against a blue band. The pitcher is about 6 inches tall and is in excellent condition. On the bottom of the pitcher are the words "Royal Bayreuth, Bavaria."

Any information regarding the age, maker and origin will be appreciated.

A: Your pitcher was made at the Tettau Porcelain Factory. They have been located in the small village of Tettau in the beautiful Bavarian ski country since 1794. Porcelain that was marked "Royal Bayreuth, Bavaria" was made from 1870 to 1919. It is believed that porcelain pieces marked "Royal Bayreuth" were intended for export to the United States. Your pitcher is decorated in the style of their Brittany Girls series that was inspired by the Britain's rural countryside. The transfer print scenes decorated novelty pieces that include pitchers, candlestick holders, dresser sets, teapots, small dishes and salt and pepper shakers.

Your pitcher was made around 1900. Similar pieces can be seen selling on the internet in the range of $45 to $65.

Q: Enclosed is the mark on an antique porcelain plate. It is about 13 inches in diameter and is in perfect condition with a scalloped edge and pastel flowers against a white background. There are seven shallow depressions, with one in the center.

We can't figure out what it is used for and hope you can tell us.

A: You have an antique oyster plate. Each depression, or well, was used for serving an oyster, and lemon or vinaigrette was served in the center. Oyster plates were extremely popular in the Victorian Era. Yours was made by Remy Delinieres in Limoges, France. He started his whiteware factory around 1879. He did not decorate his porcelain until 1881 when he established his decorating workshop. China painting was all the rage with ladies of leisure in the United States. Some of his whiteware was exported to the United States to be used by enthusiastic amateur artists. In 1900, the factory was acquired by L. Bernardaud and Co. Oyster plates were also produced in Germany and the United States.

Brittany Girls series was made by Royal Bayreuth. 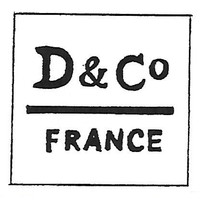