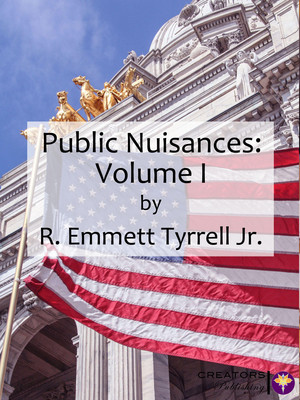 R. Emmett Tyrrell Jr. is founder and editor in chief of The American Spectator, a political and cultural monthly, which has been published since 1967. He also writes a weekly syndicated newspaper column that appears in such papers as the New York Post, Los Angeles Times, The Arizona Republic, the San Francisco Examiner, the Washington Times and The Orange County Register.

Tyrrell's most recent best sellers have been The Impeachment of William Jefferson Clinton, published by Regnery, and Boy Clinton: The Political Biography, also under the Regnery label. In early 2007, Nelson Current will publish The Clinton Crack-Up: Bill Clinton After the White House. His previous works include Madame Hillary: The Dark Road to the White House (Regnery Publishing Inc., 2004), The Conservative Crack-Up (Simon & Schuster, 1992), The Liberal Crack-Up (Simon & Schuster, 1984) and Public Nuisances (Basic Books, 1979). He also edited The Future That Doesn't Work: Social Democracy's Failure in Britain (Doubleday, 1977). His articles have appeared in such publications as The Wall Street Journal, Harper's Commentary, The New York Times, National Review, The Spectator (London), The Sunday Telegraph (London), Le Figaro (Paris), The Washingtonian, New York Magazine and the Yale Law Journal.

Tyrrell appears frequently on television, having been a guest on The Editors, Media Watch, CBS Morning News, ABC Evening News, ABC's Good Morning America, The MacNeil/Lehrer Report, ABC's Nightline, NBC's Summer Sunday USA, C-SPAN, PBS's Firing Line and Late Night America. In July 1994, he was featured in a segment on Dateline NBC and was profiled in The New York Times Sunday magazine. Also, he was the subject of an article in the June 1994 issue of Esquire magazine.

Tyrrell founded The American Spectator (originally called The Alternative) in 1967, after receiving a master of arts in history from Indiana University, where he also received his bachelor of arts in 1965.

In 1979, Time magazine named Tyrrell one of the 50 future leaders of America. In 1978, the U.S. Jaycees chose him as one of their "Ten Outstanding Young Americans" of the year. In 1977, he received the American Institute for Public Service's Award for the Greatest Public Service Performed by an American 35 Years or Under. The same year, he was presented with the American Eagle Award from the Invest-In-America National Council.