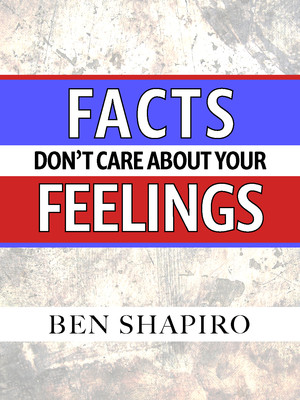 They say history repeats itself. We’ve got a lot of work to do to end up on the right side of it after Election Day 2020. This curated selection of columns is quintessential for any Ben Shapiro fan or skeptic. He offers a sharp, insightful reflection on American politics and culture over the last few years. Between elites who just can’t get down from their soapboxes, the left’s “thought fascism,” the rampant media, and more, the nation is in trouble. And if conservatives don’t act fast, they’ll get what they deserve . . .

“Facts Don't Care About Your Feelings” is a collection of columns written by Ben Shapiro. Published between 2016 and 2019, these columns highlight Donald Trump’s campaign, election and presidency. The book is divided into 10 chapters that run the gamut from religion to government to the First Amendment and other compelling issues readers on either side of the political aisle will enjoy.