Feeling Royal in an Irish Castle

I can't have been the only little girl who knew deep in her heart that she was to the manor born and someday would be restored to her rightful place. I thought I had outgrown that fantasy until we stayed at Ashford Castle in Cong, County Mayo, Ireland. We should have arrived by coach-and-four down the long, winding entrance road and through the gates, where a guard in a top hat would have greeted us.

Instead, the GPS led our rental car through the service gate. Our faux pas was politely ignored and the "whisking" began in earnest. A porter in emerald livery advised us to leave our luggage and escorted us to reception, where we were offered their signature welcome drink, Gin and Green. We then were taken to the most glorious guest room I have ever seen. It was proportioned like a palace with 16-foot ceilings, and the art pieces that festooned the walls were sized for a museum gallery.

My eyes flitted from each perfected detail: an unfettered view across the manicured lawns and dancing fountain to the shimmering waters of Lough Corrib, an antique desk with bottles of homemade lemonade and an Irish Shortcross-gin-infused chocolate bar. My husband, Phil, and I poured ourselves glasses of Winter's Tale sherry from the Waterford glass decanter on a silver platter. I sank into the comfy sofa while he posed properly in one of the facing porter-style canopy chairs, and we toasted each other's great luck.

"Look," I said, pointing to the television screen that greeted us by name. "This is the life!"

Beside the bed, a row of brass switches turned the fireplace off and on and worked the electric blinds and various lighting motifs. A card explained how we could select from thousands of newspapers and periodicals to be printed for our perusal or read online if we preferred. A notebook listed walking and jogging trails, and pamphlets described the various country pursuits available, from clay-pigeon shooting to archery, horseback-riding, falconry, sheepdog demonstrations, and both tree-climbing and zip-lining.

The bathroom was set in a corner tower where archers might have been on guard in a previous century. Although the raw stone spoke of its past, the heated marble floor, chandelier, second fireplace, brocade draperies and sparkling fixtures (including a rain shower) redefined luxury. But the piece de resistance was the four-poster marble bathtub.

And then there was the bed. The turndown service included a crisply ironed mat to step on before getting onto the bed itself. In some palaces, such as Versailles, the horsehair beds look like they would give you a royal pain in the back. But Ashford has perfected what it must be like to sleep on a cloud. Start with a four-poster swathed in gilded silk, the canopy of which is pleated and fringed. Then slide into their bespoke linens made of long-staple Egyptian cotton and finished with the castle logo. I'll admit that I couldn't leave without purchasing a set of linens of my own at Mrs. Tea's Boutique and Bakery on the grounds.

I don't have the architectural or design background to properly label the magnificence found in the public areas, and it's also difficult to separate original features from those that have been lovingly restored by local craftsmen. I looked up and marveled at coffered ceilings — a series of elaborate sunken panels — and down at the intricate carpet designs. The next day, when I was given a tour of the many variations of accommodations, I realized that not only are no two rooms alike, each has an original carpet design that matches its color scheme. The secret to this no-expense-spared renovation is that the designer, Toni Tollman, is the talented and imaginative daughter of the Red Carnation Group's founder, Beatrice Tollman.

We booked both of our dinners in the George V dining room, where we also were served sumptuous breakfasts, and the Connaught Room was where we enjoyed the quintessential afternoon tea. While we could have had lighter fare in the Dungeon - yes, really! — we couldn't resist the five-course seasonal menu that featured ingredients supplied by local purveyors with some items grown or foraged on the estate. Suffice it to say that the kitchen under Executive Chef Phillipe Farineau paid homage to his French training and his love affair with Irish ingredients and would satisfy the snobbiest foodie.

I admit to being a bit cowed by the formality and grandeur and worried about making a faux pas. The staff members were invariably polite, slightly deferential but also approachable. They found the sweet spot that defines hospitality and made us feel welcome and that no request would be too much trouble. The reason that this is so hard to explain is because I've never felt so at ease in what could have been an imperious setting.

This is a special-occasion splurge, and it probably costs more than double what you would spend elsewhere. We balanced it with bed-and-breakfasts and Airbnbs as we traveled around Ireland. They were all pleasant, but our nights at Ashford Castle are the stuff of which dreams are made.

Spending a few nights at Ashford Castle in Cong, County Mayo, Ireland, brings with it being pampered in every possible way. Photo courtesy of Philip Courter. 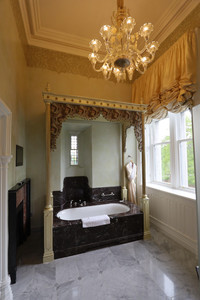 (SET CAPTION2) A four-poster bathtub is just one of the luxuries to be experienced at Ashford Castle in Cong, County Mayo, Ireland. Photo courtesy of Philip Courter. (END CAPITON2)