A Walk Through Time in Jordan's 'Rose City'

Jordan wasn't high on my travel wish list before I read "Leap of Faith: Memoirs of an Unexpected Life" by then-Queen Noor. The book brought to life the city of Amman, the agricultural countryside and the groups of women artisans the queen had helped organize into workshops so they could become independent. When I finished reading, I moved Jordan to the top of my list, and then finally I actually went.

What I remembered most about the book was the description of the pink landscape of Petra, a once-thriving metropolis that was largely abandoned by the eighth century A.D. and is now an archaeological treasure. So when my husband and I arrived in the country, that's where we went first. The adventure involved a four-hour coach trip from Amman on the Desert Highway to Wadi Musa, where we spent the night. The next morning it was just a short walk to Petra's entrance, and from then on, we experienced the very magic the queen had conjured up in her book.

To get to the actual city requires an easy mile-long walk through the Siq, which looks like a slot canyon but is actually a geological fault that branches off of the Bab as-Siq (Gateway to the Siq) valley. The walls here range from 299 to 597 feet tall, and the pathway is only 10 feet across. Some cobblestones laid by the Romans during the occupation that began in the year 106 are still intact, as are the ceramic pipes they put into place for the efficient use of water.

As we walked, we passed burial chambers, holes that once held ropes for drying food and black lines on the walls left by fossilized seaweed from when the earth was covered with water. We shared the narrow road with horse-drawn carriages that thundered through at breakneck speed carrying visitors who wanted to ride. Their drivers kept up a cheerful litany of "Hello," "Watch out" and "Beep-beep," but they never slowed down. They have the right of way, so at times we had no choice but to flatten ourselves against the rock walls and let them go by.

Of course, we had seen photos of the iconic Al-Khazneh, the Treasury, and the scene in "Indiana Jones and the Last Crusade" where Indy gallops away from it on a horse as the columns inside it collapse behind him. But nothing prepared us for seeing its immense size and beauty as we emerged from the Siq. A bigger surprise was that the ancient "Rose City" consists of some 102 square miles and much more remains to be excavated.

Petra, named in 312 B.C. by Greek invaders for their word meaning "rock," has been inhabited since around 7000 B.C. The city was built by the Nabateans, who settled here around the fourth century B.C. in order to have a protected place to live near a trade route. They were master carvers who created the elaborate facades that remain today and who lived in the caves behind and around them, at one time some 10,000 of them. When trade routes shifted toward Syria and sea routes around the Arabian Peninsula expanded, the Nabateans drifted away. The area was eventually abandoned and largely unheard of until a Swiss visitor, Johann Ludwig Burckhardt, discovered it again in 1812 and archaeologists began to uncover its secrets.

After that rediscovery, nomadic Bedouins populated Petra's caves until 1985. At that time UNESCO named it a World Heritage Site, calling it "one of the most precious cultural properties of man's cultural heritage." Its inhabitants moved to apartments that had been built for them in nearby cities.

For the next several hours we wandered among ornate columns, tombs, a winery, a Byzantine church, a monastery with 900 steps leading up to it, a theater, palacelike facades carved across entire hillsides and so much more. Colorfully garbed people rode by us on camels, donkeys and horses. Peppered among the ruins of this once-busy trading center are small cafes and stalls tucked into the pink rock as if they had never left. Lunch, tea and traditional souvenirs are sold only by people who had once lived and worked here, a promise made by UNESCO.

In one of those shops I met Raami Manajah, who was selling the elegant silver jewelry his mother had designed along with her book, "Married to a Bedouin." He invited me to come back later to meet her, which of course I did. The name of the shop was Ummi Raami, meaning "Raami's mother," and when I went back Marguerite van Geldermalsen was indeed there. She told me how she had come here from New Zealand on vacation with a friend, fallen in love with a Bedouin and married him. The couple raised three children in a cave without running water or electricity, and they were together until his recent death.

Her eyes lit up when I told her about my interest in Jordan being piqued by reading "Leap of Faith." She pointed in her own book to a picture of her with the queen and said, "The women in one of Queen Noor's workshops make the jewelry I design."

She had given me the perfect ending to my day in Petra.

Many organized tours go to Petra. We traveled with Smithsonian Journeys and recommend them highly: www.smithsonianjourneys.org.

(SET CAPTION) People once believed treasures were stored in the urn atop Al-Khazneh (the Treasury) entrance at Petra in Jordan. Photo courtesy of Phil Allen. (END CAPTION) 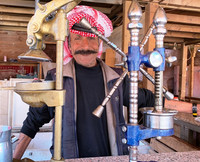 A Bedouin who once lived and worked in Petra, Jordan, now serves coffee to visitors from his shop. Photo courtesy of Phil Allen. 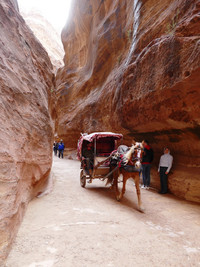 A horse-drawn carriage carries visitors through the Siq in route to Petra in Jordan. Photo courtesy of Phil Allen.

People once believed treasures were stored in the urn atop Al-Khazneh (the Treasury) entrance at Petra in Jordan. Photo courtesy of Phil Allen.