I'm always excited when I hear those words — especially when it's for an overnight trip, which I have experienced several times abroad in Britain, Italy, Norway and Russia and twice on Amtrak. There's something so romantic about riding the rails.

This fall, my husband Carl and I took Amtrak's Coast Starlight — known for its gorgeous journey along the Pacific — for the 35-hour ride from Los Angeles to Seattle. The gleaming silver double-decker train would cover nearly 1,400 miles through three states — California, Oregon and Washington — with 28 stops along the way.

As the Amtrak website touts: "The scenery along the Coast Starlight route is unsurpassed. The dramatic snow-covered peaks of the Cascade Range and Mount Shasta, lush forests, fertile valleys and long stretches of Pacific Ocean shoreline provide a stunning backdrop for your journey."

"It's our most popular ride because it goes along the coast and everyone loves that," noted our friendly car attendant, Mike, as he checked us in and showed us to our tiny compartment.

We had booked a lower-level "roomette"— about 3.5 feet by 6.6 feet — to be close to the nearby WCs and shower. Two facing chairs, used during the day, convert to bunks by the attendant in the evening. Other options are coach — with seats much roomier and comfier than on airlines — and business class; bedrooms (for two to three passengers, with convertible bunk sofa, easy chair and a WC with shower); the family bedroom; and accessible en suite bedroom. Meals are included for passengers in the sleeper cars (with room service option); business class passengers receive a $6 voucher for the dining car; coach passengers bring their own food and drinks or can purchase sandwiches, pizza and snacks in the cafe car or have a meal in the dining car, space permitting.

Shortly after departing Union Station in Los Angeles a dining car steward stopped by our compartment to get our names and reservations for lunch and dinner. "Welcome aboard" announcements made over the intercom covered the usual rules: no onboard smoking, don't disturb other passengers with loud music, wear shoes at all times while walking through the train, etc. They also listed menu items.

Emphasizing a long-standing practice on trains, the announcer explained, "It's a tradition on the Coast Starlight that passengers traveling in parties fewer than four join others in the dining car to fill out a table."

We learned that there was spotty cell phone service and no onboard Wi-Fi. I thought that was a good thing. This was our time to unplug and recharge, and I had brought a book to read — which I rarely got to.

After we settled into our little compartment with our carry-ons (large luggage can be left on racks near the train door or checked in the baggage car), Carl and I climbed the stairs to the second level, then wobbled through several moving train cars — sleeping compartment, dining car, business — to the glass-domed observation car, which proved to be the most popular spot to sit and gaze at the scenic view — waterfalls, bubbling brooks, small towns. Passengers shot photos, read books, ate sandwiches, sipped wine or chatted with new friends.

"This is so relaxing!" one woman sighed.

We sipped spicy bloody marys (purchased for $7 in the cafe car below) as we watched the scenery roll by; then, when our names were called for lunch, we headed to the dining car.

One of my favorite train experiences is meeting fellow adventurers from around the world over a meal. Over our two-day trip we dined with a charming British couple, Jackie and Andrew, from Yorkshire, England, traveling for a month around the West Coast. And Nathan, 26, from Salem, Massachusetts, and Rusty, 68, from Seattle — both traveling alone — environmentalists who opted to take the train "to reduce the carbon footprint."

"It's better than flying or driving," Rusty pointed out as he sipped red wine.

We also dined with Judy and Sandy, a mother-daughter duo from a small town in Kansas who had traveled to Southern California many times but no farther than Los Angeles. As the journey progressed north, they were amazed at the change in landscape, from ocean to golden fields and green crops.

I was happily surprised at how good the cooked-to-order meals were. The lunch menu offered a variety, averaging $12, including salad, veggie burger, yummy Angus cheeseburger, baked chilaquiles or steamed mussels.

For dinner I loved the Norwegian salmon; other entrees (averaging $20) included steak, chicken or pasta and desserts. Following an after-dinner sunset drink, I grabbed the lower bunk. It was nice to be rocked to sleep on the train.

Not normally an early riser, I did get up the next morning by the 9 a.m. breakfast deadline to have scrambled eggs and ham; other options included pancakes, quesadillas or omelets. Lunch and dinner along Puget Sound followed before our Seattle arrival.

"Thirty-five hours!" exclaimed curious friends as I shared photos of the adventure. Would I do it again?

Be on the lookout for special offers and promotions as well as senior, military, group and student discounts: www.amtrak.com/coast-starlight-train 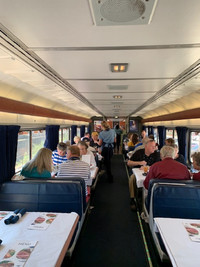 Passengers on the Coast Starlight enjoy lunch as they meet new friends in the dining car. Photo courtesy of Sharon Whitley Larsen.

A favorite relaxing hangout on the Coast Starlight is the observation car. Photo courtesy of Sharon Whitley Larsen. 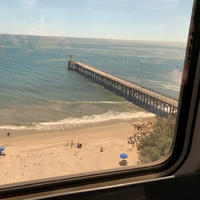 Passengers on the Coast Starlight enjoy scenery that ranges from the Pacific Ocean to Mount Shasta. Photo courtesy of Sharon Whitley Larsen.

Passengers on the Coast Starlight enjoy scenery that ranges from the Pacific Ocean to Mount Shasta. Photo courtesy of Sharon Whitley Larsen.