What is your image of Buenos Aires? Swirling dancers melted together while dancing tango? Evita waving from the balcony of the Casa Rosada? Juicy steaks roasting on an asado grill? Grand boulevards with a Parisian feel?

Argentina's shimmering capital covers 80 square miles — Manhattan is only 24 — and there are 48 distinct neighborhoods called "barrios." Confused by all the possibilities, we hired Patricia Kanelson, along with a driver, for a historical and practical overview. Her insights into the complex political issues, the citizens' love-hate relationship with Evita, warnings to avoid the subways and which taxis are safe were invaluable.

We could never have navigated the crowded Recoleta Cemetery — more magical than macabre — or heard the fascinating stories behind the facades. Evita is buried here in the relatively modest Duarte family tomb. Far more poignant was the statue of Liliana — who died in an avalanche on her honeymoon — and her faithful dog.

With advance planning, you can have a free guided tour of the Casa Rosada (the Pink House), the seat of the Argentine government. Here you can walk through the president's and vice president's offices and stand on the famous balcony overlooking the Plaza de Mayo. You need to book ahead and give ID and passport information online.

The second day we felt confident to explore some of the barrios on our own. La Boca — the birthplace of tango — is colorful in the extreme with brightly hued houses, murals, street artists and musicians, empanada stands and kitschy fridge-magnet wares along El Caminito, the main cobblestone strip.

We headed to one of the best antique markets in the world in San Telmo's Plaza Dorrego. Our first feeling was sadness since it seemed as if everyone was selling family heirlooms in this depressed economy. Fine crystal, silverware, jewelry, and rare records and books were on offer at reasonable prices.

We could have spent a month seeing a different museum every day, but the top of our list was the Museo de Arte Latinoamericano de Buenos Aires, or MALBA, with works by Diego Rivera, Frida Kahlo ("Self-Portrait with Monkey and Parrot") and Fernando Botero in the permanent collection. Especially fascinating were the interactive kinetic sculptures, where visiting children congregated. Timing was just right to refuel at the Ninina Bakery, a reasonable cafe with indoor and outdoor seating.

The problem is not what to order at dinnertime — the asado of grilled meats is mandatory — but which one and at what time. Buenos Aires runs so late that even a 9 p.m. reservation can result in a ghostly dining room. "How do they get up for work?" we wondered as the space filled up with portenos, as the natives of "BA" are called, even with young children in tow.

Everyone has a favorite parilla. We picked one alongside the picturesque dockland in the Puerto Madero that was recommended by our concierge and was less pricey than the famous one next door. We had no complaints about the succulent ojo de bife (rib eye), chunky lomo (tenderloin) or delicate mollejas (sweetbreads), which we relished along with a perfectly matched local Malbec.

Argentina's leather industry is legendary. My "find" was Zorro Patagonico for stylish jackets, handbags and shoes. I was entranced by a child's jacket in the window and was told I could have any jacket in my choices of colors and styles — even the sleeve from one and the cut of another — in four hours because their workroom was in the building. I couldn't resist buying one for a grandson, and the price in dollars was a bargain.

A few blocks away is Galerias Pacifico, built in the late 1800s as part of a railroad station. When the shopping mall was restored in the 1940s, five Italian muralists painted the central dome with breathtaking romantic allegories. Among the fashionable shops is one dedicated to everything gaucho, where you can be outfitted in cowboy gear or buy a silver-trimmed yerba mate gourd.

Tango is the quintessential ballroom dance that was born in Buenos Aires, although it isn't as popular in practice as in holiday promotions. Tourists are steered to tango performances that usually include a mediocre dinner. Research for something more authentic leads to milongas — dance clubs where both tourists and locals come to drink and observe but mostly to dance.

The Milonga Parakultural at Salon Canning is open only three days a week, and one challenge for the active tourist is that you need to arrive about 11:30 p.m. to get a seat. Performances don't start until around 2 a.m. After that amateurs and serious dancers show off their footwork.

A friend who had grown up in Buenos Aires had given me a list of not-to-be-missed sites that included the cryptic "Tango at La Glorieta." A few queries and a long taxi ride led us to a magical pavilion set in Barrancas de Belgrano park. On summer evenings, dancers of all levels and ages, singly and in pairs, couple up while children play on the sidelines, dog-walkers converse and lovers caress on benches, all to the haunting beat and the precise placement of the dancers' nimble feet.

We may have been the only tourists there, but we were entranced by what was undoubtedly the most genuine moment of the stay in this world-class city. 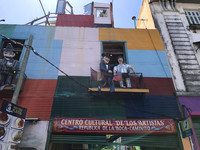 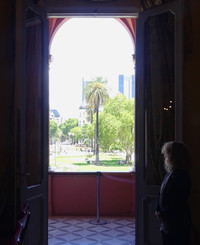 From Casa Rosada, the seat of the Argentine national government in Buenos Aires, it is possible to look out over Plaza de Mayo, just like the president does. Photo courtesy of Philip Courter.