Pasadena: Oasis of Art and History

Pasadena, a city within Los Angeles County, is a fascinating place with its own tone, presence and history. It's a vibrant place where art and history are alive and well.

The city, whose name is a Native American word that means "of the valley," was founded in 1886. Its indigenous people were the Tongva, who descended from Aztecan-speaking people.

But the man who most left his mark on modern Pasadena was Henry Edwards Huntington, a railroad magnate, nephew of Collis Huntington, one of the Big Four who are said to have made California (Leland Stanford, Charles Crocker and Mark Hopkins were the others) by creating the California railroad system from 1861 to 1900.

Huntington was a Renaissance man with various interests and passions evident in the Huntington Library, Art Collections and Botanical Gardens. His collections on display include an original Gutenberg Bible on vellum; a folio edition of Audubon's "Birds of America"; original letters of Charlotte Bronte, Charles Dickens, Abraham Lincoln and Thomas Jefferson; and paintings by J.M.W. Turner, Thomas Gainsborough, William Blake, Mary Cassatt and Edward Hopper. The compound was the former San Marino estate of Huntington and his wife, Arabella.

The museum and gardens are now one of the main treasures of Pasadena. Visitors to the gardens and museum can walk through the Japanese Garden, the Desert Garden, the Chinese garden and the Shakespeare garden — or visit the main building (Huntington's Georgian mansion), which houses the art collection. Qualified scholars come from all over the world to do research in the library.

Pasadena's magnificent Langham Huntington Hotel is also linked to the Huntington family. It was once Hotel Wentworth and later became a winter resort, which was purchased in 1911 by Huntington, who renamed it the Huntington Hotel and Spa. Today the hotel and grounds host weddings and costume clubs where members dress in appropriate early 1900s attire.

Art is abundant in Pasadena. The Norton Simon Museum (the collection of industrialist Norton Simon, 1907-1993) contains European art from the early Renaissance to the 20th century and has more than 2,000 pieces of South and Southeast Asian art.

It is well worth a visit any time, and I couldn't wait to return. I had missed seeing Vincent van Gogh's gorgeous "The Mulberry Tree," Cezanne's exquisite "Tulips in a Vase" and Monet's "The Artist's Garden at Vetheuil."

The Asian collection is on the lower floor. In one area a floor-to-ceiling windowed space gives the visitor a view of a seated Buddha outside. The various gods and goddesses inside, depending on the light, reflect on this glass and seem to interact with the peaceful solid figure. The inside figures are part of the Chola bronzes from India and include a Shiva figure from A.D.1000.

Norton Simon's second marriage was to actress Jennifer Jones, and it was then that his interest in Asian art grew. The couple honeymooned in India, and this led to his first purchase of Indian art. The entire collection was a "museum without walls" until 1974, when he began to seek a permanent home on Colorado Boulevard.

Outside today's museum a lily pond worthy of Monet fills the back space, along with nearby food and drink kiosks. Scattered tables provide places to sit, rest and contemplate while having refreshments. Taking a stroll around the large lily pond is a mini lesson in itself on the habits of dragonflies, who find their home there. Sculptures are scattered about, including those by Aristide Maillol, Barbara Helpworth and Jacques Lipchitz.

In front of the museum visitors are greeted and then bade farewell by Auguste Rodin's sculptures -"The Burghers of Calais" and others — while "The Thinker," a favorite of Simon's, sits on the southwest Colorado Boulevard side.

Pasadena's architecture also captures history and artistry. It is home to the magnificent Arts and Crafts home, the Gamble House (1908) and to an area of historic craftsman bungalows.

It was with the Gamble House that Charles Sumner Greene and Henry Mather Greene (the noted architects of the Greene Bros. firm) developed the style. The Gamble House is a California Historical Landmark and on the U.S. National Register of Historic places.

But besides all this, Pasadena is also oak-lined streets (the oak tree is protected here), the gentility and grace of Victorian homes and sloping lawns and the San Gabriel mountain range that overlooks downtown's old Pasadena with its crisscross street where you can walk "kitty corner" with impunity. Also worth a stop is a bookstore that is now 120 years old — Vroman's — where you can spend half a day browsing books and beautiful gift items.

There's also the Pasadena Playhouse, where the seed was planted in 1917 when a group of actors settled in Pasadena. After performing for several years they moved to the newly constructed Pasadena Playhouse. It was the first training ground for many now-famous actors and actresses, such as Dustin Hoffman and Gene Hackman. Hundreds of new plays by writers that included Tennessee Williams and Eugene O'Neill began there. George Bernard Shaw called it "the Athens of the West."

Pasadena is a bit of the charm of old California, as if Henry Huntington had waved a magic wand and told time to hold still, just a little bit — an oasis from the freeways, the hustle of modern Southern California. It is a place to renew, be inspired by art and history, and take a breath. 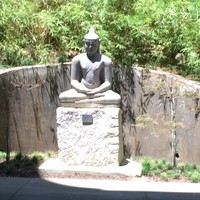 A statue of Buddha sits on the grounds of the Norman Simon Museum in Pasadena, California. Photo courtesy of Karen Kenyon. 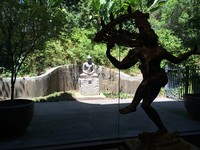 An Indian sculpture inside seems to interact with that of Buddha seated outside at the Norton Simon Museum in Pasadena, California. Photo courtesy of Karen Kenyon.