The Cheese Train and Raclette Tasting Reign in the Alps

Winter and cheese in the Swiss Alps go together like surf and turf by the sea. Gourmands even call this part of the French-speaking range in southwestern Switzerland the "Holy Grail of cheese." After the snow melts each spring, cows make their annual ascent to spend summers in high-altitude pastures and graze on the season's bounty of grass, flowers and herbs — Mother Nature's recipe for making splendid curds and whey.

When I heard about Switzerland's new Cheese Train in canton Vaud and raclette cheese-tasting in neighboring canton Valais, I was there.

The Cheese Train, which debuted on the Golden Pass Line last winter, runs each year from December to April, rekindling romantic day trips first offered to tourists at the turn of the 20th century. Back then they, too, were curious about the lovely cheese made in the mountains, an industry that dates back to the 12th century.

I was there during summer, but I got a taste in more ways than one of a simpler rhythm of life that contrasted nicely with my visit to the swank jazz town of Montreaux at the foot of the Alps on Lake Geneva's shores.

Time stood still when I boarded the restored Belle Epoque carriage at Montreux station, setting the mood for the hourlong journey to the village of Chateau-d'Oex at 3,143 feet above sea level. Upholstered seats, rich wood paneling and shiny brass fixtures (seat numbers are etched on brass plates) reminded me of a day trip I once took on the Orient Express.

Chateau-d'Oex (population 3,000), Rossiniere (population 500) and Rougemont (population 900) are the three main villages of the Pays d'Enhaut region. Nestled in a quiet valley, here elegant chalets aged by time are surrounded by forests, meadows and high, rocky cliffs. L'Etivaz cheese (named after the hamlet of its origin) is made by 70 families the way it was centuries ago - always in a copper cauldron and always over a wood fire.

In the rustic ambience of Le Chalet Restaurant guests on the storybook-like tour watch a demonstration of L'Etivaz in the making as cheese-makers stir organic milk by hand, then transform it into marvelous wheels of the celebrated cheese that is protected by an appellation d'origine protegee, a government designation that guarantees quality and authenticity of origin — the first Swiss product to receive this status. Aging takes between four and a half months to two years, and by the time the first snow falls the hard Gruyere-like cheese, aromatic with a nutty flavor and a sharp finish, is ready to feast upon.

After the demonstration guests partake in cheese fondue, the communal tradition of breaking bread in the Alps. With a pot of warm melted cheese before me I dipped chunks of bread into the divine, gooey blend and prayed for the meal not to end.

The tour continues with the last leg — an enchanting visit to the Museum of the Old Pays-d'Enhaut, one of Switzerland's most important folk-art museums.

Remarkable collections preserve the history of this mountain region isolated during the Middle Ages that had become a world of its own. Inhabitants lived in chalets they built from wood cut in the dense forests. They raised cows and created a thriving business making cheese and selling it at the Vevey markets by the lake, a trek made by foot, explained Frederic Delachaux, who directs tourism efforts in the region. Today, he added, cheese is the most important product for the region.

"The museum," said Delachaux, "is a treasure."

Across the cantonal border in the Valais my appreciation for Switzerland's esteemed mountain cheeses reached another height.

I had never thought of cheese as a main dish, and I had never imagined that a cheese-tasting could involve just one cheese. Raclette — the name of the cheese and the meal — is made from the raw milk of black fighting cows.

"Raclette is made only in the Valais and is the most traditional dish," said my guide, Valerie Levrand, a native of the area whose family raised black cows.

The black bovines (their fighting instinct for dominance is limited to head-butting) graze all summer on hundreds of flowers that grow in the area's 16 Alpine pastures. While the method of cheese-making is the same in every village, the difference lies in the distinct taste of the cows' milk because different flowers grown in the various fields give the cheese from each village its own character and flavor.

Raclette comes from the French word racler (to scrape) and is traditionally a group meal that can last for hours (eating alone is not recommended). A half-wheel of the semi-hard, silky cheese is heated over an open fire until it softens. Then it is scraped onto a plate and eaten in its velvety state with boiled baby potatoes, pearl onions, gherkins, gorgeous rye bread and meats air-dried with herbs (another Valaisanne specialty).

In the middle of the country's largest wine region, the 16th-century Chateau de Villa in Sierre is a nobleman's castle turned wine-and-cheese destination that houses a wine museum — L'Oeonotheque, with 600 wines for tasting and purchase — and a restaurant offering tastings of Raclette du Valais AOP.

My companions and I had just finished an invigorating walk along the wine trail through the vineyards and nearby forest, which ended at Chateau de Villa. Our appetites were ready for the Degustation de Raclettes, a culinary odyssey of sampling five different raclettes, one long scrape at a time. In the outdoor garden terrace we sipped Fendant, a local white wine that goes best with raclette, all the while pondering each mouthful for subtle floral nuances.

The meal was fabulous and filling and finished with the traditional apricot sorbet with apricot Schnapps. Everything we ate was locally made. Apricots grow abundantly in the area, and Schnapps is produced nearby.

The day before at higher elevation I had paid a visit (actually a pilgrimage) to Bagne, the "Temple of Raclette," where master cheese-maker Eddy Baillifard, whose family has been making raclette for generations, was immersed in his craft.

Inside Centrale Laitiere, the central dairy, Baillifard, the happiest man I have ever met, was in his element separating the curds from the whey. And in the distance clanging bells was a dead giveaway that the black cows, the source of raclette, were grazing in the fields above.

For train travel around Switzerland, the Swiss Pass offers unlimited travel on trains, buses and boats as well as free entry into museums. It must be purchased before leaving the United States: www.swiss-pass.ch..

My hotel in Chateau d'Oex was the Hotel de Ville, www.hdvoex.ch, which was lovely, in the center of the village and five minutes from the train station. Amenities included breakfast, Wifi, and coffee and tea throughout the day. 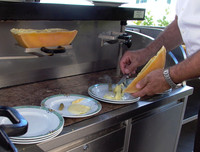 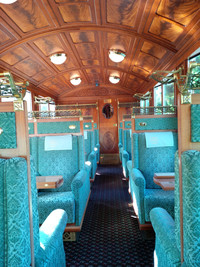