Explore Croatia on a Cruise

Videos of waterfalls, woodlands and glistening lakes in Croatia's national parks filled the large screen, the landscape serving as background to master Croatian cellist Ana Rucner, who performed live in front of the tableaux. When she launched into an allegro movement of Vivaldi's "Four Seasons," her bow dancing across the strings, the video flashed to a fiddler in a mountain village playing the same piece, his movements mirroring hers. Next Rucner appeared in town on the digital version performing with the screen musician as local singers danced around them. All the while the live Rucner played identical music as her film doppelganger.

The bravura performance in Split took place in the garden gallery of noted sculptor Ivan Mestrovic, born in Vrpolje, Croatia. The amazing evening, just for the passengers of the Azamara Pursuit, was one of the highlights of our intensive Croatia cruise. The eight-day round-trip voyage from Venice docked only in Croatian ports along the Adriatic. With Rijeka our first port and Hvar our last, we covered 300 land miles. My friend Barbara and I found the one-country cruise engaging and we enjoyed Azamara's special experiences.

"Azamara tends to stay later in ports," said Tony Markey, cruise director on our ship. "The longer time makes a difference in the Mediterranean. Cannes, Nice, Monte Carlo and its casino are much different at night than in the day. We also stay overnight in ports."

The 10 p.m. departure from Split made it possible for the cruise line to host the evening concert.

To reach the concert venue required eating dinner before the 7 p.m. departure from the ship. When we returned, the Pursuit welcomed us with a chocolate buffet of cakes, cookies, puddings and pies as well as fountains of chocolate sauce for drizzling on fruit.

Azamara pays attention to food. The chefs prepared tasty — if somewhat repetitive — fare in the Windows Cafe, and the staff watched vigilantly to see if guests required fresh drinks, coffee refills or anything else. On Azamara we didn't need to rush onboard to make reservations for the specialty restaurants in order to enjoy good meals. We could do that in the dining room. That said, Prime C, the extra-fee steakhouse, was worth the price.

At the White Nights deck party, another complimentary onboard experience, guests wore white if they cared to. The crew served made-to-order pasta, pork, seafood kebabs with lobster, steak, grilled fish and other entrees at some dozen stations. During dessert and on into the evening the ship's singers belted out a mix of oldies and contemporary tunes as they led us in dancing. On a 700-passenger vessel, the party felt friendly instead of forced and crowded.

We were a little disappointed that the two shore excursions we went on didn't deliver what was promised. We signed up for Hvar Island to meander through picturesque Brusje and to see the island's lavender fields. Instead, immediately upon leaving the ship we stopped for a snack that nobody needed at a nondescript roadside eatery that also sold lavender. Instead of Brusje we continued to Vrboska. The guide told us that the original description was wrong. When we complained, Azamara provided a small refund, but we still missed what we wished to see.

Our tour of Trogir Island from Split turned out to be a short talk about a church before being instructed to "explore" on our own with no suggestions provided. Instead of ending at the ship, the guide marched us through Diocletian's Palace, which, from our vantage point, appeared to be a huge hall filled with vendors selling tchotchkes. Afterward he pointed "that way," telling us to walk back to the ship. Since it was 95-plus degrees and I had a broken foot in a brace, that direction was neither helpful nor easy to accomplish. Azamara's shore director responded by saying that we should be happy that the guide gave us a bonus tour of the palace.

Azamara prides itself on its in-depth shore experiences, so the outings should not have been problematic. That being said, Barbara and I really enjoyed Azamara's onboard ambience and offerings. In fact, we're searching for another intensive Azamara cruise to take. Next time, however, we'll arrange most of our shore tours on our own.

To book this cruise or one of many others: www.azamara.cruiselines.com 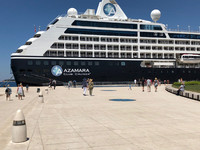 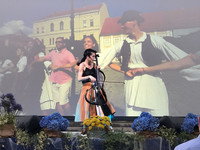 Ana Rucner performs a cello concert for passengers of the Azamara Pursuit in Split, Croatia. Photo courtesy of Candyce Stapen. 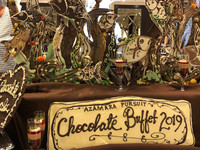