Special Interest Trails Can Be Roadmaps to Fun

For Elizabeth and Andy Beyer, a drive along California's Sonoma Valley Wine Trail was fulfilling a lifelong dream. They satisfied their love for the beverage during tastings at favorite vineyards. It was food that tempted Mary and Roger Nicholson to visit Louisiana's Cajun Bayou. They sampled traditional dishes that included fresh-from-the-sea food and lip-smacking desserts. A taste for history prompted Linda Thomas and Harry Palmer to explore the First State National Historical Park in Delaware. Sites along the way bring to life chapters of the history of that state — and of America.

Many people have followed one or more of the 300 or so wine trails in the United States, stopping to combine treats for their palates with excursions to towns and through scenic countrysides. But numerous other routes provide introductions to interests ranging from covered bridges to civil rights and from berries to bourbon.

The Cajun Bayou Food Trail in Louisiana celebrates that area's rich gastronomic culture. It's comprised of restaurants that serve such favorites as gumbo, jambalaya and pecan pralines. Some family-run eateries follow recipes that have been passed down for generations.

Part of the story related by the First State National Historical Park in Delaware deals with the diversity of European immigrants who settled the area. Dutch, Swedes, Finns, English and Germans created a melting pot of cultures. Old Swedes' Church was built in 1698-99 using bricks that served as ballast in ships that brought colonists from Sweden. From 1732 to 1777, the New Castle Court House was where Delaware's Colonial assembly met. The John Dickinson Plantation (1740) was the boyhood home of the primary author of the Articles of Confederation and one of the drafters of the U.S. Constitution. The property occupied land that was used for growing tobacco and grain.

Restaurants along the Oyster Trail in Gulf Shores and Orange Beach, Alabama, serve bivalves in traditional ways as well as a choice of imaginative offerings that include barbequed, fire roasted, Alfredo-style and in ceviche.

Variety of a different kind greets visitors to the Fields of Gold Farm Trail in Virginia's Shenandoah Valley. People may stroll through a farmers' market, tour a working spread, feast at field-to-table restaurants and pick their own fruit at an orchard.

They use berries in a very different way in Surry County, North Carolina. The colorfully named Surry Sonker Trail connects places — including a bakery, general store and winery — that serve that strangely named dessert. The story is that the treat was created in the early 1800s by homemakers seeking ways to stretch the use of fruit or use it before it rotted. Recipes include fruit sweetened with sugar, molasses and other ingredients blended into unshaped dough, so like snowflakes no two are exactly alike.

Where there's food there are usually beverages, and the birthplace of one is acclaimed along the Kentucky Bourbon Trail. Guests visit a distillery that chars barrels to add flavor and another that allows visitors to pick their own bottle off the assembly line. Opportunities to treat your taste buds include such unique offerings as bourbon truffles.

Those who prefer the word "soft" before their drink may set their sights on the Coca-Cola Trail. Places related to that popular beverage are described in a book of the same name, which can serve as a guide to museums, historic bottling plants and other destinations around the country. The story began in Vicksburg, Mississippi, where Coke was first bottled in 1894. Other stops can include the Dawson & Stevens Diner in Grayling, Michigan, which doubles as a Coca-Cola museum; a former bottling plant in Los Angeles that was built to resemble an ocean liner; and outdoor "ghost signs" advertising Coke that were painted decades ago and have been refurbished.

Some states double down on the trails concept. Maine, for example, has a Sculpture Trail that leads to 34 outdoor artworks located along 273 miles of its coastline; a Thoreau-Wabanaki Trail, which includes canoe routes the author followed during trips to that state; and a Freedom Trail in Portland that leads to sites associated with the Underground Railroad and the anti-slavery movement.

Ohio also touts a choice of tantalizing trails. They include routes that focus upon interests as diverse as ghosts, covered bridges, ice cream and doughnuts.

Given Oregonians' love of nature, it's not surprising that among trails within its borders are paths for hiking and biking, seeing wildlife and wildflowers, and dozens of other routes. Most famous is a stretch of the Oregon Trail, the historic route that began in Missouri and which an estimated 400,000 farmers, ranchers and others followed in their quest for a new life.

Turn other pages of the past during drives to see the quilt blocks that adorn the sides of 60 barns in Oregon's Tualatin Valley. Some designs on the 8-foot-by-8-foot wooden slabs resemble traditional quilt patterns, while others display crops or animals, or relate to the farm family's history.

From seafood to sweets, berries to beverages and lots more, whatever your interest, somewhere in the country there's a trail just waiting for you. 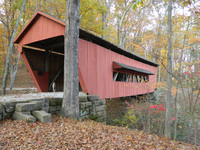 The Covered Bridge Trail is one of many ways to trace a passion through Ohio. Photo courtesy of Visit Fairfield County.

. Visitors to an orchard on the Fields of Gold Farm Train in Virginia's Shenandoah Valley have the opportunity to pick their own fruit. Photo courtesy of Victor Block.