Ailsa balanced on my hand when we paused on our woodland walk at Ayrshire's Glenapp Castle Hotel in Scotland. A striking figure with chestnut red patches that highlighted her brown coloring, Ailsa, looked like she belonged amid gentry. After eyeing me intently, she showed her approval by waggling her tail before flying off to touch down on the branch of a spruce tree.

A Harris's hawk, Ailsa was one of five raptors that showcased their hunting instincts during Glenapp's falconry demonstration. For two hours our merry band of guests, including children ages 4 years to 17 years, took turns holding bait in our leather-gloved fists while Rebecca, the falconer, commanded the birds and explained their behaviors. The tawny eagle stole the show. Using his 5-foot wingspan with fighter-pilot accuracy, Fernley glided so precisely to his mark that even the preschooler calmly presented his hand as a landing pad.

The 1870 manor house, complete with towers, turrets and battlements, sits on 36 acres overlooking the Firth of Clyde. A Relais and Chateau property, Glenapp delivered our fantasy castle experience even if it never served as a real castle. The manicured grounds, plush bedrooms and noted restaurant contrasted sharply with the lodgings on our first Scotland trip decades ago.

Just starting out, we had scraped together enough money to travel from the United States and sightsee, but only if we stayed at bath-in-the-hall bed-and-breakfast homes that served reheated boiled beef dinners for an extra pound or so. We promised each other we'd be back one day to lodge at castles.

That's how we came to be castle-hopping along Scotland's west coast. We began 80 miles north of Glenapp at Castle Levan, just outside Gourock, a 20-mile drive west of Glasgow International Airport. Doubting our GPS's instructions to turn into a subdivision, we drove to street's end and saw Castle Levan. Previous owners sold acres of woods — hence the subdivision — to fund the castle's renovation. Constructed in 1457 as a single-tower defensive stronghold, Levan's hillside perch afforded views of enemies coming from the river as well as those sailing up the firth. Sometime later a second tower was built and connected to the first.

Although not the palatial structure we expected, Levan's barrel-vaulted ceilings, 4.5-foot-thick walls and narrow winding stairs impressed us with its authenticity. After flying across the Atlantic and driving from Glasgow, we had no energy left to drag our oversized luggage to the third level Laird's Room. We gave up the large chamber with its four-poster bed and windows for the smaller, ground-floor Knight's Bedchamber. Anchored by a deep bathtub big enough for two, the room was atmospheric but dark. The two narrow slits for archers let in almost no light.

Gourock offers swimming in an outdoor public pool and sunning on nearby Clyde beaches. After a big breakfast, we departed for Culzean Castle, near Maybole, 58 miles south of Gourock. Surrounded by 600 acres, the baronial castle designed by Robert Adam in the 1770s and enlarged in 1877 sits cliff-side overlooking the firth. Although Culzean offers overnight lodging, we came for the day. Owned by the National Trust for Scotland, castle highlights include Adams' multilevel oval staircase, a capacious kitchen and a collection of flintlock pistols. The woodland paths, swan pond and walled garden abloom with colorful flowers delighted us most. After a tasty chocolate tart in the Tea Room, we drove to Glenapp.

From Glenapp we headed north to Stirlingshire to revisit Stirling Castle, a massive fortress whose extant structures stretch from the 14th to the 18th centuries. We wanted once again to walk the courtyards where the royals paced, matching sites to personal stories. James IV's Great Hall, built in 1503, reigns as the largest such structure in Scotland, and James V's elaborate Royal Palace built in 1540 to impress his French wife, still amazes with its hundreds of exterior sculptures and tapestries (replicas) in the royal rooms. In December 1566 Queen Mary hosted a three-day party, complete with the first known fireworks in Scotland, to celebrate the baptism of her son. Just four months later, however, the besieged monarch handed over 11-month-old James to protectors, never to see him again, and in July 1567, she was forced to abdicate.

We stayed in Glasgow before heading back home, happy for our experience of diverse castles and manor homes and grateful to have been able to fulfill a promise we had made to each other long ago.

Culzean Castle and Country Park provides overnight accommodations and is open to the public for tours and day use of its extensive grounds: www.nts.org.uk/visit/places/culzean.

Stirling Castle is busy in high season, so it's wise to purchase entry tickets ahead of time online: www.stirlingcastle.scot. 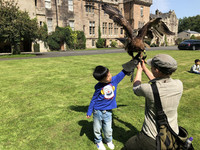 A child offers his hand as a landing place for a falcon at Glenapp Castle Hotel in Ballantrae, Scotland. Photo courtesy of Candyce H. Stapen. 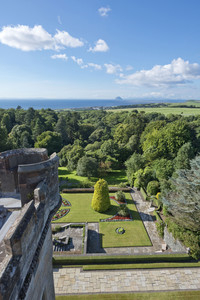 The view from Glenapp Castle in Ballantrae, Scotland, is one many reasons visitors come here to stay. Photo courtesy of Candyce H. Stapen.