The Old West Begins in the Nebraska Panhandle

I was standing in the small Nebraska Panhandle city of Sidney, staring at a big statue of a Pony Express rider and pondering the question of where the Midwest ends and the West begins. The good people of Omaha at the eastern end of the state might consider themselves more Midwestern, but out in the panhandle, which bumps up against Colorado, Wyoming and South Dakota, the land looks very Western and the history is full of characters and events from Old West lore.

Take, for example, Sidney, which in the years 1860 to 1861 was a Pony Express stop, then in 1867 was a military outpost in Indian Territory and finally in the 1870s the jumping-off point for the hardscrabble souls heading to the Black Hills gold rush. The town in the late 1800s was among the wildest of all the Wild West towns before it was tamed. A local historian told me the trouble with Sidney was its benign name.

"If we had been called Deadwood or Tombstone, we would be more famous," he said.

Another trouble with the Nebraska Panhandle is that there aren't enough Old West characters, such as Wyatt Earp. Indeed, the most famous incident in the history of western Nebraska is the killing of famed Sioux warrior Crazy Horse. The slaying of the victor of the Battle of Little Big Horn, where Gen. George Custer met his demise, happened at Fort Robinson, an Old West military encampment that started in the 1870s.

Sitting on a horse-drawn wagon and riding around the grounds of Fort Robinson with the director of the state park, I was surprised when he showed me where the killing happened.

"It was not our finest hour," he said with a frown and then moved on to talk about something else.

The story I subsequently learned was that Crazy Horse had been taken into custody at Fort Robinson because the military feared he was going to start another Indian rebellion. While in custody he was bayoneted by a military guard. Afterward, his family claimed the body, and where he is buried is still a mystery.

Today Fort Robinson is a state park with the barracks and officer quarters converted into accommodations. It's a big place that includes 22,000 acres on the Pine Ridge, a museum and plenty of activities such as hiking, swimming and even a playhouse.

I did two terrific activities there: a horseback ride into the hilly grasslands surrounding the park and a quest to find the bighorn sheep that roam the high buttes overlooking Fort Robinson.

And about those picturesque but rugged buttes: A tribe of Cheyenne who had been brought to Fort Robinson were ordered back to the reservation. When the Cheyenne, led by Dull Knife, refused to return to the reservation, the soldiers incarcerated them and tried starving them into submission. But on the night of Jan. 3, 1879, they escaped by using guns they had previously hidden. The soldiers tracked many of them down, but 38 escaped into the buttes.

Later I was sitting with a group in the back of four-wheel-drive pickups meandering over a narrow, mountainous dirt road to the apex of one of the buttes. Once we finished the dusty climb to higher elevations we got out and strolled to the top of a butte that looked out across miles and miles of rolling countryside. And there below us on a sloping ridge were four bighorn sheep.

These were eradicated in Nebraska by the turn of the 20th century and had to be reintroduced. Today they number in the low hundreds. The bighorns are wanderers, and the day I was there some Nebraska wildlife rangers had to travel over to Wyoming because a couple of bighorns had meandered too far west and were a concern to domestic sheep-herders.

We stayed for about 30 minutes watching the sheep and climbing atop the buttes before heading back to the fort. On the trail down we spotted even more bighorns and a few antelope.

If wild animals, horseback-riding and Indian wars aren't enough to evoke the Wild West, here's another historical nugget. The Nebraska Panhandle was the Wild West before there ever was a Wild West because it was the pathway for the wagon trains that headed to California starting in early 1840s. Pioneers seeking a new life in the West would cross the Mississippi River and travel over the rolling grasslands of Nebraska. Then the landscape would change with the appearance of canyons, buttes, hoodoos and rock monuments, all of which told the travelers they were headed in the right direction. Not far ahead were the Rocky Mountains.

Travelers who come to western Nebraska still visit these landmarks to experience the highlights of the Oregon Trail, and I was no different. I first visited Windlass Hill and Ash Hollow State Historical Park. One of the earliest wagon train routes came through this area, but it's a bit of steep going, which made this part of the journey difficult for the wagon masters. It is still possible to see swales in the side of Windlass Hill where wagons came down, and there's a good walking path.

Other sites were Courthouse and Jail rocks, massive rock formations that the pioneers sought as landmarks of the Oregon Trail. The turnoff is on State Road 81. Chimney Rock National Historic Site is perhaps the most famous landmark along the Oregon Trail because it could be seen for miles. There's a museum and reception center on the site.

Scotts Bluff National Monument is the most majestic of the trail landmarks, and it is accessible. A two-lane road winds up from the visitor center to the top of the bluff. There's also a walking trail of 1.6 miles. Rangers in period costume tell the story of the Oregon Trail pioneers.

The Nebraska Panhandle is a good place to start exploring the Old West. Exploring is much easier today than it was in the mid-1800s. Back then travelers had to find Chimney Rock; today they can just check their GPS.

In Sidney I stayed at the Best Western Plus Sidney Lodge, www.bestwesternnebraska.com, and in Gering/Scottsbluff at the Monument Inn and Suites, www.monumentinnsuites.com. For uniquely Nebraska places to stay, there are 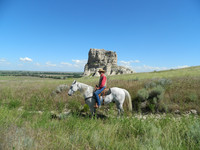 A cowboy poses before Jail rock formation near the Oregon Trail in the Nebraska Panhandle. Photo courtesy of Steve Bergsman.

Hikers approach a canyon in the Oglala National Grasslands in the Nebraska Panhandle. Photo courtesy of Steve Bergsman.