A Ride Through History at the Western Railway Museum

My husband and I boarded the old interurban car at Rio Vista Junction, an actual railroad stop on the Sacramento Northern from 1923 to 1940. Today it is the home to the Western Railway Museum near Fairfield in Northern California.

Our ride, "to experience California as it was 100 years ago on an electrically powered train trip," would last an hour and carry us south 10 miles past Garfield Station, an important stop for ranchers and farmers, and the Shiloh Church, built in 1876 after a devastating fire destroyed the original structure. Farther south we would pass a ranching site at Gum Grove and end at Pantano (Spanish for "marsh"), where everyone would climb out, stretch their legs and read the local signs displaying information about the surrounding country. We would then reboard, flip our seats over and settle in for the 30-minute ride back to the museum site and car barns.

This is a busy place when school is out, but coming in midweek and in the spring or fall means attendance will be light. We were able to spread out and move side to side to view the passing scenery of Black Angus cattle grazing among 800 or so wind turbines. It seemed an incredible juxtaposition of the old and new, traditional agriculture mixed in with cutting-edge energy production in what are called the Montezuma Hills.

The interurban car itself is a magnificent example of how restoration can bring back a more graceful era. Our bright-red single car was built in St. Louis in 1903 by the American Car Co. for the Peninsular Railway Co. It has an all-wood interior that looks like polished oak, restored green Naugahyde seats that accommodate two people on each side of a center aisle (or four seats across) and beveled, etched glass windows on top.

The lower windows can be opened and slid down into a compact compartment constructed just for that purpose. Brightly polished brass handles attached to each seat along the aisle sides help passengers keep their balance when the car is moving and aid them in flipping the seats back and forth so they can always ride facing forward.

Glittering light bulbs hang down from the ceiling. These were manufactured in the Soviet Union because they are no longer made in the United States.

When we rolled out at 12:30 p.m., our conductor, Fred Codoni, a volunteer from Fairfax, Calif., informed us that we would be stopping at all railroad crossings. Even though the law says trains have the right of way, the Western Railway prefers to stop for the sake of safety.

Shake, rattle and roll, chug, chug, chug, we moved slowly down the standard-gauge rails. Our car contained two sections, one of which was on old smoking area for gentlemen of a bygone era. A whistle blew with two medium-long blasts, a short one and then a long one. Everyone in the vicinity would be aware we were on our way.

The conductor and motorman on board were dressed in spiffy black suits with gold buttons, white shirts, black ties and official black railroad caps decorated with gold braid. They kept us entertained with stories about places we were seeing and other local lore.

Our trip lasted from Rio Vista Junction to Garfield Station, past the Shiloh Church and Gum Grove to Pantano. On the return trip we passed South Park Junction and a collection of old railroad equipment parked on an adjoining track. We arrived back exactly one hour after we left the car barn.

Our fun ride was now followed by a tour of car barns filled with old electric cars in a variety of conditions, some waiting for repairs and restoration. The majority of the stock had run in California, but we also saw some cars from Melbourne, Australia (Hop aboard "Mate!") and Indiana.

There was a car that had been used in Cedar Rapids and Iowa City, Iowa, and one from Blackpool, England, a resort on the Irish Sea. One car operated in Utah to bring people from Salt Lake City to the Saltair Pavilion on the Great Salt Lake.

A stapled 24-page booklet called "Self-Guiding Car Barn Tour: A Project of the Bay Area Electric Railroad Association" can be borrowed or purchased at the gift shop. It contains photos, drawings and descriptions of most all the rolling stock, around 30 to 35 cars on exhibit.

A membership flyer describes how the Western Railway Museum happened to be founded:

"In 1946, a group of individuals learned that the old Oakland streetcar they had chartered for a day's outing was to be scrapped within a week. They immediately dug into their wallets and gathered enough money to buy the car right there on the spot. In this spirit of philanthropy and historic preservation the Bay Area Electric Railroad Association, or BAERA, was formed to foster interest in streetcar, interurban and electric railroad operations, and to preserve these rapidly vanishing pieces of electric railway equipment.

"In the years that followed, dozens of trains were collected, and the need for a permanent site grew. Rio Vista Junction in Solano County, an actual stop on the Sacramento Northern main line, was selected as the museum site in 1960, and we slowly began to transform 22 vacant acres into a living history museum."

A few years ago a member of the organization died and left a substantial sum to build a new car barn. The Charlie Johnson Memorial Carhouse is now full of fascinating rolling stock that can be viewed by the public.

Besides the museum's 22 acres, there are 22 miles of railroad lines. Currently 5.5 miles of the line are in operation.

The museum also contains extensive railroad exhibits that include transportation in Solano County, the Key System in the East Bay (San Francisco Bay Area) and a large model railroad on loan from the Rio Vista Model Club. Visitors will also find a well-stocked museum store, archives and the F.M. Smith Memorial Library.

The Western Railway Museum is located at 5848 State Highway 12, (between Fairfield and Rio Vista), Suisun City, CA 94585-9641. Call 707-374-2978 or visit www.wrm.org. Annual events include a Pumpkin Patch Festival, this year from Oct.12-27, with trains running every 30 minutes beginning at 10 a.m. The last train departs at 4 p.m. Special runs are also conducted in the spring to view colorful native wildflowers. 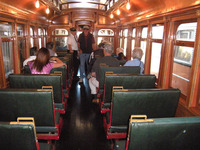 Visitors to Northern California enjoy traveling by an interurban railway car built in St. Louis in 1903 by the American Car Co. for the Peninsular Railway. Photo courtesy of Patricia Arrigoni. 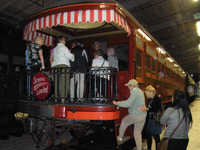 Visitors to Northern California climb aboard a steel observation car built in 1916 by the Niles Car Co. in Niles, Ohio, to run on the Salt Lake and Utah Railroad. Photo courtesy of Patricia Arrigoni.