While exploring London and Winchester, England's ancient capital an hour's train ride south of the city, I wandered onto the "eaten" path and got a taste of the local flavors — in more ways than one.

On a walking food tour in London's vibrant East End, Zahra, our Eating Europe guide and East Ender, welcomed our small group to "...the best food in all of London!" Here we noshed at best-kept-secret eateries and learned local lore, the mission of Eating Europe tours. Like the story of the earliest immigrants who had settled east of London's Roman and medieval walls — French Huguenots, Irish weavers, Jews from Poland and the Netherlands, Bangladeshi and England's rural poor — who left behind a tapestry of trades, cultures and cuisines.

"The most recent arrivals are the hipsters," said Zahra, "...recognized by our tight jeans!" Their energy, music and street art revived this once poverty-stricken neighborhood.

Breaking bread with strangers became a heavenly seven-course meal — from comfort dishes such as St. John's bacon sandwiches, bread and butter pudding at the English Restaurant and cod and chips at Poppie's to British and French cheeses at the House of Androuet. Then we had British ale and cider at the Pride of Spitalfields neighborhood pub; Aladin, one of London's oldest curry houses visited by HRH Prince Charles; and Beigal Bagel's cured-beef sandwich — all finished with salted caramel tarts and a pot of tea at Pizza East.

In the West End, I crossed the threshold into Dukes Bar keen to elevate my martini-neophyte taste buds with "the best martini in London" that stirred my imagination beyond the cocktail. Author Ian Fleming was a regular here while he penned "Casino Royale" in 1953, his first James Bond novel in which Agent 007 invented the Vesper (vodka) martini and the phrase, "shaken, not stirred," was coined.

The intimate bar is inside Dukes London hotel in a hidden medieval courtyard near Buckingham Palace. The late-19th-century building was originally the London Chambers for sons of aristocracy; then in 1908 it morphed into a discreet hotel, hence its name.

Alessandro Palazzi, virtuoso and Duke's Bar manager, could have been 007's bartender. Tableside, on the same trolley that rolled to Fleming's corner table, Palazzi rinsed my chilled martini glass with an English dry vermouth he co-created, followed with a slow pour of gin and finished with his signature ingredient, fragrant oil of Meyer lemon — "...organic, from the Amalfi Coast," he emphasized. No need for ice because the spirits come from the freezer.

My classic martini was delicious. And strong.

Hungry for the countryside, I hopped the train to Winchester in Hampshire County, home to Winchester Cathedral, ex-Londoners and my base for exploring this gastronomic paradise. As I walked from the train station to my hotel on High Street, a colorful scene unfolded: Winchester's famous farmers market, the U.K.'s largest that attracts up to 5,000 visitors.

From local honey to scallops and squid, fresh produce to goat meat and goat cheese, baked goods, water buffalo burgers and street performers, the atmosphere was nothing short of festive. "Saffron paella will be ready at 11:30!" the gregarious vendor announced.

Water buffalo in the south of England? Indeed, the U.K.'s largest herd grazes away at Laverstoke Park Farm founded by Jody Scheckter, 1979 Formula 1 World Champion motor-racing driver. From the fast lane to the farm, Scheckter used his technical acumen to grow the healthiest food for his family — a personal quest that became a serious study in soils management. Today his analytic chemistry lab is Europe's only licensed Soil Food Web Laboratory.

Happy buffalo feast on more than 30 herbs, grasses and clovers and in return produce nutritious low-fat milk used for making award-winning buffalo mozzarella and ice cream. On a special tour, I watched how mozzarella, Italy's delicious invention, is made.

Next door to the farm the revival of 300-year-old Laverstoke Mill — acclaimed conservation project, museum and extraordinary home of Bombay Sapphire gin distillery— was an enchanting find. On the banks of the River Test, the mill once made paper for bank notes for British colonies, including India, Jewel of the British Empire. And who knew the invention of gin and tonic in India (believed to ward off malaria) inspired the image of Queen Victoria, Empress of India, on every bottle of Bombay gin?

A tour with Sam Carter, Bombay Sapphire's senior ambassador who conducts master classes for the world's top bartenders, was a crash course on the U.K.'s favorite spirit.

"Gin must be made with ethanol of agricultural origin, water and flavored with botanicals," he said, "...but must be juniper-dominant," true to the original 1761 gin recipe of Thomas Dakin. And getting up close to the Dakin stills was a rite of passage as I learned how the magic of vapor infusion extracts the bright flavors of juniper, angelica, almonds, coriander, lemon peel, cubeb berries, orris, licorice, grains of paradise and cassia bark — all grown onsite in the tropical climes of the Glass Houses.

Inside the interactive Botanical Dry Room, visitors sniff each botanical and pick their favorites — crafting a custom gin cocktail to imbibe at the distillery's very own Mill Bar — one delightful sip at a time. 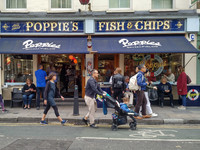 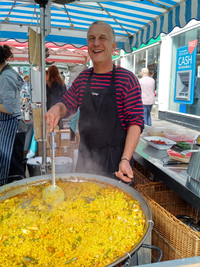 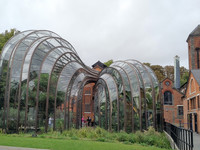