Try Bird-Watching While You're Staying at Home

Joann and Bill Jessen excitedly train their binoculars on a stretch of salt marsh that is alive with the sights and sounds of hawks and falcons that are resting after pursuing songbirds for their dinner. The 24 species of birds that John Beatty spots during the first few minutes of daylight may seem like a lot, but it's no great feat for where he is.

These folks are among the many Americans — estimates range as high as 60 million — who get their kicks from observing our fine feathered friends going about their daily tasks. Some are stay-at-home birders, as they're called, who enjoy observing high fliers that venture into their backyard or neighborhood.

Others are known as away-from-home aficionados. They're willing to take to foot, car or in normal times even airplanes to seek out a rare specimen that has been seen in another part of the state or country or perhaps elsewhere in the world. They're likely to maintain a list of the species they have seen, with details about the date and location of each sighting.

If you have time on your hands during this stay-at-home period, you might consider trying the excitement, joy and learning experience that training your eyes — perhaps through a pair of binoculars — on visitors to your yard or neighborhood can provide. Many serious bird-watchers got their start as casual observers who don't stray far from where they live.

As the list of sightings grows, their newly acquired knowledge often extends beyond facts about the birds themselves to the places from which they came and are going. In the case of migratory fowl, that can include far-flung states or even countries.

The birds of prey that are holding the Jessens' attention are making their annual journey south, so the couple are able to observe part of the trip that took them near their home in Massachusetts.

Beatty didn't have to travel far from his home in Galveston, Texas, to enjoy a treasure-trove of sightings. That area is known for the diversity of both its resident and fly-by types. White pelicans float lazily in bay waters, reddish egrets dance and prance in a frenzy of activity and roseate spoonbills display their unusual beaks, which resemble elongated pingpong paddles.

Practiced birders know — and newcomers soon learn — that the weather can play a role in how successful a wait-and-watch quest can be. If the search is good during pleasant weather, it can become phenomenal when conditions deteriorate. When rain and storms force birds to the ground, people can enjoy swarms that are seeking shelter in their own yards.

Not surprisingly, where one lives and the time of year play a big role in the kinds of birds likely to appear. The Adirondack wilderness in New York state offers a patchwork of habitats with appeal to a variety of birdlife. As a result, more than 250 species have been observed in the area.

In warm weather colorful wood warblers and loons are common. Fall is spectacular, with a major migration of hawks taking place against a backdrop of dramatic foliage. In winter, avian residents with colorful names such as rough-legged hawks and saw-whet owls brave the cold weather.

In December 1818 more than 500 men took part in an organized hunting expedition in the present-day Cleveland suburb of Hinkley, Ohio. Their goal was to rid the township of bears, wolves and other wild animals that were considered to be pests or threats to crops and livestock.

The following spring, buzzards appeared to feast on remains of animals that were left to rot. Flocks of descendants of those original visitors continue to return each year, reportedly on March 15, and their arrival is marked by an annual "Buzzard Day" celebration.

Numerous places for sightings are available to residents of and visitors to Wisconsin. Burnett County provides a welcome home for nesting herons, double-crested cormorants and sharp-tailed grouse. Wisconsin Point at the western end of Lake Superior attracts rarities such as the imaginatively named piping plover, parasitic jaeger and Cassin's kingbird.

Grand Island, Nebraska, located in the center of the United States, becomes the epicenter each spring of a visitation by an estimated half-million sandhill cranes during their annual migration. The birds, which represent about 80 percent of the world's population of that species, spend several weeks feeding and resting.

Then there are those unusual occasions when birds show up at places where they're not supposed to be. When a wood sandpiper took refuge in marshes near Rye, New York, hundreds of people flocked to the area to watch and marvel. That's because the visitor is known to breed in Scandinavia and Russia, and to spend winters in southern Africa and Australia.

Knowledgeable birders speculated that the tringa glareola, one of some 40 species of sandpipers, had been blown across the Atlantic Ocean by a severe storm. Its loss was the excited watchers' gain.

For more spots that have good bird-watching: www.birdwatchingdaily.com

Texas is a good place for bird-watchers to find great white pelicans. Photo courtesy of Henketv/Dreamstime.com. 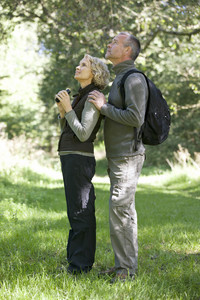 While travel is not an option, bird-watchers can look for many species near their homes. Photo courtesy of Flair Images/Dreamstime.com. 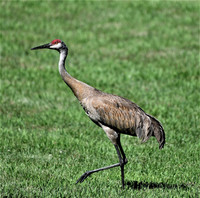 Texas is a good place for bird-watchers to find great white pelicans. Photo courtesy of Henketv/Dreamstime.com.