Wildlife and Scenery Are Big in Alaska

When I began planning a visit to Alaska, three words came to mind: "big," which many things in the 49th state are; "scenery," some of the most magnificent anywhere; and "wildlife," which is available in abundance.

It didn't take long for me to experience all of those observations. Alaska is big — twice as large as Texas with a longer coastline than all of the other states combined. Mount McKinley is the tallest peak in North America, Denali National Park is larger than Massachusetts and the state contains more than two-thirds of the country's total national park acreage.

Not surprisingly, it was the breathtaking scenery which first caught my eye. Row after row of snow-covered mountain peaks stretch to the horizon, including many of the highest in the country. Rivers meander through deep valleys that were gouged out eons ago by advancing glaciers.

I discovered a choice of ways to enjoy one of Mother Nature's most splendid settings. Whether flying over, driving through, walking in or viewing from the deck of a ship, I found it challenging to find words that adequately describe the sheer drama of the scenery.

Opportunities to observe wildlife in its natural setting, often close at hand, are everywhere. My itinerary included exploration of Denali National Park and Preserve, a world of Arctic tundra and soaring mountains. While keeping my eyes peeled for sightings of the "Big Five" Alaska mammals — grizzly bear, caribou, moose, wolves and dall sheep — this vast wilderness also is home to a menagerie of other creatures.

Those who don't make it to Denali need not despair. Towns in Alaska are never far from the wilderness, and in many places they overlap. Parks often begin within city limits and extend to nearby backcountry landscapes. Moose, bear and other critters looking for food sometimes wander into urban settings, eliciting little surprise from two-legged residents who are used to such intrusions.

Equally as intriguing are towns in Alaska, each with its unique history and stories. Gold was responsible for the birth of Juneau, the state capital, when it was discovered there in 1880, about 15 years before the famous Klondike Gold Rush began in Canada's Yukon region. I relived those heady days during visits to several mining sites and by trying my hand at panning, which, while fun, did not do much to fill my wallet.

Another claim to fame is the proximity to Juneau of the most readily accessible of the 10,000 or so glaciers in Alaska, the Mendenhall. Looming above the suburbs and

bearing the typical bluish-white glacial hue, it flows about 12 miles from the ice field where it originates.

At the lake where the glacier ends large chunks dramatically break off to become icebergs. I was fortunate enough to observe a "calving," as that process is called, but was saddened to hear how far the glacier has retreated in recent years.

The town of Ketchikan occupies the site where Tlingit natives once set up summer fishing camps near salmon-rich waters. Today it lays claim to the title "Salmon Capital of the World." It also boasts the largest display anywhere of standing totem poles in three formal collections as well as in front of private homes.

Along with Alaska's breathtaking natural beauty, colorful history and constant opportunities to interact with wildlife, its people also left an indelible impression. One reason for that is the respect accorded the cultures of the native people and the extent to which they have been woven into the fabric of life.

Many Alaskans use the word "Denali," Athabascan Indian for "The Great One," as their name for Mount McKinley. A number of locals wear T-shirts bearing representations of totem poles and other traditional images. And I was moved by the pride with which an Aleut guide at the Alaska Native Heritage Center described how men from his village still hunt for whales from kayaks and claimed that the baskets woven by women are among the finest in the world.

Non-native residents manifest pride and independence in their own ways. This is evident in the motto on state license plates, "Alaska — the Last Frontier," and on a sign I spotted in a small town claiming, "Where the road ends and life begins." It was voiced by Elizabeth Arnett, a 40-something nurse who said she came to Alaska 15 years ago, then added, "It takes an independent spirit to live this far from family and friends."

This spirit was expressed more succinctly by a shopkeeper in Ketchikan. When I inquired why she had moved to the state, she replied, "Adventure." 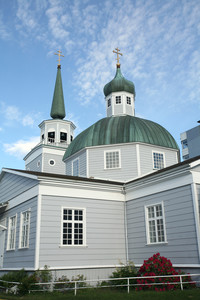 The onion-shaped domes of St. Michael's Church in Sitka, Alaska, are reminders of the early 19th century, when Russia attempted to settle the area before selling it to the United States. Photo courtesy of Brian Adams, Alaska Travel Industry Association.