Myanmar, "The Golden Country," with its beautiful golden pagodas, Buddha statues and spires, never disappoints. The British referred to Burma, now called Myanmar, as the "Back of the Beyond" — a place off the beaten path and not spoiled by modernity. While that does describe Myanmar, the hotels, cruises, restaurants and hospitality rival any well-developed tourist destination.

The "Irrawaddy" is an English corruption of Ayerawaddy, which some scholars translate as "river that brings blessings to the people." For the people of Myanmar it truly is a blessing: It is where they wash, what they drink, how they travel, where they fish, and the annual flooding is essential to food production. The river begins in the Himalayas and continues for 1,300 miles past snow-covered mountains, jungles and dry flatland to the Andaman Sea.

Reading Rudyard Kipling's "The Road to Mandalay" and George Orwell's "Burmese Days" ignited my desire to explore Myanmar and travel the Ayerawaddy River, so recently my husband and I cruised from Mandalay to Bagan on the RV Kindat.

The itinerary was filled with historical sites. In Mandalay, for example, I gazed in wonder at the Buddha in Mahamuni Pagoda, where the statue has increased many times its original size due the addition of gold-leaf tributes.

Whenever possible we took advantage of the various modes of transportation to visit these sites. Near Mandalay, while others walked, my husband and I bounced along in the back of an oxcart from the river jetty to the mammoth Mingun Bell (the world's largest uncracked bell), a mammoth unfinished stupa, and the beautiful white Myatheindan Pagoda. What fun!

One morning I gazed in wonder at 45 Buddha statues sitting in an arc at Sagaing's Umin Thouzeh Pagoda. Another afternoon a colorful horse-drawn cart took us through the countryside to the magnificent teak Bagaya Monastery. That evening was magical. We watched the ruby-red sun set behind U Bein, the world's longest teak bridge, from a rowboat. Some of the RV Kindat crew brought along and served us sunset cocktails — wonderful.

In Pakokku we climbed in the back of a tuk-tuk to visit a traditional market where our guide, Mr. Ko Ko, bought ingredients for Myanmar Ginger Salad. That afternoon the chef showed us how to make the traditional dish. It was just one of several cultural onboard presentations. Mr. Ko Ko also demonstrated how to make and apply "thanaka" (the pale yellow makeup commonly worn in Myanmar) and how to wear a "longyi" (the wraparound garment worn by men and women). One evening we watched a traditional puppet show, and another night we enjoyed a dance presentation.

In Myanmar products are still made in the traditional way, but that will change in a couple of years when they will be made in factories. There will be people demonstrating their crafts for tourists, however.

Here it takes a village to make terra-cotta pots. One of the stops made by the Pandaw Kindat was at Yandabo, a small pottery-making village between Bagan and Mandalay. I was able to watch the entire pot-making process from taking the clay from the river to shaping it to decorating it to drying it just the way they have for generations. There is division of labor; each person has a special area of expertise. The pots are mainly used for water and keep it refreshingly cool. This is a welcome treat in a village where the temperature can reach 90 degrees and there is no electricity.

The village is also historically famous for the signing of the Yandabo Treaty by both the Burmese and British kings at the end of the first Anglo-Burmese War. Before leaving I accepted a delicious cup of sweet, milky Burmese tea from the friendly villagers.

As we walked in Myat Paya we heard dull thudding sounds echoing through the streets. It was the gold pounders, who impressed me with their strength and stamina. Using a sledgehammer, they pound layers of gold into extremely thin gold foil that is placed on pagodas and statues of Buddha by worshippers. Two hundred pieces of gold leaf are placed between pieces of specially made bamboo paper and wrapped for pounding. At the end of five hours of pounding, ladies carefully cut them into 1,200 pieces of incredibly thin gold leaf.

The workday is from sunrise to sunset with scheduled breaks. A half coconut with a small hole in the bottom floats in a bucket of water. It slowly fills with water and finally sinks, signaling break time.

We visited several workshops, including one where young girls were weaving material on a traditional foot-and-hand-operated loom. We also saw craftsmen making teak carvings, silver items, flip-flops and lacquer ware. I had no idea that lacquer comes from a tree similar to a rubber tree or the many steps necessary to make a piece of lacquer ware.

We saved the best for last — Bagan, the pride of Myanmar. The ancient city was built between the 11th and 13th centuries and was the capital of the first Burmese empire. There are more than 3,000 temples, each one different but all amazing. Ananda Temple, with four golden standing Buddhas, is especially impressive. The highlight was watching the sunset from the top of Buledi pagoda. Bagan is still a place of worship, unlike other temples such as Angkor Wat.

We had plenty of time between tours to relax and marvel at the ever-changing scenes along the Ayerawaddy River. From the chair outside my cabin I never tired of watching people working, doing the laundry, bathing and going about their daily business. The river never disappoints.

Visit www.pandaw.com to see the great trips this company offers in Myanmar and elsewhere. Myanmar is a safe, friendly country, and getting a visa is easy at www.evisa.moip.gov.mm. It costs $50 and is good for 28 days. Many places now take credit cards, but when using U.S. dollars they need to be pristine. 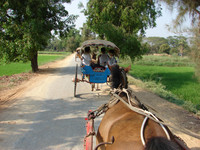 The modes of travel in Myanmar include oxcarts and horse-and-buggy rides. Photo courtesy of Sandra Scott. 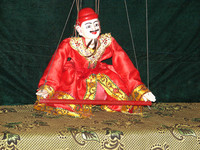 Puppet shows are a traditional form of entertainment in Myanmar. Photo courtesy of Sandra Scott. 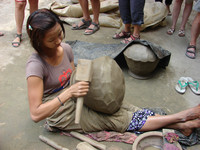 A young woman in the village of Yandabo begins to fashion a pot from clay taken from the river. Photo courtesy of Sandra Scott.