From Travesty to Tourism in Vieques, Puerto Rico

Picture this: From 1948 to 1999, the U.S. Department of the Navy actually bombed its own country. That may be a slight exaggeration, but here's what really happened: From the early 1940s, the U.S. military used a good part of Vieques, Puerto Rico, a small island off the coast, as a training ground for ship-to-shore gunfire, air-to-ground bombing and Marine amphibious landings. Up until April 1999 about 120 days a year were devoted to integrated land-sea-air live-fire exercises (i.e., exercises with explosive ammunition) by U.S. aircraft carrier and amphibious-ready groups preparing to deploy overseas.

Although residents had strongly objected for decades, it was not until a Puerto Rican security guard was accidentally killed by an errant bomb in April 1999 that the opposition began in earnest, garnering support from the mainland, including political leaders and celebrities from around the world. As of May 2003 all military operations were suspended, leaving the island isolated and decimated, but ironically with much of its undeveloped natural beauty outside the military compounds intact. And therein lies the rub.

Now picture this: From bomb site to beach resort — and therein lies the story. While the Navy has been busy these past several years cleaning up the parts of the island it destroyed, the rest of the island is gearing up — albeit slowly — to join the rest of Puerto Rico as a Caribbean tourist destination.

The island still has no traffic light, no movie theater, no American fast-food restaurants and no nightlife. Still, there are now seven more car-rental companies than during the Navy occupation (when there was one) as well as a couple of dive operations, horseback-riding stables, sailing options and several tour companies — along with a W Hotel. That's got to mean something. But although the 157-room property is a tourist magnet, the next closest property in size is the 30-room Brik Hotel, which hasn't yet opened. The rest are guesthouses. The island is not exactly leap-frogging into tourism territory.

But Vieques is not without its unique attractions, two of which are its wild horses, descendants of those brought over by the Spanish conquistadores in the 1500s, and its Bioluminescent Bay, the most glowing — literally — of the five bio-bays that exist in the world. Caveats to come.

First, the horses. They have the run of the island, so the hour's drive from one end of the island to the other can take a lot longer, depending upon how many you run into — using the term loosely. We even watched a pool boy at the upscale W chase a horse, apparently to deter him from taking a dip in the resort pool. We followed close behind, only to find him snacking on the property lawn and posing just long enough for us to take his picture. As I turned around, I almost bumped into a sign reading "Caution: Wild Horses Poop." And indeed he had.

And, oh yes, the bio-bay. First some background. Mosquito Bay, considered the brightest bio-bay in the world, is home to half-plant, half-animal organisms at a rate of 720,000 per gallon that emit flashes of bluish-green light when agitated, preferably under a moonless night when the effect is most dramatic. And dramatic it is as the entire bay explodes beneath you in a fireworks display unlike any you've ever seen before.

But not for us. Because of some ill will of nature, blamed at the time on excessive rain and cool temperatures (for Puerto Rico), the bay was mostly dark. Still, just the stars alone were worth the trip — almost. With two people to a kayak, the darkness all pervasive, the quiet almost surreal, I felt like I was floating in a private, otherworldly lagoon, hampered only by the knowledge that I was experiencing just the slightest remnants of what should have been an amazing Technicolor adventure. Putting my hand in the water released a flurry of gold sparkles reminiscent of an abundance of Fourth of July sparklers beneath my fingers, as though a vast array of shooting stars from the sky had fallen into the water. This was just a fraction of what it should be when a blue-green haze dominates the water and the fish swimming around trigger a reaction that brings the entire bay alive.

I had come to Vieques with a preconceived notion that because of all the destruction that occurred, the resurrection of Vieques as a tourist destination would revolve around conservation, sustainability and decreased environmental impact. Not so — or at least not yet. Ironically, although tourism has indeed increased, there does not seem to be any island-wide plan to deal with it in any coordinated "green" fashion.

There are fewer than 10,000 people on Vieques, and everyone seems to know everyone else. Locals have a fierce pride in their island and a universal disappointment that so much has been planned or promised and so little has been done. There is a wistfulness in their eyes as they talk about what the island so desperately needs in terms of education, health-care provisions, infrastructure, environmental protections and tourism services.

They are also in conflict over how much development they want. More and more foreigners — which is how they allude to Americans, despite their shared U.S. citizenship — are invading their quiet, undeveloped, pristine locale with its sparkling isolated beaches to open restaurants and other tourist establishments. They are unsure what the future will bring — and whether it will be positive. Vieques may or may not be on the verge of a tourist boom, and it's questionable exactly whom all this new development will actually benefit.

Everyone on Vieques has a story, and no one comes come to Vieques by accident. With Caribbean island tourism not yet a reality, the question most often asked by one visitor to the next is, "What brought YOU to Vieques?" And the answer is almost always a friend, a relative or a colleague. It is never advertising or a travel agent. And while tour companies, diving operations and sailing options have doubled in the last five years, infrastructure has lagged. Although many of the main roads are easily traversable, there are some leading to recommended beaches that boast car-eating potholes ahead and jeep-attacking tree branches on all sides, and are bumpy to boot. At some point this will change.

Vieques is a visual delight, a portrait in green, blue and many shades of brown if you count the horses, and you have to because they're everywhere. It is undisturbed by development — but that will not always be the case. My recommendation is to go now while it is still unspoiled by anything other than the Navy and before it becomes just another overdeveloped Caribbean island, possibly losing the unique character that is so very much Viequesian.

For information about visiting Vieques, call 800-866-7827 or visit www.seepuertorico.com/en/destinations/culebra-and-vieques.

Wild horses descended from those brought over by the Spanish conquistadores in the 1500s are a high point of a visit to the Puerto Rican island of Vieques. Photo courtesy of Fyllis Hockman. 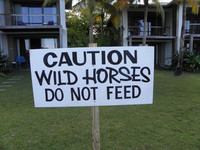 Wild horses descended from those brought by the Spanish conquistadores in the 1500s are protected on the island of Vieques in Puerto Rico. Photo courtesy of Fyllis Hockman.