Which California Theme Park Is Right for Your Family?

Legoland in Carlsbad, north of San Diego, is celebrating its 20th birthday this year and is most genius for children ages 2 to 12. Created from more than 60 million Lego bricks, the park features more than 60 rides. Older kids will enjoy the water park, and with the family-friendly aquarium next door, it's worth visiting both parks and staying overnight.

The new submarine ride, Deep Sea Adventure, features eight submarines, which move around a 300,000-gallon aquarium populated with sharks, rays and tropical fish. The fun starts in the line, where children are invited to make their own Lego sea creatures.

At the original hotel situated at the park's main entrance, you can choose themed rooms — such as Pirate, Adventure or Lego Friends — and enjoy a buffet breakfast at the restaurant. Quintessentially Californian is the nearby Cape Rey Hotel, which is a Hilton resort and Legoland partner. Located across the street from the beach just 2 miles from the park, Cape Rey has a spa, oceanfront restaurant and surf shop.

Universal Studios Hollywood is a smaller park, but it's especially fun for a family with tweens and teens. The Wizarding World of Harry Potter features an impressive Hogwarts castle, the shops of Hogsmeade and the soaring, state-of-the-art Harry Potter and the Forbidden Journey thrill ride. Afterward, feast on butterbeer and fish and chips at Hog's Head Pub.

Jurassic World: The Ride is based on the hugely successful dinosaur franchise. Or go on the classic Universal Studio Tour, where you can see everything from the house from "Psycho" to King Kong and experience "Fast and Furious" special effects. You can tour Universal in a day — including the fireworks.

The first theme park of its kind, Disneyland is a bucket-list experience for every family, but it can get expensive once you add on VIP passes, snacks, drinks and gifts. Sleep outside of the park for the best value, pack your body weight in snacks and travel off-peak. We stayed at the Courtyard Anaheim Hotel, which is a five-minute walk from the park, and watched the fireworks from our balcony.

Disney is perfect for toddlers, with rides that have been specially crafted to excite them. They can still meet iconic characters such as Mickey Mouse and Snow White, but the park has moved with the times. This year, they are opening Star Wars: Galaxy's Edge, featuring an interactive ride, Millennium Falcon: Smugglers Run, and later this year ,Rise of the Resistance, an epic battle against the First Order.

The first Six Flags opened in Texas in 1961, and the park's full name, Six Flags Over Texas, comes from the six different countries that have ruled over Texas since the 1500s. The four Six Flags experiences to enjoy in California are Six Flags Discovery Kingdom and Hurricane Harbor (the water park) in San Francisco and Six Flags Magic Mountain and Hurricane Harbor in Los Angeles. This is roller coaster heaven. Rides such as Viper and Scream are good value for teenagers and thrill-seekers, while the attached water park offers body slides and wave pools.

They claim to have more family-friendly rides than any other theme park in SoCal, including Elmer's Weather Balloons, the Merrie Melodies Carousel and Pepe Le Pew's Tea Party. They also offer Parent Swap 101, so if you're visiting the park with a child who's not tall enough to ride the big coasters, they will let your party wait together for rides, and when it's time to board, one adult will board and ride while the other waits with the child. When the train returns to the station, the parents switch, letting both enjoy the ride while keeping the child safe.

Set on 57 acres in Buena Park, California, Knott's Berry Farm is the 12th-most-visited theme park in the United States. They originally grew boysenberries here, but now the excitement comes from rides such as GhostRider, one of the most famous wooden roller coasters in the world. The park has five distinct Western areas, including Indian Trails, which explores Native American heritage.

Camp Snoopy is home to the Peanuts gang and has 20 child-approved rides from which to choose. The park is famous for its delicious fried chicken at Mrs. Knott's Chicken Dinner Restaurant, which opened in 1934, with Mrs. Knott and her children serving the first customers.

While the San Diego Zoo isn't exactly a theme park, it's still a fantastic day out. There's lots of walking, which is challenging with strollers, but there are plenty of campsites nearby, meaning you can save a few bucks on accommodation. And the Ferris wheel on Santa Monica Pier provides a great view. Along with games and restaurants, it makes for an easily manageable outing. The unlimited ride wristband is good for all 12 rides.

Some tips for families on a budget: If you plan to do three or more of the major theme parks, consider a CityPASS package to save on admission fees (read the small print for some restrictions): www.citypass.com/southern-california. Bring empty water canisters and refill them at a fountain. Book a nearby hotel that includes breakfast. 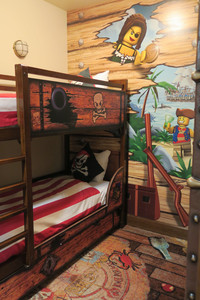 Themed rooms at the hotel at Legoland in Carlsbad, California, such as this one designed as a pirate ship, allow children to live their fantasies. Photo courtesy of Margot Black. 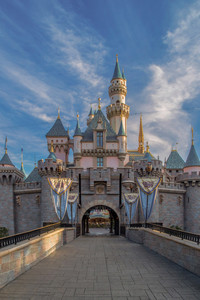