Memorable Meals From Around the World

By Fyllis Hockman and Victor Block

Enjoying our first dinner during a visit to Sicily, we turned to our guide and told him the meal was excellent. This being Sicily, his reply was not surprising.

"You can steal my money, but don't touch my food," Alessio remarked. Then he added, "If lunch or dinner doesn't have at least five courses, it's a snack."

Food plays an important role in the lifestyle of Italians. Portions often approach gargantuan in size, and growing, harvesting, cooking and eating hold a place of near reverence in their daily lives.

But that's not the only place. Of countless repasts we have enjoyed around the world, several stand out because of what they demonstrate about the locale and the people who live there. All linger in our memories, if no longer on our taste buds, because of what they taught us about the lifestyles of those who prepared and shared their local favorites.

Of the meals we enjoyed in Sicily, one that stands out was billed as "A Day in the Life of a Sicilian Family." Because family equals food in importance in Italy, a visit to a farm seemed appropriate. Alessio's instructions were clear: Relax, cook, set the table, sing, dance and be open to being part of the family despite the language barrier.

The farm's owners and their parents, plus assorted aunts and cousins, took part in teaching us the finer techniques of kneading bread and rolling pasta, which we eventually consumed with gusto. What made the meal even more memorable was the connection with the extended family who helped us create it. One heartwarming story told by the family matriarch described the first kiss with her husband-to-be on the property at the age of 12.

From Sicilian farmhouse to island inn provided a marked change in venue and recipes but was equally memorable. We're not accustomed to trussing up and skewering the night's main course — a practice not for the fainthearted — before it is spit-roasted on an open-air fire pit for eight hours. But so it is with the Wednesday night pig roast at the Hermitage Inn on the Caribbean island of Nevis.

Sitting in the Great Room awaiting its theatrical entrance, we couldn't help but reconnect with the plantation owners and their guests of yore who feasted on roasted pig and numerous local dishes more than 300 years ago. The sides included plantain and rabbit pie, barbecue chicken and curried chickpeas, fish in cream sauce and tomato salad, with a special shout-out to the customary Johnny Cakes.

Such elegant fare was replaced by a more traditional repast as we cooked our own meal at the Village Restaurant in Thit Ael Pin, a tiny town inhabited by farmers and fishermen in Myanmar (formerly known as Burma). It is home to the Danu people, one of 135 ethnic groups that are officially recognized by that country's government, each with its own customs, traditions and food preferences.

A chef presided, and we each had our own personal assistant who instructed and helped us to add the ingredients to the cooking pots. The nine-course luncheon began with vegetables tempura prepared in the local style, went on to steamed fish wrapped in cabbage leaves and tea-leaf salad and titillated our taste buds with a dessert of crispy fried banana with honey. The food was paired with glasses of Myanmar-produced wine, which we found to be surprisingly good.

As immersed in all things culinary as are the Italians, nowhere in the world is fine food approached with more reverence than in France. A barge trip along a narrow canal in the Burgundy area of that country epitomizes that tradition, with wine and food the focus of the trip.

Fresh breads and buttery croissants are brought on board each morning, still warm, from a nearby bakery. Lunch and dinner are exquisitely prepared and presented using products from local farmers markets that are hurried onboard to maintain freshness, accompanied by a selection of wines. The de rigueur plat de fromage, a choice of three different cheeses, is served up with as much reverence as the beverages.

Each bottle of wine is tenderly caressed as its characteristics are lovingly described prior to serving. Comparable homage is paid to the cheese. Once we returned home, we found it hard to look at a glass of wine or wedge of cheese without wanting to know its entire history.

Back on land, in a world far away, a famous chef visiting from New York City toiled in a Pennsylvania kitchen several days a week. The three meals a day were scrumptiously prepared, visually appealing, enormously filling and, oh, yes, delicious — not unusual for any fine restaurant. But when the calorie count for all three meals ranged from 1,200 to1,600 calories, including two daily snacks, the food took on new significance. We had come to the Deerfield Health Retreat and Spa in East Stroudsburg, Pennsylvania, for the exercise — with virtually round-the-clock options — but we stayed for the food.

After gallivanting and gourmet-dining around the world, we end with a tiny snack shack in the United States. The Pine Tree Frosty has been serving light bites and ice cream in the little western Maine town of Rangeley since 1964. We have a summer home there and are regulars at the modest establishment.

The setting alone — perched at the edge of a small lake that is the seasonal home for several dozen ducks and an occasional loon — is worth a visit. But the best lobster rolls in Maine, where that tasty treat is a traditional favorite, keep us coming back — and back again.

Visitors to the Caribbean island of Nevis select side dishes at a pig roast at the Hermitage Inn. Photo courtesy of Fyllis Hockman. 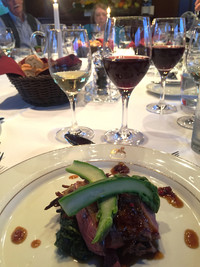 Food and wine take center stage during a barge trip along a narrow canal in the Burgundy area of France. Photo courtesy of French Country Waterways.

Visitors to the Caribbean island of Nevis select side dishes at a pig roast at the Hermitage Inn. Photo courtesy of Fyllis Hockman.