Anyone looking for a prime example of urban resurrection definitely needs to discover Krakow. Since the end of Poland's hellish half-century (from the 1939 start of World War II to the 1989 end of Communist rule) Krakow has been massively repaired and restored to the point that it is now one of Europe's most appealing destinations.

During medieval times, Krakow was Poland's capital, retaining that role until 1596, when the capital moved to Warsaw. A good place to start your exploration is in Kazimierz, formerly a separate city, founded by King Casimir III ("the Great") during the 14th century. He encouraged Jews to move to the new town, as they could still have access to the crown while living separately from Krakow's Christians.

Today, the former Jewish section is vibrant due to its restored cultural icons and fascinating dining scene. Now, you see a small remnant of the enclave that was once home to as many as 120 synagogues. Of the six that can be visited, the most intriguing include the Old, Temple and Remuh synagogues.

Rynek Glowny, Krakow's grandest square — and one of Europe's — dates back at least eight centuries. Covering some 10 acres, it throbs with life day and night. While masses flock here to do business, dine and drink, the square is also home to several must-sees for visitors. These include the 13th-century Gothic basilica of the Virgin Mary, home to a massive wooden altar carved by Veit Stoss between 1477 and 1489.

You'll also want to visit the impressively restored medieval cloth hall, which bisects the square. Once the heart of a thriving trading center, it fell into ruin following the move of the capital to Warsaw. What you see today is a reconstruction featuring an impressive collection of 18th- to 20th-century Polish paintings and a vast 64,000-square-foot underground historical museum. Here you can walk among foundations and streets that date back some 700 years.

Particularly fascinating are the displays re-creating the atmosphere of medieval Krakow. Here you can walk over glass ramps covering remnants of former structures and see merchant stalls, workshops, aqueducts and remains of burned settlements, some dating back to the 11th century. At the top of Rynek Glowny, look for the barbican, a fortified outpost that's a small remnant of Krakow's once-extensive city walls.

On another day, visit the restored factory of Oskar Schindler, made internationally famous by the 1993 film "Schindler's List." During World War II, Schindler — who was a member of the Nazi Party — saved thousands of Jews, whom he employed in his enamelware and armaments factory.

For nearly five years, the Germans allowed Schindler to operate with a staff of his choosing that included more than a thousand Jews. Without these jobs and the copious bribes of cash and luxury goods Schindler paid to Nazi officers, most, if not all, of these employees would have been killed.

Today, the factory is interspersed with a vast collection of wartime photographs, posters and memorabilia. This site is intensely popular and allows only a limited number of visitors to enter. Arrive early and expect to spend several hours here.

Just 41 miles from Krakow is the Auschwitz-Birkenau complex, the notorious Nazi concentration camp. Tours from Krakow go there frequently for this sobering experience.

The barbican, once part of the city walls, still stands guard at one end of Rynek Glowny square in Krakow, Poland. Photo courtesy of Barbara Selwitz.

This centuries-old Jewish cemetery is in the Kazimierz area of Krakow, Poland. Photo courtesy of Barbara Selwitz. 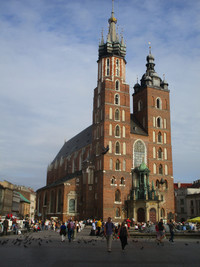 St. Mary's Basilica soars above Rynek Glowny, one of the most important squares in Krakow, Poland. Photo courtesy of Barbara Selwitz.

The barbican, once part of the city walls, still stands guard at one end of Rynek Glowny square in Krakow, Poland. Photo courtesy of Barbara Selwitz.