Sure, it's great to ooh and aah at the grandeur of the Grand Canyon, be overwhelmed by the blistered desert floor and extinct volcanic craters in Death Valley, and hear the thunderous roar of Niagara Falls. But Mother Nature also has created countless other treasures throughout the country that while less well-known are no less magnificent and wondrous in their ways.

No doubt some of these natural hidden gems are located within an easy automobile drive from where you live. A bit of research can reveal often-overlooked places that offer a variety of environments to meet any preference.

Coastal Louisiana, for example, is the setting for tours of brooding swamps where alligators like to hang out and fishing for fresh- and saltwater prey off piers, from the shore, in inland bodies of water and at sea.

Its location along a major migration route also provides a treasure-trove of opportunities for birdwatchers. The Creole Nature Trail in Lake Charles alone is home to more than 400 species of winged life, including waterfowl, wading birds and raptors.

Bottlenose dolphins rather than high-flyers are an attraction off Gulf Shores and Orange Beach, Alabama. Kayak and other tours through the waterways of Bon Secour Bay provide close-up and personal encounters with dolphins and other resident wildlife.

Gulf State Park provides an introduction to the nine different ecosystems found in the area. A good way to experience the diversity is to walk or bike along the 28-mile backcountry trail.

A very different water-related experience awaits visitors to the northwestern corner of South Carolina, which is referred to as "Upstate." It boasts the highest concentration of waterfalls in the United States. This proliferation is caused by the Blue Ridge Escarpment, a geographical phenomenon where the mountains dramatically plummet more than 2,000 feet within less than a half-mile. This sheer drop creates the conditions for more than 300 waterfalls, 100 of which are accessible to the public.

Continuing to wander in search of water, we come to Table Rock, Taneycomo and Bull Shoals lakes nestled in the Ozark Mountains of Missouri. Adding to their pristine appeal is their location just outside of the excitement and go-go entertainment of Branson.

While most people visit that popular playland for the stage performances, thrill rides and other amusement park attractions it offers, some in the know also take advantage of the surrounding beauty and recreation. The Ozarks are an ancient mountain range that while worn down by time and nature still are home to verdant peaks surrounded by hardwood forests.

Even without leaving the confines of Branson, visitors can experience this beauty in some unusual ways. Ziplines and other adrenalin-boosting trips carry riders through a cloud of tree branches. The Runaway Mountain Coaster at the Mountain Adventure Park allows people to choose to pass by the foliage at speeds more than 30 miles an hour or to use the brake to slow the descent.

Farther west, Utah is known as home to five of the most magnificent and most -visited national parks in the country: Arches, Bryce Canyon, Canyonlands, Capitol Reef and Zion. Far fewer people make their way to another natural attraction that is as inviting as it is unique.

The Fishlake National Forest is home to a grove of aspen trees that might appear normal at first glance yet are anything but. Called the Pando, a Latin word that translates to "I spread," all of the approximately 47,000 trees are genetically identical and share a single root system.

Estimates of the age of the grove stretch back as far as 1 million years, and some individual trees are more than 130 years old. Another attraction is the "quaking aspens," named for their leaves that stir easily in even a gentle breeze. This fluttering sound, emitted by tens of thousands of trees, accounts for the nickname "Trembling Giant" by which this unique grove is known.

Fauna rather than flora are the attraction at a wildlife refuge hidden on Oregon's coast and unknown to even many residents of the state. The 2,940-acre Jewell Meadows Wildlife Area lives up to its name in beauty, and the challenge facing visitors with a camera who chance upon it is how to stop shooting scene after scene.

The main attraction is a herd of some 200 Roosevelt elk that spend the spring and summer munching on blackberries and peering back at humans who come to watch them. In June visitors see new calves, and in September rutting elk battle it out in the meadows to establish their dominance.

Those magnificent animals, which can weigh as much as 1,200 pounds, share their habitat with many other creatures. Among frequent sightings are black-tail deer, coyotes, bald eagles and red-tailed hawks.

If none of these natural settings is close to your home, many others likely are. A few clicks on a computer can result in a selection with something-for-everyone diversity and appeal.

Roosevelt elk graze at the Jewell Meadows Wildlife Area on the coast of Oregon. Photo courtesy of Robert Brown//Dreamstime.com. 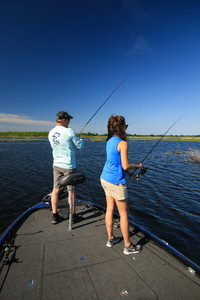 Roosevelt elk graze at the Jewell Meadows Wildlife Area on the coast of Oregon. Photo courtesy of Robert Brown//Dreamstime.com.