Spend a Holiday Marching With Penguins

If you are hankering to see "Happy Feet" up close and personal, you probably think you have to go the far ends of the earth and be outfitted for polar conditions. But meeting up with penguins doesn't have to be a challenging expedition.

My first delightful encounter was during a visit to the Edinburgh Zoo, when a gate opened and a parade of gentoo, king and rockhopper penguins took over the path in single file. The tradition began in 1951, when a keeper accidentally left the enclosure open and was followed around the zoo, much to the delight of the visitors. The tradition has continued. The gate is opened daily at 2:15 p.m., but the outing is purely voluntary on the part of the penguins, and occasionally, they choose to remain behind.

Nothing beats seeing them in the wild. Cruises during the North American winter months (summer in the Southern Hemisphere) around South America are the easiest way to reach their mating and nesting habitats. Most ships call at various wind-swept beaches around Tierra del Fuego at the continent's skinny tip — literally the most southern land before Antarctica.

We attempted to take a small boat tour from Punta Arenas to Magdalena Island's Los Pinguinos Natural Monument and got as far as the pier, but the port authorities closed the harbor due to unsafe sea conditions. Our second chance came a few days later in Puerto Madryn, Argentina. We had arranged for a van to take us 110 miles to Punta Tombo in the Strait of Magellan, the world's largest rookery, with 500,000 Magellanic penguins. Pebbled trails, wooden walkways and platforms are people-friendly, while the penguin nests are roped off. Guides make certain that if a penguin crosses your path, you back up to give it distance and allow its mates and/or offspring to toddle to safety as well.

This flock starts porpoising ashore in September and soon is marching to burrows in long columns, bowing, getting acquainted, courting, competing for nesting real estate and mating for life. The female lays her eggs in October, and the young hatch in November. With two nurturing parents foraging at sea and taking turns with their care, chicks thrive and start fledging in January — just as we arrived. The fuzzy babies were almost as big as their parents but are still fed by them. Hungry chicks brayed like donkeys when hungry, hence their nickname: the "jackass penguin."

Though the weather was breezy, temperatures were delightfully warm for us, but the penguins kept ducking into their burrows and under shady bushes, even hiding from the sun under the walkway bridges and benches. When penguins overheat, they pant like puppies and extend their flippers to catch a breeze. We followed adults comically waddling to the ocean and then gracefully diving into the surf, where these flightless birds "fly" underwater.

We had already had the astonishing experience of snorkeling with the Galapagos penguin in Tagus Cove off Isabela Island. These tiny penguins — the only species known to venture north of the equator — are about 19 inches tall, weigh 5 pounds and are comfortable in the ocean cooled by the Humboldt Current. Here I watched several lumber to a rocky ledge, dive in, zip past me like rockets and zoom amongst the sea turtles and baby sea lions.

There are several other accessible penguin opportunities. Phillip Island Nature Park — a 90-minute drive from Melbourne, Australia — is home to the smallest species. Each evening, these "little" or fairy penguins return after a long day of fishing to feed their young. Only 12 inches tall and weighing less than 3 pounds, they are found only in Australia and New Zealand. The preserve also offers visitors a peek at koalas, wallabies, elusive anteaters, seals and whales.

The southern tip of Africa offers numerous opportunities to view the African penguin, which has declined by 80 percent in the past 50 years because of pollution, development, climate change and irresponsible tourism activities. The Boulders Beach colony — part of Table Mountain National Park situated at the convergence of the Atlantic and Indian oceans on the Cape of Good Hope, about 24 miles from Cape Town — has boardwalk viewing areas to protect the birds from excessive human contact. Lucky swimmers may encounter penguins in the water with them.

New Zealand has the little blue Fiordland crested penguin and, rarest of all, yellow-eyed penguins — or, as the Maori call them, hoiho. The rugged sea cliffs of the Otago Peninsula on the South Island is a prime spot where these adorable birds share the stage with seals, sea lions, elephant seals and, of course, other penguins. Penguin Place, a conservation reserve on a private farm, offers a series of trenches and huts that allow close-up viewing while reducing disturbances to the animals — the world's most endangered variety, with only 3,500 left.

Other places in New Zealand to spot penguins include the Banks Peninsula outside of Christchurch, Omaru, Dunedin, the Marlborough Sounds, Stewart Island, the beaches of Munro and Timaru, and the Catlins Coast.

Every one of these colonies in South America, Africa, Australia and New Zealand requires a detour from mainstream travel, but the penguins never fail to charm. They are unafraid of humans and bring guaranteed happiness to those who seek them out.

A penguin nuzzles her baby on a beach at the Punto Tombo National Reserve on Argentina's central coast. Photo courtesy of Philip Courter.

Penguin parents head for the sea to do some fishing at Punta Tombo Reserve on Argentina's central coast. Photo courtesy of Philip Courter. 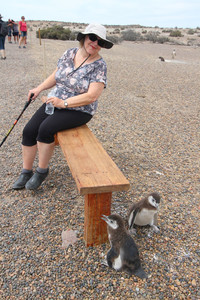 A penguin nuzzles her baby on a beach at the Punto Tombo National Reserve on Argentina's central coast. Photo courtesy of Philip Courter.