Come to Muscle Shoals for the Music

"Now Muscle Shoals has got the Swampers. And they've been known to pick a song or two. (Yes, they do.) Lord, they get me off so much. They pick me up when I'm feeling blue. Now how 'bout you?" — "Sweet Home Alabama," by Lynyrd Skynyrd

The Swampers were a group of session musicians who played at a small recording studio in the tiny Alabama burg of Muscle Shoals. In 1959 Rick Hall founded the first recording studio in the area in the neighboring town of Florence and called it FAME, which was an acronym for Florence Alabama Music Enterprise. He also discovered there was a lot of local talent in northern Alabama, so when someone came in to record a song, he brought in the boys — Barry Beckett (keyboard), Roger Hawkins (drums), David Hood (bass) and Jimmy Johnson (guitar) — who were officially called the Muscle Shoals Rhythm Section but unofficially the Swampers.

Hall scored a few minor hits before bringing in another local fellow named Percy Sledge to sing "When a Man Loves a Woman," which became a No. 1 record, and pretty soon such great soul singers as Wilson Pickett and Aretha Franklin were coming down to record.

Then in 1969 the Swampers had a falling out with Hall, and the musicians created their own music studio and called it Muscle Shoals Sound Studio. That only doubled the number of musicians coming in to town, including most famously the Rolling Stones, who recorded "Brown Sugar" and "Wild Horses" at the studio. Just about anyone who was anyone wanted to record in Muscle Shoals — Linda Ronstadt, Rod Stewart, Paul Simon, the Staple Singers, Bob Seger and many more.

I recount all this because both the FAME and Muscle Shoals Sound Studio are open to visitors, and for music buffs this surfeit of song is like finding religious relics. The latter studio closed in 1979, but the building has been completely restored and is chockablock with original instruments, artifacts and memorabilia. Even the bathroom has been preserved because Keith Richards sat in the quiet little space to write "Wild Horses."

The FAME studio, which once sat in the middle of open fields, has seen civilization catch up and surround it. Nevertheless, it is still open for business. I came in just after such singers as Steve Tyler (Aerosmith), Demi Lovato, Allison Krauss, Keb Mo and Alan Jackson had recorded and departed.

I sat in the recording booth with Rodney Hall, son of the founder who died earlier in the year. Rodney had been hanging around the studio since he was old enough to walk, so I asked who he remembered most from the old days. The surprise answer was the Osmond Brothers.

"I was about 7 years old and Donnie Osmond was slightly older," he said. "We used to play ball together."

In the old days singers would record together with musicians. Now, of course, singers may never even see the musicians. They just lay down vocal tracks, which are then digitally connected to either instrumentation or computer-generated sounds. When Lovato was here she had never been in a recording studio with real musicians, Hall said.

Music buffs flock to Muscle Shoals to visit the studios, but there is an extraordinary bonus to visiting the area. W.C. Handy, who wrote "Memphis Blues" and "St. Louis Blues" and is considered the father of the blues, was born in Florence. His boyhood home has been preserved and is now part of the W.C. Handy Birthplace, Museum and Library.

The 1912 publication of the "Memphis Blues" sheet music introduced to the world the 12-bar blues making it the first blues song for the masses. And unlike most blues singers Handy could write music, and that led to a successful career as a music publisher.

There are literally hundreds of items from Handy's life in the museum, but my favorite was a copy of "Rhapsody in Blue" sheet music on which George Gershwin inscribed these lines to Handy: "Whose early 'blue' songs are the forefathers of this work."

In nearby Tuscumbia sits the Alabama Music Hall of Fame. This is not to be missed if for no other reason than that so many great musicians were born and bred in Alabama or made their mark here, from Hank Williams to Nat King Cole, Dinah Washington to Tammy Wynette and groups such as Alabama and Shenandoah to Lionel Richie and the Commodores. They've all contributed to this enterprise and provided some great surprises, from Alabama's first tour bus to one of the few remaining Hank Williams performing outfits to the contract Elvis Presley signed with RCA Records. Dewey Phillips, the disc jockey who first played Presley's records on the radio, was from Alabama.

"Each time someone went to Muscle Shoals, they came back with a hit," singer Clarence Carter famously said. Go see why he was right.

While you're in the area, you might also want to visit the Helen Keller Birthplace and Home in Tuscumbia and Frank Lloyd Wright's Rosenbaum House in Florence.

The Alabama Music Hall of Fame in Tuscumbia honors the many musicians who have come from the state. Photo courtesy of Steve Bergsman. 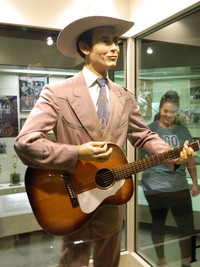 The Alabama Music Hall of Fame in Tuscumbia is home to one of the few remaining outfits Hank Williams wore on tour. Photo courtesy of Steve Bergsman.

Many famous musicians have recorded at the Muscle Shoals Sound Studios in Muscle Shoals, Alabama. Photo courtesy of Steve Bergsman.