Individual U.S. citizens who want to visit Cuba don't have to wait for the changes outlined by President Obama to occur. Right now, thanks to a unique, weekly cruise that circumvents the island, they could be in Cuba next Saturday, one day after boarding the vessel on Friday in Montego Bay, Jamaica.

The ship — leased from Cyprus-based Louis Cruise Lines and now in its second year of operation — makes five stops in Cuba during its clockwise circumnavigation of the island. Best of all, it also sails past the prime legal barrier that for years has kept most Americans away — a prohibition on spending money in Cuba. There is no barrier to actually visiting the island, just spending money there. Since the ship acts as hotel and prime source of food, passengers can — as my wife and I just did — walk off the vessel and be totally free to explore each and every port of call.

The cost of the trip was a third of what we would have paid had we chosen to join a highly structured group trip with an itinerary of meetings, demonstrations and events featuring pre-chosen Cubans who offer an "unbiased" look at life on their island.

Cuba Cruise is different. Our mid-January trip cost my wife and me approximately $3,300. That included $2,100 for a large room with balcony, all food, shows and normal shipboard amenities; two New York City-Montego Bay JetBlue tickets (approximately $850); and around $240 for wine and onboard Internet service. Best of all, when the ship docked we enjoyed total freedom of movement in every port.

Following the president's initiative to reduce barriers to U.S.-Cuba relations, the prohibition against U.S. citizens' spending money in Cuba appears to have been greatly weakened. That means M/V Cristal passengers should have no problem spending small amounts of money on the ground for food and transportation. Incidentally, the CUC (Cuban Convertible Peso) — the currency non-Cubans must use — is available either at or very near the terminal (such as in Havana, Cienfuegos and Santiago de Cuba) or at banks in town.

After Jamaica, which is easily reached nonstop from New York or via connections from other cities, the ship sailed to Cienfuegos. This is a UNESCO World Heritage Site that features a lovely center square (actually a rectangle!), the Parque Marti that is home to most of the city's prime sites. A 15-minute walk from the pier, this beautifully maintained site is named for Jose Marti, one of the giants in Cuba's 19th-century fight to free itself from Spanish rule.

Victory in that struggle is the reason for the 1902 triumphal arch at one end of the park that celebrates the birth of the Republic of Cuba. Also on the square is the gorgeously restored Teatro Tomas Terry, erected between 1886 and 1889, where performers included Enrico Caruso and Sarah Bernhardt.

A long walk took us to Palacio del Valle, a paean to Moorish-Spanish architecture erected as a private house between 1913 and 1917. Two stories tall with an interior restaurant and seaside views from its rooftop bar area, this over-the-top structure stirs memories of the Alhambra in Granada, Spain. We also stopped at Palacio Ferrer with its stunning blue cupola.

Next there was a stop at Isla de la Juventud (the Isle of Youth) for swimming, snorkeling and a walk in a nearby mangrove swamp. This preceded the highlight of our trip, a full day in Havana.

While fourteen hours is an impossibly short time to thoroughly explore Cuba's capital, the fact that the M/V Cristal docks steps from the heart of the Old City is a definite plus. .

Across the street from the cruise terminal is Plaza San Francisco, one of several remarkable squares featuring Spanish baroque buildings, and nearby are streets that lead to the heart of "Havana Vieja (Old Havana)."

Nearly five centuries old, Havana's founding occurred less than three decades years after the arrival of Christopher Columbus in 1492. We concentrated on the area between the port and capitol building since seeing everything in one day is impossible. The rest we'll cover on a return visit.

Highlights included the Plaza of the Cathedral, home to the 18th-century Cathedral of San Cristobal and its stunning baroque facade; the Plaza de Armas and its baroque Palacio de los Capitances Generales; the 16th-century Castillo de la Real Fuerza, Havana's oldest standing military structure; and the neo-classical El Templete, a 19th-century replacement for the original, which is believed to have been the site of Havana's first mass.

We also visited Plaza Vieja, which was originally lad out in 1559; strolled along incredibly atmospheric Calle Obispo; and then headed through the less-well-maintained streets and avenues en route to the Capitolio, Cuba's capitol building, which resembles the U.S. capitol in Washington D.C.

Throughout our walks, one constant was the friendliness of the people and the complete lack of worry about safety on the streets or any aggressive appearance by the military or police. Indeed, it was only the many shells of collapsed buildings standing unattended and sidewalks requiring continual checking before stepping that raised any concerns.

After Havana we relaxed during a day at sea before arriving at Antilla. There we joined a British couple who had hired a driver, his 1968 Ford and a guide to take us to the interior city of Holquin. Roads proved to be challenging, but spending a short time in a strictly commercial town — particularly understanding how little there was for residents to shop for and buy — was most instructive.

Our last port was Santiago de Cuba, the country's second-largest city. It boasts a thriving center square and a seemingly nonstop roster of musicians who virtually ensure that a Santiago visit will always be accompanied by good tunes.

Overnight, approximately 170 miles of sailing brought us back to our Montego Bay starting point. On the flight back to New York we reminisced about our extraordinary experience of visiting many highlights of a nation that essentially bypassed the last half-century of history. But we also confirmed our intention to return once direct flights to Havana are available without the present high cost and group travel requirements.

Cuba Cruise operates weekly with the last Montego Bay call being March 20. It plans to offer the same itinerary from mid-December 2015 through March 2016.

Cuba Cruise: Visit www.yourcubacruise.com or call 855-364-4999 for information and bookings.

Cuban Tourist Board of Canada: www.gocuba.ca 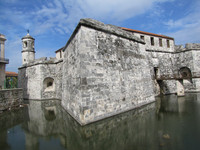 Castillo de la Real Fuerza is a highlight of a tour of Old Havana. Photo courtesy of Barbara Selwitz. 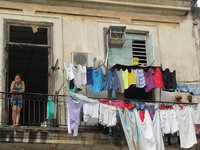 This scene is typical of life in Old Havana, Cuba. Photo courtesy of Barbara Selwitz.