I'm no Tarzana, roughing it in the wild. Therefore, when I chose to romance the wild of Alaska, trepidation accompanied my journey to Denali National Park and Preserve — the largest swath of wilderness in North America. Grizzlies. Wolves. Caribou. The promise of observing wildlife in their natural habitat, surrounded by beauty as it was centuries ago, was thrilling. Predators versus prey. Red fox versus please-don't-eat-me-now Arctic ground squirrels. The Alaska Range bathed in northern lights.

Bye-bye city congestion and cell towers. I'd explore the Interior of Alaska and a new kind of freedom surrounded by Denali's 6 million acres — the size of Massachusetts — which, incidentally, boasts North America's tallest mountain at 20,322 feet. Mount Denali, "The Great One" (also known as Mount McKinley), towers over forests, glacial lakes, frozen tundra and mountains, and it is popular with photographers, climbers and tourists eager to glimpse its often-cloud-shrouded peak. I'd have three days to embrace Alaska's wilderness and squash any trepidations about roughing it in the wild.

The train slowed for dramatic postcard scenes, including one atop a trestle bridge 296 feet above Hurricane Gulch, which is known for its sweeping high winds and beauty.

After seven hours of scenic train travel that I didn't want to end, a colorful low-elevation taiga forest greeted my arrival to the Denali Park Station. The Alaska Range and an alpine forest, like an impressionist painting, were in the distance. Sun rays pierced clouds, illuminating wild Denali: Evergreens, paper birch and aspen trees were alive with color. Wildflowers swayed in the light breeze — pink fireweed, purple lupine and yellow cinquefoil. I inhaled clean air, soaking in the serenity of my surroundings.

The Denali Princess Wilderness Lodge shuttle took me to their luxurious yet rugged property located steps from the Nenana River and the park's entrance. The lodge offered modern amenities: three restaurants, a coffee express, hot tubs and musical dinner theater showcasing "Music of Denali," which I'd enjoy with its Broadway-caliber talent. Hourly complimentary shuttles into the park were an added convenience. Organized day tours included flight-seeing, rafting, horseback riding and a covered-wagon ride. I opted for the popular Tundra Wilderness Tour, a photography hike and — for stretching out of my comfort zone and into "roughing it" territory — a heli-hike in alpine tundra.

I unpacked in my country-style room with a river view as birds sang their welcome. Then Ranger Kris Fister and I walked the Jonesville Trail, steps from my door, along the river and through a forest toward the Denali Visitor Center Campus, a beautiful mile-and-a-half walk. We observed lichens and mosses, mushrooms and birch trees, and women walking alone as I wondered, safe? Ranger Kris said she'd never encountered a problem between wildlife and humans but it was best to walk with a friend, keep talking to discourage surprising an animal and be aware of one's surroundings.

The solar-powered visitor-center campus included an award-winning natural history museum, the film "Heartbeat of Denali," a National Geographic bookstore and a restaurant, the Morino Grill. Ranger-led hikes and a sled dog demonstration were offered free of cost. Enjoying the film, museum and dog show was a perfect introduction to the park.

My Tundra Wilderness Tour began early on a blue-sky day. Our guide narrated the 53-mile bus ride into Denali National Park and Preserve on a 91-mile ribbon of road, the only one in the park. While our guide shared stories, tourists played wildlife lookout: "Look left. At 2 o'clock. A bear!" Tourists clambered over seats and each other to glimpse wildlife — a novel way to make new friends. Just as we might have observed wildlife in their natural habitat 10,000 years ago, I spotted two grizzlies eating blueberries by the side of the road, a bull moose foraging under a tree, a herd of caribou migrating across the plain and an Arctic ground squirrel popping its head up roadside, as if to say, "Hi, strange people." Dall sheep rested on steep cliffs beyond easy reach of hungry wolves. With clear visibility, we saw the massive snowy peak of Mount Denali. We stopped for "I was here" photo opportunities, and at our last stop, the Toklat Visitor Center, I bought a "Passport to Your National Parks" booklet — stamp please.

Former hunter-turned-conservationist Charles Sheldon studied Dall sheep in this area from 1906-08 and wanted to save them from overhunting. Politically savvy, Sheldon helped preserve what became Mount McKinley National Park. In 1976 President Jimmy Carter designated this park an international biosphere reserve focused on ecosystem preservation, and in 1978 he created the Denali National Monument, thereby protecting Mount Denali, its land and wildlife. In 1980, the massive 9,492.2-square-mile wilderness became Denali National Park and Preserve.

The next morning I was ready to rough it despite feeling trepidation about going out of my comfort zone and into a heli-hiking wilderness experience. I was a warm-city gal on a cold Denali day. A helicopter would drop me and a guide around 5,000 feet to hike on soft alpine tundra — no trails, no people. I was told that tundra is like walking on a mattress, and the Denali views and countless mountain peaks surrounding us would be breathtaking. I was ready. Layers. Fingers crossed. But the season's first snow descended at higher elevations. The closest thing to roughing it I'd planned was canceled, leaving perhaps another year to prepare.

That evening I continued not roughing it with Terry Boyd, who picked me up at the lodge in his heated van for a photography tour at dusk. Off the beaten path, Boyd and I discussed lenses and lighting. He lent me a tripod and we went to work: Reflective pond. Running rivers. Close-up wildflowers. Focused beauty at every turn and a lovely finale to my trip full of Denali's immense natural beauty.

The Denali Visitor Center is open May 15 to mid-September: www.nps.gov/dena/planyourvisit/the-denali-visitor-center.htm. 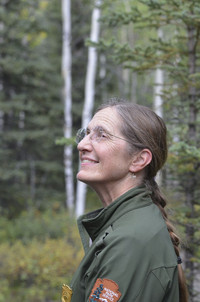