Experience the Old West in Hawaii

A day trip to the famous Parker Ranch, located at 2,500 feet between high volcanoes in the heart of the Big Island, Hawaii, is like a trip back in time. Since 1832, when Kamehameha III sent to California for vaqueros, the Hawaiian cowboys, called "paniolos," have rounded up and branded thousands of Hereford, Angus and Charolais cattle to be pastured or shipped to Honolulu or the mainland. Currently the ranch owns approximately 19,000 head of cattle and 125 horses.

What visitors experience today is the ambience of the Old West, Hawaiian style, a quiet atmosphere that can be found in one of the original Parker homes and two museums.

The delightful Parker Ranch Shopping Center in Waimea continues this western theme, selling cowboy hats, clothing, jewelry and souvenirs. Adjacent to the gift shop is the Parker Ranch Broiler and Bar, plus a large food court and various other shops.

In close proximity is the Paniolo Heritage Center at Pukalani Stables, dedicated to preserving and promoting the heritage of the Hawaiian cowboy. To get there from Kona on Highway 190, take a right at the stoplight by Ace Hardware. This is Pulalani Street, which will take you straight to Kukalani Stables. Here you can visit an interesting museum that is part of the Parker Ranch heritage. If you happen to arrive on a Wednesday, you can attend the Waimea Midweek Market from 9 a.m. to 4 p.m. and visit the museum for free.

The word "waimea" translates from Hawaiian to mean "reddish water," the color streams are turned by eroded soil. When the U.S. Postal Service had problems distinguishing this name from the same names on other islands, they renamed the town Kamuela, the Hawaiian word for "Samuel," the grandson of John Palmer Parker who founded the Parker Ranch.

In 1809 John Parker, a 19-year-old ship's clerk from Massachusetts, arrived in the Sandwich Islands (now Hawaii and what would later be called Big Island, though locals prefer the original name). He liked what he saw and jumped ship.

Parker soon befriended the king, Kamehameha I, learned the Hawaiian language and in 1816 married the king's granddaughter, Kipikane. He entered the cattle business when Kamehameha gave him permission to hunt herds that roamed the upper plains of Waimea. The cattle were descendants of five head given to the king by Captain George Vancouver 20 years before. Since no one had been allowed to harm them, the cattle had multiplied and grown wild. Parker began hunting them, and a new industry of beef, tallow and hides was begun. Parker was granted two acres upon his marriage; then in the 1850s his wife was granted 640 acres of adjacent pastureland, and that was the start of the ranch.

Over the years the Parker Ranch expanded until at one time it was the largest privately held ranch in the United States with more than 500,000 acres. Today is consists of 130,000 acres, ranging from foothills and valleys to the mountain slopes of the 13,796-foot Mauna Kea.

To visit one of the original family houses and a museum, drive south on Highway 190 (the Mamalahoa Highway) for a mile to the ranch headquarters. The gates are open between 8 a.m. and 4 p.m. for visitors, and there is no charge. Proceed down a long tree-sheltered road past a field of horses to a circle at the end where a few buildings are located. Directly in front is a yellow house called "Puuoelu," which was the home of sixth-generation Parker family member Richard Smart.

Smart was the last owner of the Parker Ranch before it was turned into the Parker Ranch Foundation Trust, which benefits medical, educational and charitable activities. Having lost his parents as an infant, Smart was raised in the San Francisco Bay Area by his grandmother but spent summers in Hawaii. Instead of ranching as he was expected to, he trained in the theater and spent his life performing on Broadway and in Europe. His house became filled with the European art and furniture he collected during his travels.

Smart returned to run the ranch in 1960, initiating many improvements. Much of the art he displayed in his home, especially the very valuable French Impressionist paintings, had to be sold after his death in 1992 to pay estate taxes, but there is still a valuable collection on view in the living room and dining room.

Next door is a garage with three samples of antique carriages once drawn by horses. A two-story white house next to the carriages has been converted into a museum containing original furnishings, photographs, old Hawaiian-made saddles, clothes and other items representing six generations of ranch life.

The beautifully landscaped gardens are also worth a visit. A large memorial built behind the house marks Smart's burial place — a fitting end to a visit to the Parker Ranch.

Waimea is located near the junction of Highways 19/190 in the north-center of the Big Island of Hawaii. It is only 39 miles from Kailua-Kona on the west coast, which takes about an hour on a two-lane road, Highway 190. The time from Hilo on the east coast is estimated to be one hour and 20 minutes on Highway 19.

Waimea celebrates a Cherry Blossom Festival the first week of February each year and a bang-up rodeo and horse races on July 4. 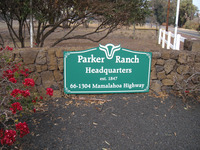 Puuoelu, the home of Richard Smart, last owner of the Parker Ranch in Waimea, Hawaii, displays pieces of art he brought back from European travels. Photo courtesy of Patricia Arrigoni.

This undated photo on public display in the Parker Ranch Broiler in Waimea, Hawaii, shows visitors how a roundup was held in the ranch's heyday. Photo courtesy of Patricia Arrigoni.