Their bodies were sleek and graceful, the skin soft to the touch, their demeanor welcoming even if a bit skeptical. Still, they were more used to this than I was. I spread my arms out as instructed and flapped them in the water. Romeo and Pasku, two of my dolphin snorkeling companions, then swam under my outstretched limbs, and we lay back into the water as though sunbathing. Then we went back to free swim.

Such is one of the many highlights at the Dolphin Academy, one of several up-front-and-personal animal encounters available at the Sea Aquarium on the Caribbean island of Curacao.

I don't usually like watching animals perform tricks that are alien to their DNA for the amusement of tourists, but at the Dolphin Academy the residents are treated with such loving care that I swam alongside them with minimal guilt. According to trainer Yvette, the dolphins are the first priority.

"They are on a very light work schedule, and every day it varies," she said. "Like humans, they react better when their life is not all that predictable. And if for any reason they don't want to perform — perhaps they're preoccupied with a personal family situation — the program is called off."

As if on cue, a participant related a past experience in which dolphins used to give rides to people holding onto their fins. Not anymore. Although it doesn't harm the dolphins (some disagree), the academy got a lot of criticism in the past. Clearly the dolphins didn't like it, so it was stopped years ago. I nodded; point well taken. Score one for the dolphins.

Prior to the snorkel, Yvette instructed us on how to proceed: Be patient, let them come to you, stroke them along their flanks. She taught us how to encourage the dolphin to come alongside and then free dive in unison. Romeo and I shared a number of shallow dives together, and in parting he gave me a kiss. OK, so he did it because he got a fish, but I still thought he was actually smiling at me at the time.

Dafne Greeven, a dive instructor from The Hague, Netherlands, said she had seen dolphins in the ocean but had never interacted with them.

"Most animal encounters are much more commercial," she said. "Snorkeling with them was a very special personal experience. It was wonderful to see how well they treat the dolphins here and encourage us to be relaxed so that the dolphins will be."

That was only the start of my very personal connection with sea life in Curacao. My next encounter took me even farther underwater. I've been snorkeling before — but never in the past did the fish swarm to me rather than my having to swim out to them. But then again I don't usually carry a supply of squiggly little sardines with me when I go while at the same time making meaningful eye contact. Well, meaningful to me anyway.

But at the Dolphin Academy getting up close and personal with a variety of denizens of the deep is the whole purpose. So there I was, comingling with tarpon, common snook, French grunts, permit fish, horse-eye jack and so many stingrays that I felt covered most of the time by a soft, lightweight blanket caressing my body — only this blanket wanted to be fed fish that it ate with its underbelly.

I wasn't really surprised to find the huge loggerhead turtles and sharks behind a Plexiglas shield and fed through small holes in the glass. Still, the shark didn't look any less menacing for being behind protective covering. I carefully followed the instructions on when to feed them directly and when to take better care of my fingers. There's not always a second chance to do that with a shark.

Ah, so many fish, so little time. I fed as many as I could in the 35-minute feeding frenzy and came away with a new respect for the difference between just snorkeling and actually swimming with the fishes.

Back on land, my next animal rendezvous was of a more playful nature. I got to meet and greet Snapper, the sea lion. I learned the difference between sea lions and seals and watched Snapper do a seal imitation as he flopped along on his belly. Sea lions are much more genteel when they move — they walk on all fours. Using flippers, of course, but still. Snapper had a bit to say during our tete-a-tete, but his vocalization unfortunately resembled a very loud, deep belch that tended to continue long after it was socially acceptable. But still he was very cute and, like Romeo, very affectionate. Yup, I got another kiss. Between the two I got more action that weekend than I remember occurring at the height of my dating days.

And, of course, although all these activities are outside, all COVID-19 protocols are being followed: Mask-wearing is required, and social distancing is maintained. The dolphins are exempt; I'm not sure about Snapper.

The author swims with Romeo the dolphin at the Dolphin Academy, Curacao Sea Aquarium. Photo courtesy of Victor Block. 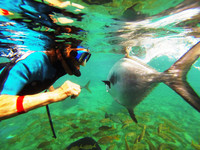