The Sissinghurst Castle Garden Was Cultivated With Love

Our coach rolled through the Kent countryside 62 miles southeast of London toward the English Channel. Our destination: Sissinghurst Castle Garden, one of Britain's most famous gardens and among the most influential plant collections in the world. Combined with its history as a Saxon pig farm, an aristocratic manor house and a prison for French sailors during the Seven Years War (1756-1763), my visit here with my Aunt Magdalena went beyond my expectations.

When author-poet-garden designer Vita Sackville-West and her author-diplomat husband, Harold Nicolson, purchased the abandoned 460-acre estate in 1930, their vision to restore the neglected land and romantic Tudor buildings turned into a 30-year labor of love. Vita fell for the 16th-century tower, which would become her private sanctuary.

When our tour guide reminded us that the coach would return for us in four hours, that seemed like an eternity. But it didn't take long for us to get into the rhythm of unrushed time to explore the expansive grounds freely.

First we climbed the spiral staircase of the tower leading to Vita's private writing room. Each night by candlelight she wrote her novels and poetry, designed the gardens and wrote her newspaper column about gardening. The room was left exactly as it was when she died at the age of 70 in 1962 — her desk, rugs, paintings, books galore and portraits of Harold as well as Virginia Woolf, with whom she shared a secret liaison discovered by her son after her death.

Descriptive placards describe the transformation of the tower, Vita's Writing Room and "A Confession," the discovery of Vita's manuscripts by her son Nigel Nicolson. A patch of the original wall was left exposed, showing French inmates' barely visible graffiti of the merchant vessels on which they had likely sailed. They occupied the tower and called it Chateau de Sissinghurst, French for Sissinghurst Castle. (The spiral stairs ascended clockwise, which was a typical design for medieval towers that exposed the bodies of sword-wielding enemies.)

The tower set the mood as we continued to the rooftop and looked out to the 10 garden "rooms" Vita designed. On the other side, we overlooked the South House containing Harold's office, including his expansive book collection and the couple's bedrooms. Steps away, the Priest's House was where their two sons had their rooms. It was also where the family ate meals together. Views beyond went as far as the eye could see.

We got lost in Vita's garden rooms that were separated by hedges or brick walls. Scattered benches invited us to immerse our minds in the tranquility of the "secret" patches. Vita's taste for natural and wild (she did the planting) and Harold's keen eye for geometry (he oversaw the architectural planning) is a remarkable display of the love they shared for nature.

Each garden was created with a theme. The White Garden, within view of Vita's office, overflows with white irises, white gladioli, white pompom dahlias and white Japanese anemones. The Rose Garden, among the world's finest collection of roses, includes the Rondel, the circular-shaped hedge Harold designed.

The South Cottage Garden outside Harold's office is a bright summer display of reds, oranges and yellows. The climbing rose Madame Alfred Carriere against the wall of the cottage was Vita and Harold's first planting when their offer for the property was accepted. The Herb Garden is best described by Adam Nicolson, grandson of Vita and Harold: "Only the beautiful, the pungent and the elegant are allowed here."

The Nuttery was an ancient nut path and a big attraction for Harold. The Kentish cobnuts are a special variety of hazelnut cultivated only in the Kent region. The Lime Walk was designed by Harold and included colorful plantings and pleached limes uniformly lining the York stone walkway. He kept 16 years of notebooks detailing plantings, flowering times and the quality of the plants throughout each year.

Delos pays homage to the Greek island, which the couple had visited together. Their vision was to capture the Mediterranean mood with stones, columns and plants from the region. Unfortunately, the original garden did not survive due to England's northern climate. But the couple's vision for Delos has been recently reimagined with new plantings of Greek origin that are conducive to cooler climes. The Delos redo will open in spring 2021.

The Moat Walk that stretches along the remains of the Elizabethan wall is filled with white wisteria and yellow azaleas planted by Vita in 1946 with the earnings from her poem "The Garden."

The Orchard, designed to be wilder than the other gardens, thrives with long grasses, old apple trees and walking paths mown through the long grasses. Busy bees make honey from the apple blossoms, and in 1969 the gazebo was erected here in Harold's memory. The Purple Border thrives with not only purple, but also blue, lilac and pink plantings.

After hours of meandering and ready for a coffee and a light bite, we found a window table at the Granary Restaurant a few yards from the Tower. Everything on the menu is made fresh, and gorgeous vegetables come from the state-of-the-art year-round garden outside. If that's not enough, there's always Sunday roast or high tea.

Vita and Harold had never envisioned that their residence would become a public garden. And just as Vita had her love affairs, so, too, did Harold. They respected one another's private lives. Perhaps the secret to their lasting marriage and partnership was that respect and their common love for Sissinghurst.

The garden rooms at Sissinghurst Castle are listed in the National Trust for Places of Historic Interest or Natural Beauty: www.nationaltrust.org.uk/sissinghurst-castle-garden.. 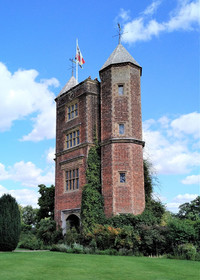 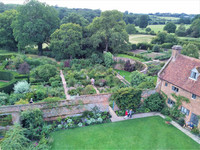 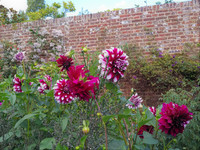