In 2004, a little independent film about a pair of mismatched middle-age buddies on a wine-tasting adventure in the Santa Ynez Valley emerged as the surprise hit of the season. It went on to win the Academy Award for best adapted screenplay, along with nominations for best film, director, supporting actor and actress.

The success of "Sideways," however, was not limited to the box office. The film also proved a boon to tourism. The film's locations in Santa Ynez Valley and such popular hangouts as the Hitching Post 2 restaurant became Hollywood-style celebrities. There's even a "Sideways" Wine Trail Map so that you sip in the footsteps of Miles Raymond (Paul Giamatti) and Jack Cole (Thomas Haden Church).

Another unexpected result of the film was a surge in the sales of Pinot Noir (Miles' drink of choice): "I mean, oh, its flavors, they're just the most haunting and brilliant and thrilling and subtle." Meanwhile, his denigration of Merlot — "If anyone serves Merlot, I am leaving!" — caused sales of the noble varietal to plummet. Fortunately, while effects of the film have been long-lasting, sales of Merlot have recovered.

The popularity of the movie may have faded, but it still remains a definite presence in the Santa Ynez Valley, particularly at the Hitching Post 2 Restaurant in Buellton (look for the poster and pictures of the stars on the walls) and in the tasting rooms of Solvang. You can even book at room in Buellton at the rebranded and renovated Sideways Inn with its distinctive windmill. It's the same motel where the buddies stayed. But back then it was a Quality Inn.

The real trick, if you're looking for the Santa Ynez Valley/"Sideways" experience, is to combine the best of the old with the best of the new. The Hitching Post 2 restaurant (on Highway 246) with its big yellow sign featuring the HP cattle brand, was a popular destination long before Miles and Jack started hanging out at the bar. The Ostini family opened the original Hitching Post in the town of Casmalia in 1952. But it's the Hitching Post 2 (founded in 1986) that's the star eatery and bar featured in the movie.

Stardom has not spoiled the restaurant. It is family-friendly and cozy, especially around the bar, where the wine list prominently features the house-produced vintages. The meat is grilled on a flaming grill (ask for table seven if you want the perfect view). A house special, though pricy for what it is, is the grilled artichoke. The grilled quail appetizer is a standout. Reservations are recommended.

Though they have nothing to do with the movie, by all means explore the other fine eateries the valley has to offer, including the remarkable and historic stagecoach stop, the Cold Spring Tavern; The Gathering Table at the Ballard Inn (in Ballard); Pico and Bell's in Los Alamos; and the Wine Merchant Cafe in Los Olivos.

"Sideways" aside, the Santa Ynez Valley is a wine-producing region that in every way rivals Napa and Sonoma. You can easily spend an entire day sipping your way along the Foxen Canyon Wine Trail from (among others) Andrew Murray (specializing in Rhone varietals); Fess Parker, featuring fine wines, beautiful grounds and coonskin caps (try the Viognier and their special blended red, Big Easy). Keep on going and you'll come to Zaca Mesa and Foxen.

For a more concentrated wine-tasting experience, simply drive to the town of Los Olivos and park. Within a three-square-block radius you'll find more tasting rooms than you can ever sample at one time. Personal favorites include the Epiphany tasting room and Barbieri, a limited-scale operation run by Paolo Barbieri and his wife, Erin Kempe. The couple will greet you and be happy to share their range of superb full-bodied red wines made in the Italian tradition.

If you're looking for a wine-tasting experience with a definite touch of class, make plans to visit Sunstone Vineyards and Villa in Santa Ynez. The property is characterized by its Provencal French courtyards, stone barrel-aging caves and picnic grounds. In the upcoming "Star Trek" creation, "Picard," Sunstone is the location chosen to represent Jean-Luc's family vineyard.

One of the most exciting new wineries in the valley is Brick Barn wine estate. The vision of Norman Williams, a longtime resident, rancher and developer, Brick Barn is named after its unique setting in a restored and renovated brick barn that dates back to the 1800s. Brick Barn released its first wines in 2017, and the new winery, tasting room, and indoor and outdoor hospitality venue opened in 2018. Brick Barn's winemaker, Adrian Bolshoi, is a rising star.

Only three hours north of Los Angeles, the Santa Ynez Valley is one of Southern California's great getaways. Be sure to try the Pinot Noir, but don't be afraid to order the Merlot! 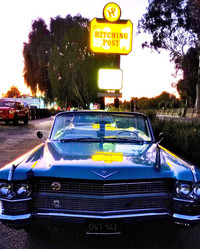 The Hitching Post 2 restaurant in Buellton, California, is one of the locations used in the popular 2004 movie "Sideways." Photo courtesy of Jim Farber. 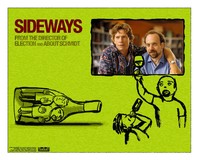 This poster advertises the popular 2004 movie "Sideways," which was filmed in California's Santa Ynez Valley. Photo courtesy of Jim Farber.