On the summit of Corviglia Mountain and overlooking the Swiss village of St. Moritz, I'm greeted with the bluest of skies, a smiling sun and a treeless snowy landscape as smooth as a white carpet. The thought of skiing the slopes of the world's first winter resort is nothing short of a dream. Standing 8,156 feet above sea level and overlooking snow-covered peaks makes me feel on top of the world.

The sun I speak of when I exit the funicular is the logo of St. Moritz, a registered trademark since 1937. In 1986, "St. Moritz" was added to the logo, making it the first geographical location on the planet to own a trademark.

Then I learn the backstory to St. Moritz from long before it became a discreet winter hotspot for royals, the well-to-do and celebs from Charlie Chaplain, Audrey Hepburn, Alfred Hitchcock and Brigitte Bardot to the Kennedy family, Robert De Niro and Kate Moss.

With more than 300 days of sunshine each year ,St. Moritz, tucked into the Upper Engadin Valley high in the eastern Alps near the Italian border, began attracting wealthy British visitors during spring, summer and fall.

But in 1864, Johannes Badrutt, owner of a 12-room mountain inn called the Kulm, made his famous bet with skeptical British guests to return the following winter. If they weren't happy, he would pay all their travel expenses. If they liked it, they could stay for as long as they wished. They came that winter - and stayed until spring.

Word spread about St. Moritz and more families escaped Britain's bleak weather, launching the opening of the first tourist office in Switzerland and the start of winter tourism in the Alps.

St. Moritz's "champagne climate" inspired innovative British guests to invent outdoor recreation at the Kulm, giving birth to the Cresta Run (a skeleton racetrack built from scratch each year) and bobsledding (also known as tobogganing). Soon the formation of the St. Moritz Tobogganing Club and Cresta Club, still active today, brought intramural sports — and competition — to the Kulm. The developments were transformational.

And on a tour of the legendary Kulm local history comes to life. Franziska Glunz, public relations manager at the hotel, leads me down a corridor into Badrutt's original 12-room inn that has been brilliantly preserved. Dim lighting, low ceilings and creaky floors swoop me back in time.

Original signage remains on the door to the living room that is now an executive office. And when Glunz notices me examining the size of the doors she explains that "people were smaller back then."

We return to the Kulm's present-day lobby, seamlessly attached to the ancient inn. Amid Grecian columns and alpine chic decor, rustic roots are remembered. I feel the warmth of a grand living room when I see Badrutt's portrait hanging on a wall and a young boy warming up by a crackling fire.

The hallway off the lobby honors the winter sports legacy of the Kulm with vintage photos of early guests at the top of the Cresta Run and a jaw-dropping collection of trophies and memorabilia befitting a museum.

The Kulm's guests of yesteryear would hunger for the gastronomic adventures under its roof: The Pizzeria, The Bob, Grand Restaurant, Chesa al Parc, Kulm Country Club and two winter pop-ups — Peruvian cuisine at Sunny Bar by Claudia Canessa, said to be the oldest bar in the Alps, and Asian-influences at Michelin-starred The K by Tim Raue.

At the foot of the Piz Bernina, the highest mountain range in the eastern Alps (13,284 feet above sea level), the spectacular landscapes are Mother Nature's gifts. When I realize that I've never stood on a frozen lake before I ask the concierge to point me in the direction of the lake. On my way down through the village I drool at window displays at glitzy Prada, art galleries, and Conditorei Hanselmann cafe and confectionary that dates back to 1894.

A steep escalator takes me down to the legendary lake. As pristine as a snow-blanketed field, it's mind-boggling to think that each winter horse-racing, polo and cricket competitions take place right here.

I walk gingerly toward the middle of the lake and turn to look up the hill. There, overlooking the sun-kissed valley, is the ever-present Kulm.

It's magical here. I recall my ski day on the Corviglia when I shared the Kulm's ski shuttle with a friendly Austrian mother and her two young children who come to St. Moritz every winter. I asked the kids if they like skiing. Big brother, then little sister grinned from ear to ear. 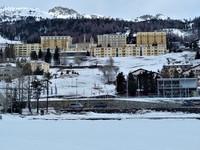 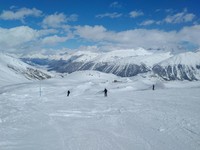 The "White Carpet" of Corviglia Mountain above St. Moritz provides a tranquil, treeless landscape in which to ski. Photo courtesy of Athena Lucero. 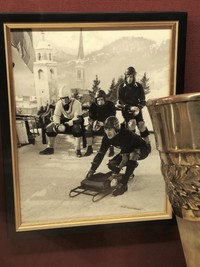 A corridor in the Kulm Hotel in St. Moritz, Switzerland, displays trophies and vintage photographs of early guests on the Cresta Run. Photo courtesy of Athena Lucero.

The "White Carpet" of Corviglia Mountain above St. Moritz provides a tranquil, treeless landscape in which to ski. Photo courtesy of Athena Lucero.